CartoDB at Mobile World Congress: The importance of Location and Mapping with Mapbox and Factual 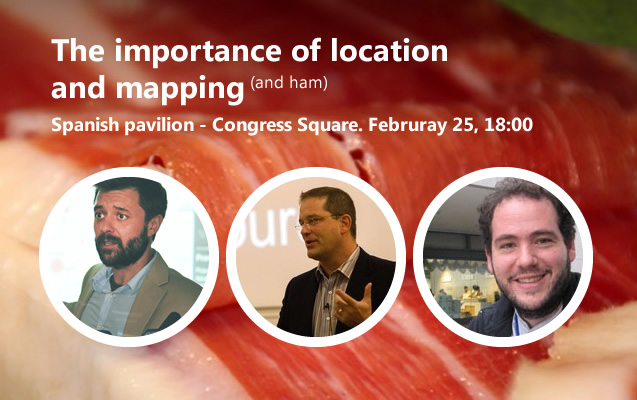 Join us next week in the Mobile World Congress in Barcelona. Apart from learning about CartoDB in our stand, don’t miss the panel (with drinks and jamón!) we are having with Mapbox and Factual: The importance of Location and Mapping (Spanish Pavilion / Congress Square / CS60, Tuesday 25th of February at 6PM)

Location goes hand-in-hand with mobile phones. Open data is changing the game, making it possible to incorporate real time and unique data feeds into custom maps. Join three open source entrepreneurs for drinks & jamon at MWC, where we’ll talk about the data that is transforming mobile mapping and new ways of visualizing it. Sign up for your invite!

And also remember that if you want to assist to the MWC, we are giving away two tickets!

Javier de la Torre is CEO at CartoDB, a global startup democratizing data analysis and visualization on maps. He is a former scientist with a research focus on Biodiversity Informatics and Global Environmental change. Javier believes that better data visualization tools will make organizations and society more data driven and therefore being more efficient and transparent. He is a recognized expert on Open Data, Open Source software and Data visualization and has been featured in many publications around the world like The Guardian, Business Insider, Wall Street Journal and has presented at conferences such as Where 2.0, Visualized, SXSW.

As CEO of Mapbox, Eric coordinates product and business development. Eric is passionate about open data and building open source data visualization tools focused on speed and design. Prior to Mapbox, Eric co-founded Development Seed. Eric is a recognized expert on open data and open source software and has been featured in publications including the New York Times, Nightline, NPR, and others. He is frequently invited to speak on topics including open data, data visualization, and open source business models and has presented at conferences such as SXSW, Web 2.0, Where 2.0, GOSCON, and NodeJam. He holds a master’s degree in international development from American University in Washington, DC, and has dual bachelor’s degrees in economics and international relations.

Tyler Bell leads Factual’s product initiatives in global place data and contextual audience platforms. He is a former archaeologist of late Roman and early medieval Europe, with a research focus on GIS and anisotropic cost surfaces. Tyler led Product for Yahoo’s Geo Technologies Group and received his PhD from the University of Oxford. He has broad interests in open source and place-based information systems. Tyler opines occasionally on data- and geo-technologies for O’Reilly at http://strata.oreilly.com/tylerb