The horrific shooting occurred on July 20 in Colorado has reignited the debate in US over gun control. How bad is the problem?, asks The Daily Beast in a new piece of data journalism based on a list of 431 shootings in US with more than one victim since 2005.

The project it’s the first of a new collaboration between The Daily Beast / Newsweek and CartoDB. This is a screenshot of the piece:

And here there is a detailed image: 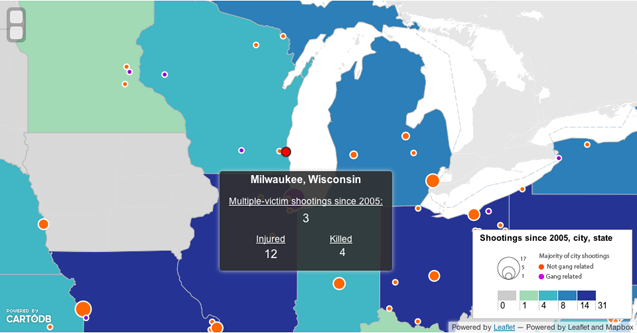 We asked Brian Abelson and Michael Keller, from the Daily Beast’s graphics team, about their experience on this in-depth data analysis of the so-called “shooting epidemic”.

“The story started with Brian finding a PDF of over 400 multiple victim shootings from 2005 to 2012 from the Brady Campaign to Prevent Gun Violence and wanting to show the frequency that these tragic events seem to happen in the US”, says Michael Keller.

“The idea was to give context to the recent shooting in Aurora, Colorado by seeing how many of these public shootings take place in a given year. Because no dataset is 100 percent comprehensive, we asked our readers to submit articles of shootings that we missed and give them context by letting readers submit their memories of shootings near them”, he adds.

They received over 350 responses. The memories submitted by readers are available here.

“The key challenge was how to extract and visualize meaningful information from the data given a strict deadline. We started with a pdf-formatted list of 400-plus shootings from the Brady Campaign on Saturday morning and needed a functional interactive map by Sunday night”, says Brian Abelson.

The project, as Keller says, was inspired by sites like Homicide Watch —also a favorite of the CartoDB team. This approach shows how linking an event to the place it occurred help engage readers and promote a new breed of collaborative data journalism projects.

“For me, being able to see how our readers are affected by the news and the memories they see in the headlines is really amazing —and makes our job as journalists really quite rewarding”, adds Keller.

Our first collaboration with The Guardian, a time lapse map of Syrian casualties

A Code for America's open city tool powered by CartoDB