Things are moving fast in the mapping community #SOTMPDX

While still only three-quarters of the way through the year, 2012 will definitely be referenced as an important year for maps. In 2012 Google began charging for maps, ESRI bought up some title=”ESRI buy GeoIQ”>key</a> geospatial innovators, Amazon launched its own title=”Amazon maps”>maps API</a>, and everyone knows Apple launched its own maps app. While at the same time, we saw many important online maps providers, including Apple, Craigslist, Wikipedia, and FourSquare, finally make the move to OpenStreetMap.

It seems like the community was just waiting for a moment to come together and reflect on these changes and make more plans for an exciting future. This past weekend some of that energy discharge at the State of the Map conference in Portland. We were proud to both sponsor and present (including the visualization of Madrid OSM edits linked below) at the event and we couldn’t be more pleased with how it went. 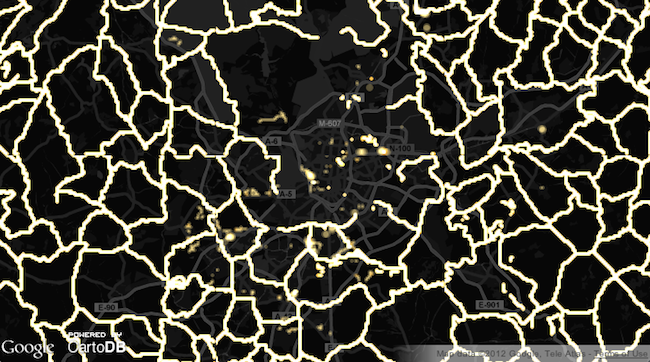 We heard great presentations on the title=”mapnik”>future of Mapnik</a>, the work that goes into assembling and designing a global terrain layer, and the developments of OpenPlans, Flickr, FourSquare and many others on work related to OSM data. And although we’ve been aware and excited about their success for some time now, MapBox used the opportunity to open a community discussion around their recent Knight Foundation grant and plans to build tools to support OSM development. Just following the event we also got news of the Natural Earth v2 release candiate; what an amazing resource for the community!

As avid users of OSM data, we are truely excited by all the progress we see happening. It is always great to get into the same room with all the other fantastic groups and individuals working at the confluence of open data, GIS, and cartography. Our point of view is definitely bias, but we are excited to say the least about the future of mapping online. Not only are we excited by all that is being done around us, but we are also excited to contribute to that future.

Those that made it to our CartoDB + OpenStreetMap presentation (inline below) might have heard some hints of things to come in CartoDB 2.0. One of the most relevant innovations to this discussion is that the CartoDB platform will make it easier than ever to combine and manage OSM baselayers with your projects and data (sneak peek of the basemap selector above). If you thought creating high quality maps and data visualizations in CartoDB was easy before, you are going to be amazed with what you will be able to do in 2.0. Stay tuned, get excited, and speak-up. We’ll continue to tap into and contribute to the progress of communities like those that converged at SOTMPDX in order to bring you innovative new tools to make your maps more beautiful, powerful, and easy!

How we made the stratos freefall jump live demo