Greenpeace is transforming idea into action by using data visualization to show the concrete danger that petrol poses. 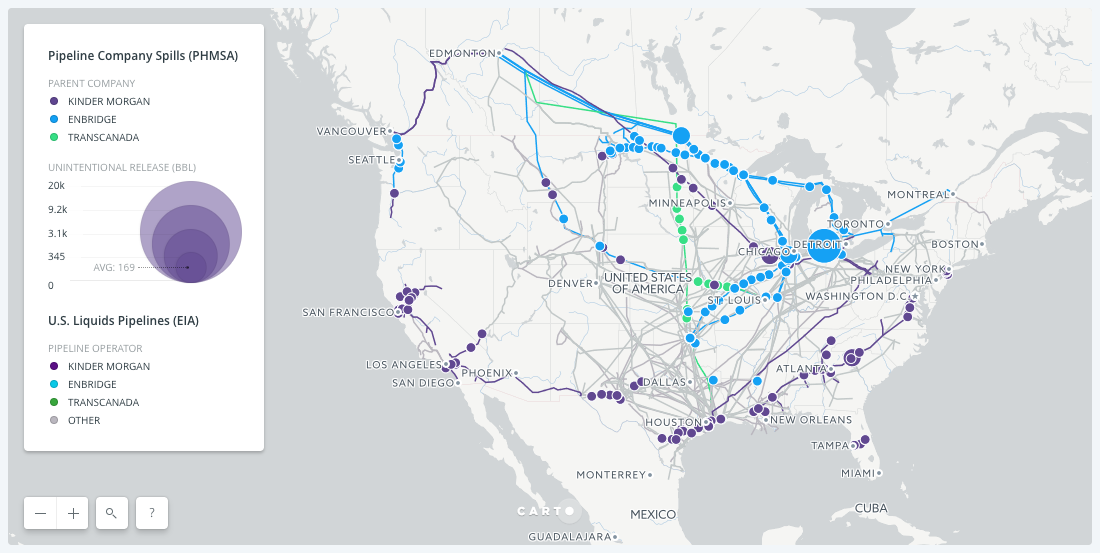 We've all seen the controversial Keystone XL Pipeline in the news and every few months we hear of a catastrophic oil spill.

On an intellectual level we can condemn these disasters but to transform that idea into action activists need to persuade citizens that the threat isn't just an abstraction.

In a recent campaign Greenpeace USA and Greenpeace Canada accomplished exactly that by using data visualization to show the concrete danger that petrol poses.

With the help of the Pipeline and Hazardous Materials Safety Administration's records of the location of every pipeline's "unintentional release " Greenpeace was able to visualize the oil spills relevant to their campaign with CARTO.

The end product was the map pictured above which shows the existing pipeline routes of three companies: TransCanada (green) Kinder Morgan (purple) and Enbridge (blue).

All of these companies would transport oil from Alberta's tar sands to consumers throughout the United States in a way that the corporations swear would be safe.

By emphasizing the three pipelines' proximity to water sources the frequency of spills throughout the country and our overall dependency on oil Greenpeace discredited that idea and created a powerful tool for social action.

Last year the rallying cry at Standing Rock was "Water is life." Activists argued that if a pipeline ruptured and spilled oil which has happened almost 9 000 times in the past three decades their drinking water would be contaminated.

In their map Greenpeace stresses the pervasiveness of that threat by showing that pipelines are located near — and have spilled into — the major lakes rivers and gulfs across the country.

In fact the largest spill depicted on the map lasted for 17 hours and dumped one million gallons of crude oil into the Kalamazoo River.

To make matters worse tar sands oil unlike crude oil sinks in water making it even more difficult to clean up the spill which traveled as far as 40 miles downriver.

The risk is constant

What's also striking about Greenpeace's map is the sheer number of dots. Since 2010 the three companies have been responsible for 373 spills totaling 63 221 barrels of hazardous oil.

And in the past decade according to Greenpeace U.S. pipeline spills have led to:

In that regard the catastrophic headline oil spills are the worst of the bunch but they're hardly unique. This map helps communicate that nearly every part of the country is at risk for future spills.

Because oil is relatively cheap and so easily available it's easy to forget the infrastructure required to extract refine transport and sell it.

By also plotting the existing pipelines on the map in grey Greenpeace reminds viewers of how heavily we depend on the commodity especially in the Midwest and South where dozens of pipelines crisscross the states.

To make sure these new pipelines are never constructed Greenpeace is asking the public to pressure JPMorgan Chase the bank providing their financing. With clear powerful maps like this one they make a strong case.