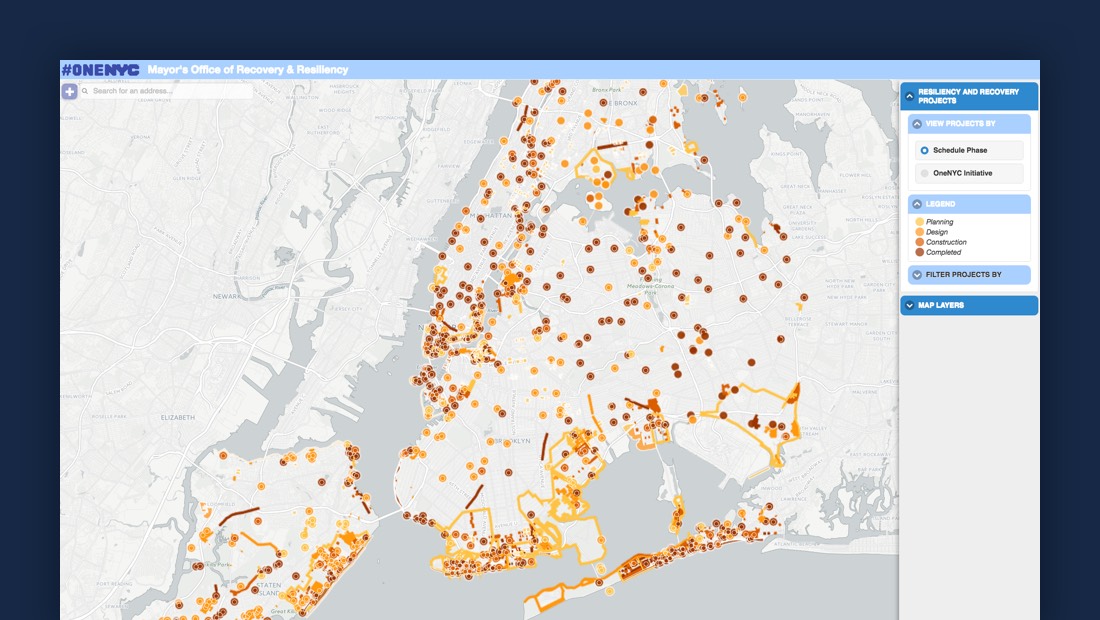 On the heels of Climate Week NYC 2016 we at CARTO would like to share with you a recent project from the Mayor's Office of [Recovery and Resiliency (ORR)] in support of their efforts to confront the anticipated impact of climate change on New York City over the next 100 years.

With CARTO's location intelligence platform ORR is charting a course to prevent history from repeating itself in the form of another Hurricane Sandy-type superstorm.

Hurricane Sandy the worst natural disaster ever to strike New York City began battering the city on October 29 2012 and in a span of nearly two days charted a path of destruction that led to the deaths of 44 people infrastructural damage to the city's transit system and related property damages totaling more than 19 billion dollars. Sandy's devastation was facilitated by an alignment of idiosyncratic factors--such as its entry into New York's low-lying coastal regions during high-tide in New York Harbor--but it nevertheless forecasted future risks posed to the city by climate change.

In 2013 the New York City Panel on Climate Change (NPCC) an independent body of scientists advising ORR's risk and resiliency initiatives identified among potential future risks heat waves torrential downpours and rising sea levels that would irrevocably change the city's topography. NPCC predicts a 30 inch rise in sea levels by 2050 which means that twice as many New York City residents (nearly 800 000) will reside in "100-year floodplain."

In collaboration with the Department of Information Technology and Telecommunications (DoITT) ORR's OneNYC campaign relied upon CARTO's platform to create an interactive map whose polygon layers visualize anticipated changes facing New York City. Leveraging various data sets within one data visualization allowed OneNYC not only to pinpoint which areas will be impacted the most in the coming years but also current measures being taken to avoid a repeat of Sandy-level destruction.

Mayor Bill de Blasio heeding NPCC's dire warnings has pledged 20 billion dollars to fund OneNYC's recovery and resiliency campaign as it inaugurates structural transformations across the city. CARTO also developed an exploratory dashboard to help visibly promote these diffuse projects. One of the greatest impediments in rousing a public sense of urgency around climate change has been confronting a "seeing is believing" logic wherein actions are taken only when a threat such as Hurricane Sandy is both visible and thus unavoidable. OneNYC has devised a new strategy to bypass this problem with CARTO's location intelligence platform as users can search their own addresses to view their neighborhood's risk of potential flooding as well as the types of projects scheduled to prevent another natural disaster.

Learn how CARTO can help make your city more resilient.