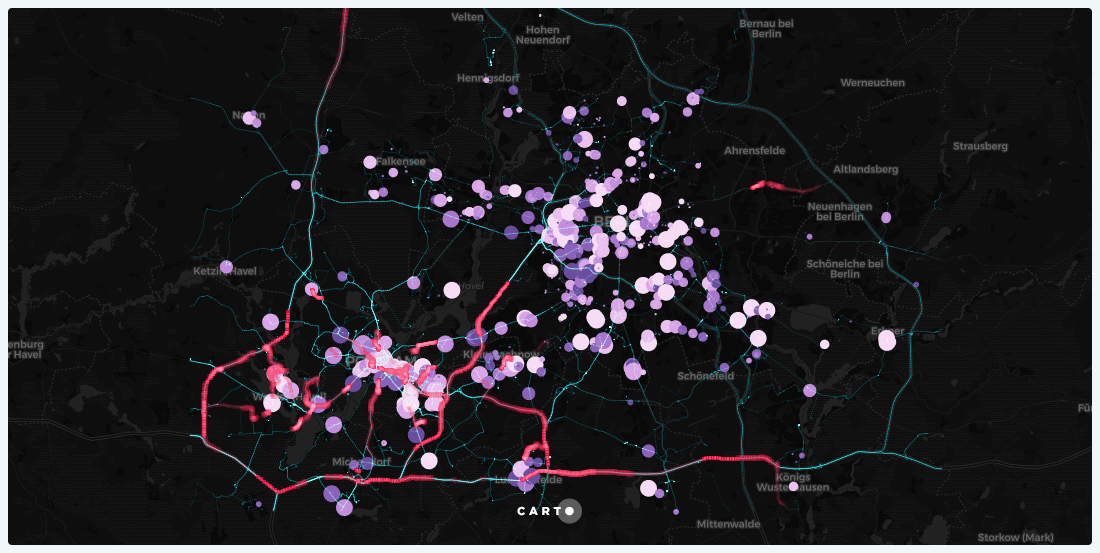 Location Intelligence (LI) is not so quietly becoming a core part of most enterprise business’ strategies. In a survey of 220 data analysts executives and scientists 85% believed that location intelligence would be “very" or “extremely" important to their organization’s success over the next 3 years with 84% planning on investing in LI technology.

GIS set the foundation for businesses to begin collecting and visualizing geographic information. In The State of Location Intelligence of 2018 survey 94% of c-level executives said their companies collect and/or store some kind of location data. But in order to stay competitive business executives know they need to focus on the intelligence from their location data not just on the geographic information itself.

Location intelligence is the natural evolution of geographic information systems.

There are three main factors driving this shift from GIS technologies to location intelligence:

New data streams. Location intelligence incorporates open data real-time data streams and big datasets from all of kinds of internet-connected systems devices and sensors many from sources external to the business. GIS has relied primarily on proprietary geographic datasets owned by the business. For example with LI:

New classes of users. Location intelligence is immediately accessible to developers data analysts and data scientists looking to incorporate location data directly into their workflows and into core business decision making. GIS is largely limited to specialists with extensive training and certification often through accredited academic institutions. Their interaction with core business processes is usually intermediated through reports that then need further interpretation to be of use to decision makers. For example with LI:

Organizations can no longer rely exclusively on their own data. With the increase of easily accessible data streams from external sources like open data portals IoT (Internet of Things) devices and other data providers companies can create easily deployable dashboards and apps that help predict and optimize business outcomes.

The biggest players in GIS have taken a proprietary approach to designing software which gives the software provider total control on how customers use and interact with the data within the closed system.

Dependence on a closed database for customer’s location data significantly limits the ability of organizations to import data from external sources (or at the very least import without risking data distortion). As a result GIS users are often limited to working with datasets provided or approved by their software vendor.

Location intelligence embraces open source and relies on companies using a wider variety of dynamic data streams for their visualization and analysis rather than exclusively static information from a specific point in time.

An example of new data streams in action

The visualization below shows a projected hurricane track off the coast of Florida layered on top of insurance policyholder data. The map which can be updated with publicly-available NOAA data in real-time during a real hurricane event shows which policyholders are at risk of hurricane damage and the amount of estimated damage.

Tracking a storm or event and its impact on policyholders in real-time can help insurers understand where they should deploy personnel on the ground to assess damages and what areas might require the most rapid response for claims. Insurers could also proactively communicate preparedness tips and evacuation information.

For more inspiration check out our list of 40 brilliant projects built with open data.

Location intelligence and the need to use location data to address a wide variety of business use cases has led data scientists to develop new methods of spatial analysis that are being adopted by business users across nearly every industry.

This emerging field called Spatial Data Science (or Geospatial Data Science depending on who you ask) will be pivotal to organization’s success as more and more business executives and analysts start asking questions that require predictive solutions with location data.

While GIS’ strength lies in reporting historic location data (eg. How much rainfall was there in Clark County in March 2014?) location intelligence lets companies answer questions about what should happen and optimize their business strategy accordingly:

Each of these questions requires a new type of data analysis designed for location data like spatial clustering optimized routing or Moran’s I (a method of determining spatial outliers).

An example of new methods of analysis in action

To show how location intelligence can impact supply chain network design we analyzed the distribution network for Publix a leading grocery store chain in the southeastern United States.

To understand their current design we:

The resulting distribution network shows total miles driven # of routes and number of hours spent driving. An operations manager could use this approach to further optimize their supply chain or answer additional questions like “Where should I play our next distribution center?"

GIS pioneered analysis methods for analyzing and visualizing geographic information answering questions about things like topography and historic weather patterns. Location intelligence is pioneering the next wave of spatial analysis with methods and techniques that focus on solving business problems.

GIS gradually emerged as its own industry in the 20th century largely because the technology required extensive training to use often from a university. As a result companies looking to analyze location data were limited to a small pool of GIS experts who could use the software.

With the rise of location data that impacts almost every business and department it is no longer sustainable to rely on software that requires an advanced degree to understand and operate.

The next 5 million GIS users will not know what GIS currently means to us today. The next wave of spatial professionals are going to be developers data analysts and data scientists--not GIS experts with highly specialized training.
- Javier de la Torre CARTO's Founder and CEO in a recent interview.

As a community we know that in order to solve the toughest challenges businesses face we must give developers analysts and data scientists open-source tools that they can integrate into the way they already do work rather than train them to use a legacy system.

The geospatial technology stack of the future is made up of companies like Mapbox CARTO and MapD who all release as much source-code as possible to speed up implementation time and promote innovation for the industry as a whole.

The State of Location Intelligence in 2018

With 78% of c-level and managers planning on investing in location intelligence in 2018 the reign of legacy GIS systems is quickly coming to an end.

New methods of analysis and new streams of data are allowing a whole new class of users from data scientists to developers to unlock the intelligence of location data.

As a community we must embrace this shift and work together to create an environment where we democratize the access and analysis of data rather than placing the power within a small group of individuals who have been traditionally trained on legacy systems.

Will you help us out?

To learn more about The State of Location Intelligence in 2018 download our survey of over 200 data scientists analysts and executives. Read the Report