This week's map features the adventures of Varun Adibhatla on his quest to visualize the epic New York Century Bike Tour. A self-professed "ridestat geek " Varun was inspired to experience his second time on the tour in a whole new way during his first week of class at New York University's Center for Urban Science and Progress.

With the help of stalwart companion and fellow master's student Patrick Atwater Varun combined his knowledge of available data from a 2013 ride with his newfound interest in the science of cities to hit upon a curious new metric. The following map documents Varun's first display of "bumpiness" data. 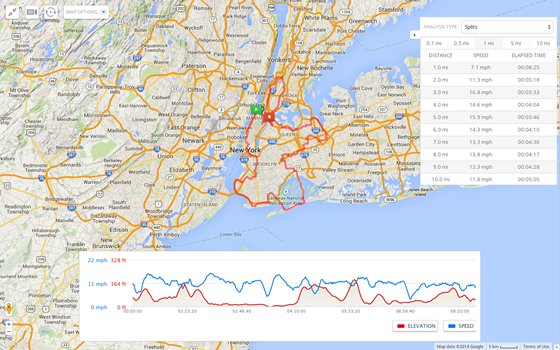 The New York Century Bike Tour from MapmyRide (Note: Varun collected 45 miles of Bumpiness Data before his phone fell off his bike).

Phase one of Varun's bumpiness exploration involved using SensorLog to collect data from his iPhone. Between rough patches of road and New York's notorious potholes acquiring location and accelerometer data was that much more of a challenge.

But tech prevailed and SensorLog provided data output in a no-nonsense csv file--perfect for CartoDB import. From here Varun began tweaking data from every half-second across the following fields:

Next came Varun's neat trick. To derive a clean measure of bumpiness he isolated the values from the motionUserAcceleration X Y and Z fields to calculate the magnitude of acceleration across the x y and z directions. The result? A single number that conveyed bumpiness. 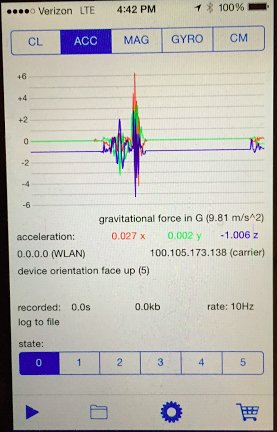 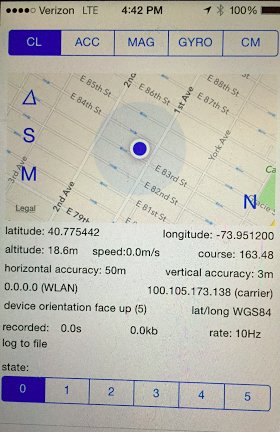 Timestamp + coordinates + bumpiness = three for three. Varun used Excel to rank these values and processed over 92 000 ranks wherein the smallest rank conveyed the most bumpiness. He then split this data into four categories to evaluate rider experience:

CartoDB is loving "Bumpiness in NYC". Our Category Torque tool was tailor-made for Varun's project. The animation requires time series data which Varun plugged into the above categories to convey bumpiness and voila! This visualization was born:

Varun settled on a Stamen base-map to evoke "Sin City" and make the neon colors "pop."

Extra kudos to Varun for getting "Bumpiness in NYC" recognized at NYU'S Data Service GIS Day. And huzzah for student mappers!