This past week the NYTimes posted an extended piece on mapping county-level lynching data a topic of interest to some of our academic users and in particularly Michael Weaver. Michael is a Ph.D candidate in Political Science at Yale University where he investigates the causes and consequences of ethnic violence.

His dissertation is on how the changing nature of publicity helped turn Americans against lynching and this week his Torque map is our Map of the Week. Read on to learn about his research in his own words.

On April 23 1899 Sam Hose a young black man was lynched by a crowd of hundreds in Newnan Georgia. Several days earlier Hose was accused of murdering his employer and raping his employer's wife. When he was captured a large crowd gathered and special trains were chartered to bring him and to the county jail. Despite the pleas of former Georgia governor William Atkinson to respect the rule of law the mob dragged Hose to the outskirts of town tortured and burned him to death before more than a thousand onlookers.

This event was not unique; dozens of so-called 'spectacle' lynchings in which the victim was tortured and killed before a large crowed occurred. More broadly historians estimate that well over 4 000 people died at the hands of lynch mobs between 1880 and the 1930s the vast majority of whom were African American.

This map produced by the Tuskegee Institute shows an earlier attempt to map lynchings by county from 1900 to 1931: 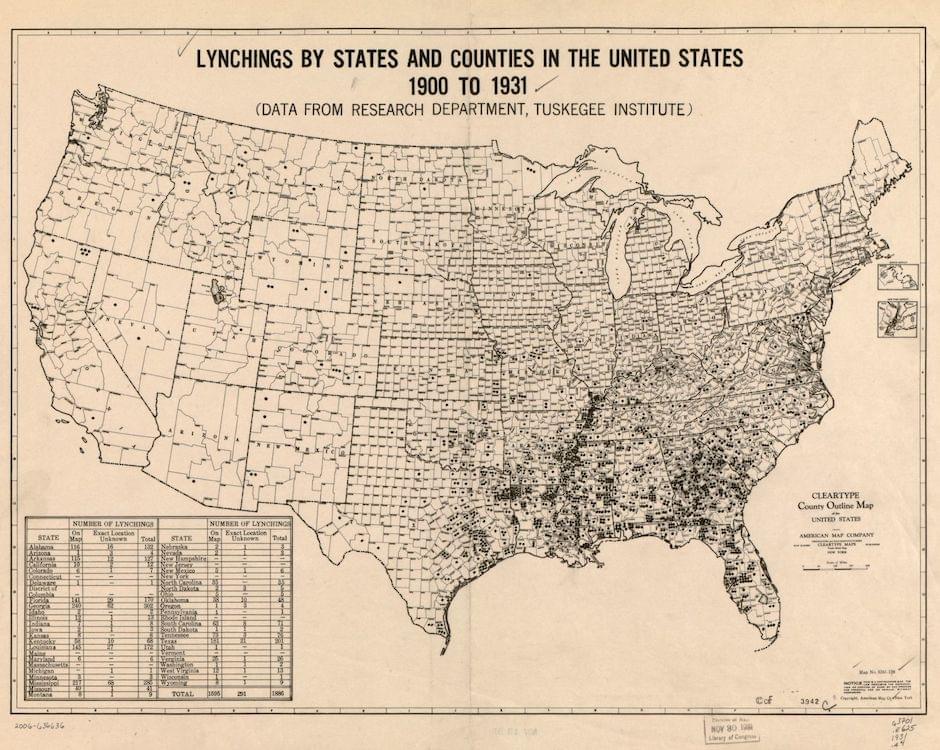 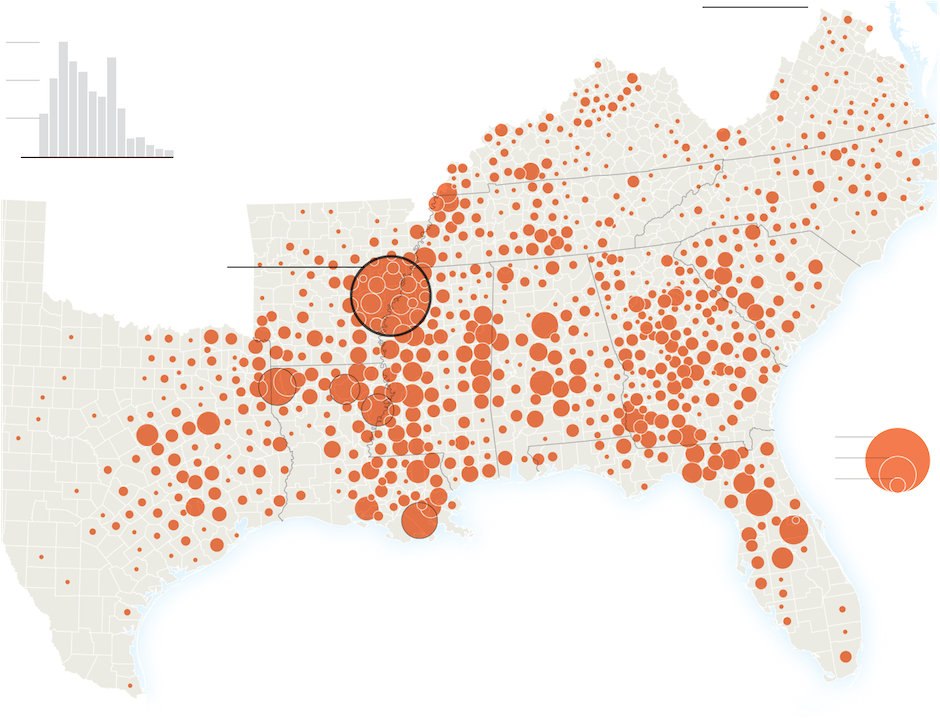 I like many today had associated lynching with ugly racist violence done in secret. In fact lynchings were often committed the open sometimes widely attended commemorated in postcards and songs and reported in local and national press. Press accounts often justified or defended lynching. Almost always lynchings were recounted using archetypal narratives that cast black victims as both guilty of some crime and subhuman. Because newswire services depended on local journalists for stories these local justifications for lynching were disseminated across the country and appeared in even urban Northern papers like The New York Times. Across the country the public sphere was filled with arguments and narratives that justified lynching as expressions of popular sovereignty an acceptable alternative to corrupt and inefficient courts and a necessary deterrent to 'black criminality'.

Front page of the The Macon Telegraph from April 24 1899. 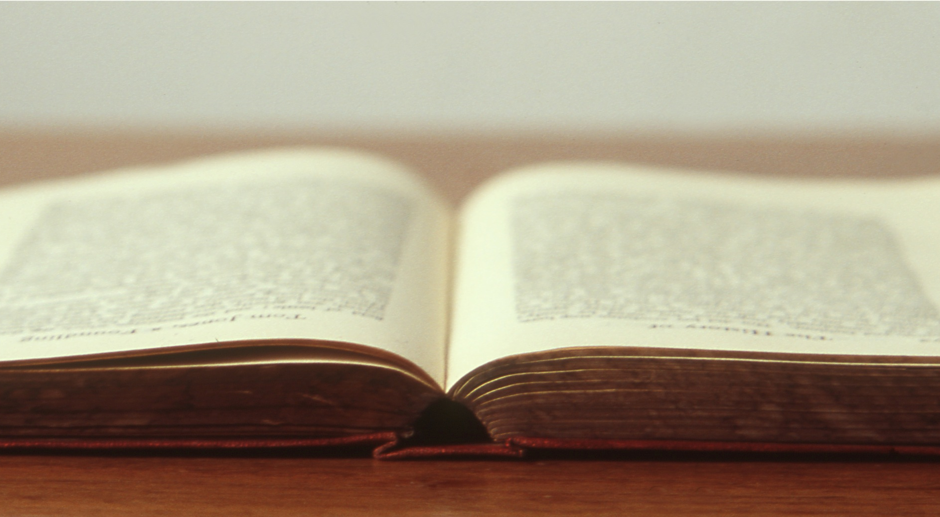 Between 1890 and 1930 a there was a sea-change in public opinion about lynching. While local support for lynching may have persisted in many places across the South the national public debate turned decisively against lynching. The previously unimpeachable reputation of the mob came into question. Newspapers reported that the crimes of the lynch mobs equaled if not exceeded the alleged crimes of the victims. Victims of lynching were no longer excessively dehumanized and presumed guilty. In time the vigilante acts came to be seen as scandalous breaches of law and civilization and drew national and international outrage and scrutiny.

Two things struck me about this history: on one hand I was horrified to see how lynchings had been lauded or defended. On the other I was left asking: How did this moral revolution against lynching take place? In my dissertation I attempt to understand how public debate turned against lynching. To answer this question I need to know where when and how the press was talking about lynching. This blogpost is about mapping the where and when.

Today public debates embedded in newspaper articles blog posts and tweets all originate in a digital format making them relatively easy to find and use example. I wanted to capture the dynamics of a public debate that started more than a hundred years ago and was recorded on paper.

Luckily several different archives are engaged in large-scale scanning and digitization of historical newspapers. Proquest Readex NewspaperArchive Newspapers.com and Chronicling America. While the purposes of these archives aim at different audiences from the general public to academics to family history buffs they all provide functions to search the newspaper text. Each of these archives contains issues from dozens to hundreds of newspapers. 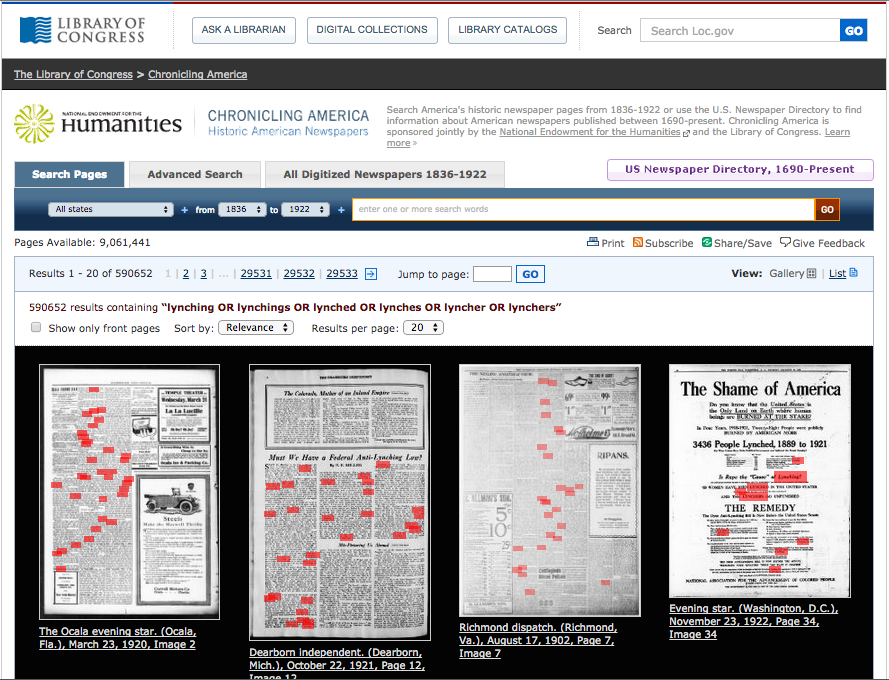 An example of search results from Chronicling America

In total these archive contain well over 2 000 newspapers between 1880 and 1940 ranging from big-city dailies to small rural weeklies. To search these newspapers I wrote Python scripts to submit search queries and collect the metadata for matching articles. I made extensive use of the requests module to access sites that required logging in and BeautifulSoup module to extract data from the page html.

You can check out the code for scraping Chronicling America here.

While each site provided slightly different metadata on each search result I was able to extract the:

Because I was scraping this data myself I cleaned the location and date data as I went. Finally once the data were collected I geocoded the newspapers. To speed this up I identified unique city-state pairs and used GEOLocate and the Google Geocoding API to geocode these unique locations.

The data presented here show newspapers that make explicit references to lynching: lynching/s lynched lynches and lyncher/s. While I could have included other terms used to describe lynching or "lynch" by itself these terms would mostly likely have capture too many false positives. For instance searches for "lynch" often yield hits for the last name or Lynchburg Virginia.

This search for explicit mentions of lynching yielded approximately 1.2 million articles. With this data I could start to see where and when the press addressed lynching as an issue.

Given the spatial and temporal dimension to the data creating a Torque visualization was a natural choice.

I made a few aesthetic choices to make it easier to see patterns in the data.

What can we learn

A few things are immediately apparent when looking at the map.

This is a project still in its infancy. Obvious next steps include mapping where newspapers did not publish about lynching as well as the sites of lynchings and attempted lynchings. As I am able to collect more data using my search scripts I will be able to use layers and color schemes to visualize whether articles took on a pro- or anti-lynching position and possibly match articles to particular lynching events.

It is high time we had an answer to this question: why did lynching a widespread and accepted practice of local "justice" suddenly become a national scandal and eventually come to represent one of the darkest chapters in the story of race relations in America? I hope that bringing "big data" into the past will help answer riddles about lynching and race violence that have never been properly addressed.

Thank you Michael and thanks for reading! You can learn more about Torque in our CartoDB docs and tutorials in the Torque sandbox and on Github. Feel free to message Aurelia if you have any questions about this post or want to get in touch with Michael!