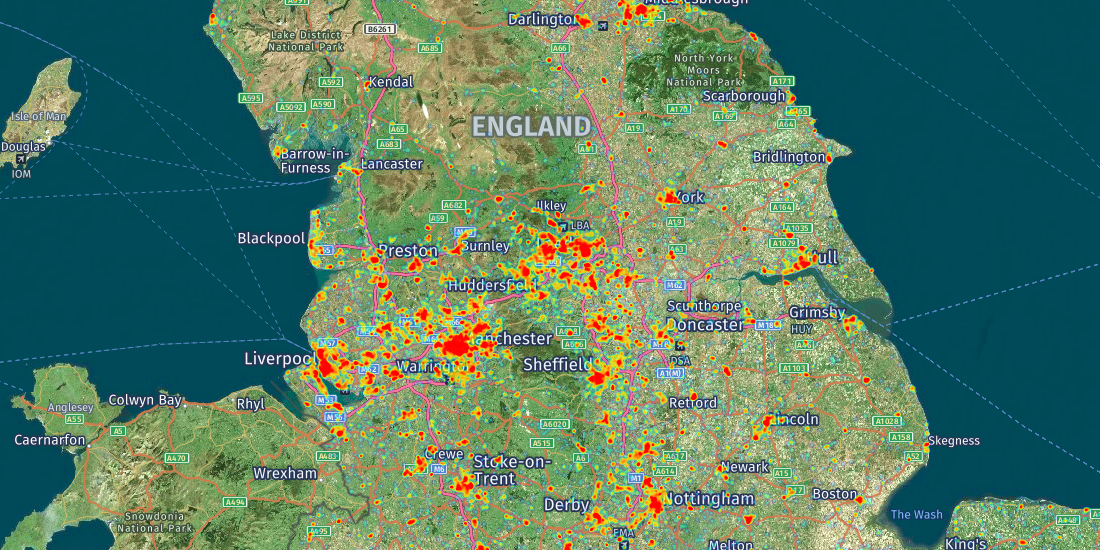 For August’s Map of the Month we are happy to feature Housing and Spatial Information Specialist Dan Cookson’s recent map of the 1.5 million new homes built in England over the last decade.

In our 2018 Twitter Guide we highlighted Dan for his beautiful and incisive maps and this one is no exception. This visualization represents the decade of development from 2007 to 2017 in time series highlighting hotspots of new construction. For deeper insight the map includes the ability to toggle layers representing administrative boundaries clusters and the UK’s unique Green Belt zones. These areas ringing cities are designed to resist urbanization and sprawl by being designated as open often public spaces.

Visualization and Analysis of public data as demonstrated by Dan's map can be a useful tool for planners and policy makers looking for deeper insights on societal change and the impact of policy decisions.

Want to learn more about navigating a changing real estate landscape? Check out our recent webinar!

In conjunction with the Map of the Month feature we took the opportunity to ask Dan a bit more about his work motivations for visualizing this data the challenges he has faced working with open data and more! Check out the Q&A below.

Your map of new houses in England over the past decade has gotten a lot of attention! What motivated you to actually create this visualization?

The motivation was actually born from a frustration that as far as I could tell no-one had properly identified where all the new homes built in England over the last decade had actually been built. Given that there have been 1.5 million of them it did seem like a bit of a gap in the ongoing debate about housing in UK.

As an independent housing market analyst I work with a great deal of address based information on housing sales - and in England that raw data is freely and openly available from Land Registry. Each address includes a postcode which provides the basis for geocoding and mapping those house sales. However these private house sales do not represent the whole market for new homes as there are homes built for rental by social as well as private landlords.

Identifying where these 'not for private sale' new homes were built was the challenge.

I know that you built this map using the ONS Postcode Directory open data set. Were there any challenges or limitations that you ran into while working with this data?

Actually yes and no. Postcodes are great not least because new ones are usually created when new homes are built - and the date of a postcode's introduction is part of the public postcode file. Whilst the ONS Postcode Directory itself is open some of the key information that would have identified a postcode as being residential is missing from it. More specifically it is the data on residential delivery point counts that is only available in the postal address file (PAF) and this is an expensive dataset that needs to be licensed commercially from Royal Mail. If I'd had that information I could have filtered by that data.

After visualizing all of this data were you surprised by any discoveries that you or the folks that you shared it with made?

The biggest surprise was that this seemingly simple mapping exercise hadn't been done at the national level before. And certainly not shared interactively and freely.

However it was the local level feedback that was possibly the most interesting aspect of sharing the interactive map. The map enabled people to see what was happening in their local area over time. I was pleasantly surprised that sometimes the people giving feedback to the map on Twitter were local councillors with specific responsibility for housing. It goes to show that the processes of planning and communication can be enhanced by these web based maps.

This isn’t the first map you have made using CARTO what do you see as the benefit of mapping the interesting data that you come across using the CARTO platform?

Indeed not. I've been mapping stuff for over 20 years using both desktop and Web based systems but since discovering CARTO five years ago it's fair to say I've become rather hooked on CARTO. I love its unique combination of power and ease of use both as an author/editor of maps but also for end users. I'm delighted by the ability it gives to share complex and sometimes quite large spatial datasets in new ways that ultimately lead to better insights/understanding for end users. I particularly value the variety of ways CARTO lets me visualise/share spatial data - and am excited by the latest vector approaches which enable some of the really cool interactive heatmap animations. Getting non map geeks to engage and explore data is a reality with CARTO!

Other than providing a stunning and insightful visual how do you think governments the real estate industry or otherwise interested individuals can benefit from both your map and from a deeper dive into the open data that you used and other similar datasets?

A very good question and one I spend a lot of time pondering. In essence I think there could be huge benefits across the full breadth of housing/economy/society (Gov Developers Planners Citizens) and we are slowly seeing more examples of these type of open data information interfaces that help all sorts of people make sense of place.

What I would say is that thanks to #opendata and systems like CARTO it is possible for small experienced teams to stand on the shoulders of others and build creative interfaces to information that can add real value. Ultimately I hope these data visualisations provide some inspiration for others to do similar help inform users as to the possible and to raise the expectation levels when it comes to planning at all scales.