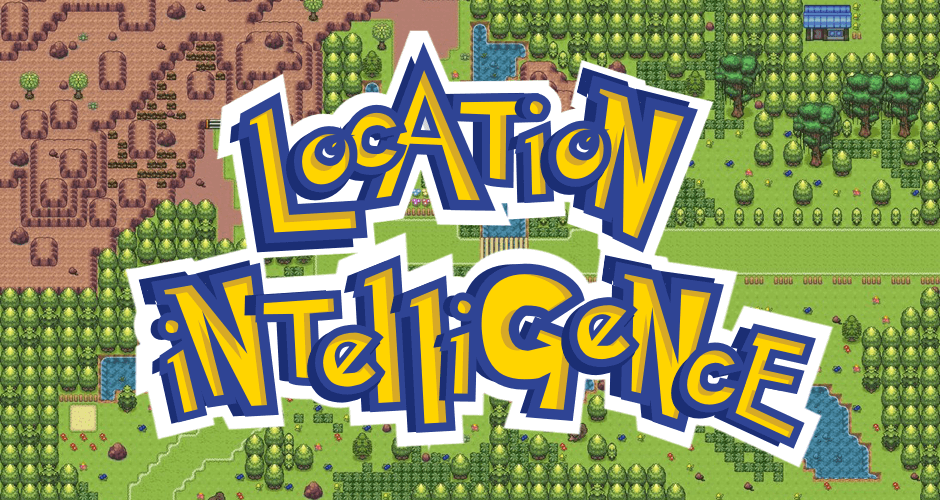 Pokémon GO is Apple's most downloaded app in a first week ever and reached an estimated 100M Android downloads from the Google Play Store as of three days ago.

In this game where users try to “catch" different Pokémon types by walking around their local neighborhoods—or by traveling to the locations that host specific species—the Points of Interest (POIs) are distributed around the world based on user-created location data previously generated by the players of a game called Ingress an earlier real-world exploration game built by Niantic Inc. the software company behind Pokémon GO.

Since I first heard about the app and the game’s dynamics I’ve been following its astronomical rise in popularity and thinking about how such a cultural phenomenon could be leveraged together with location intelligence (LI) to make better decisions. With a few simple analyses I've found that quite a bit can be done—and the good news is that all of these improvements are applicable to many other use cases.

But first returning to Pokémon:

What does LI have to do with helping me find a Pikachu?

The cartoon creatures that surface in Pokémon GO like living beings thrive in the habitats that correspond to their attributes and behaviors. Pikachu a rodent Pokémon flourishes in forests and woodlands; Squirtle which resembles a light blue turtle pops up near docks canals or harbors. Identifying the physical features of a location where these creatures reside is a task particularly well-suited to an LI platform. Finding green area hotspots or detecting the dock that's closest to a particular location are simple analyses that can be completed in minutes.

How can LI be used to automate the release of many Pikachus?

A simple SQL query would let you place Pikachus directly in a polygon defined by the boundaries of a forest—without the need to rely on user-generated location data.

Distributions of various Pokémon could also be improved using third-party data sources like the CARTO Data Observatory: more Pokémon could be positioned where the population is younger to attract physically ambitious gamers; in high-commuter regions to heighten player interaction; and most important in less affluent areas to allow people in lower-income or majority-minority communities to participate meaningfully in the game.

Pokémon GO could generate loads of business oportunities with the insights provided through LI. 100 000 000 downloads represents A LOT of people.

It’s enough digital footprint data to drive some major decisions and advertisers have the added benefit of knowing that most who have chosen to download Pokémon GO share a common characteristic: they are curious about video games among other things. But while access to this digital footprint data is not likely to become public anytime soon the Lure Modules which allow you to attract Pokémon to a PokéStop for a limited amount of time could easily be used to attract players to businesses.

Imagine that you know the closest path between a metro station and a POI that drives Pokémon GO user traffic. By identifying the PokéStops between your business and the closest metro stations and then purchasing some Lure Modules you could easily target your advertising to attract customers to your business. Lure Modules currently cost $1 every 30 minutes; an hour of hotspot for Pokémon GO users for $2 an hour? Doesn’t that sound like an investment worth trying?

In every major city in the world there is a segment of residents (and visitors!) playing Pokémon GO at any given moment. Active players move around these cities and end up meeting other players who share their interest in this game. As the density of Pokémon GO players is higher where there are PokéStops Pokémon or Gyms rearranging their distribution could help cities create new public spaces or even new communities. Lower-income areas for example could be "promoted" with the addition of Pokémon POIs—and identifying these communities can be done in a just a few minutes on CARTO.

The map above allows you to explore demographic values related to the distributions of Gyms PokéStops and Pokémon by census tract.

The Pokémon GO phenomenon clearly shows how key location is becoming to the industries driven by data analysis. The rapid adoption of mobile applications together with the fact that there is always a location component to mobile phones massively change the rules of the game. There's just no better way to analyze the social impact of Pokémon GO—or to understand how you can employ the app to advance your business interests—than through the use of an LI platform.

And location-based augmented reality games or pure location based applications are merely the tip of the iceberg. Making decisions based on a thorough understanding of location data is helping companies disrupt their markets and what is today's tool for disruption may be tomorrow's trump card.

Collecting all the data that comes embedded with any mobile app is just part of the story however—it's also fundamental to unpack this data by empowering the business units within companies to analyze predict and discover the insights behind the mapped visualizations of geolocations. And who knows? You might just come across a Dragonite in the process.