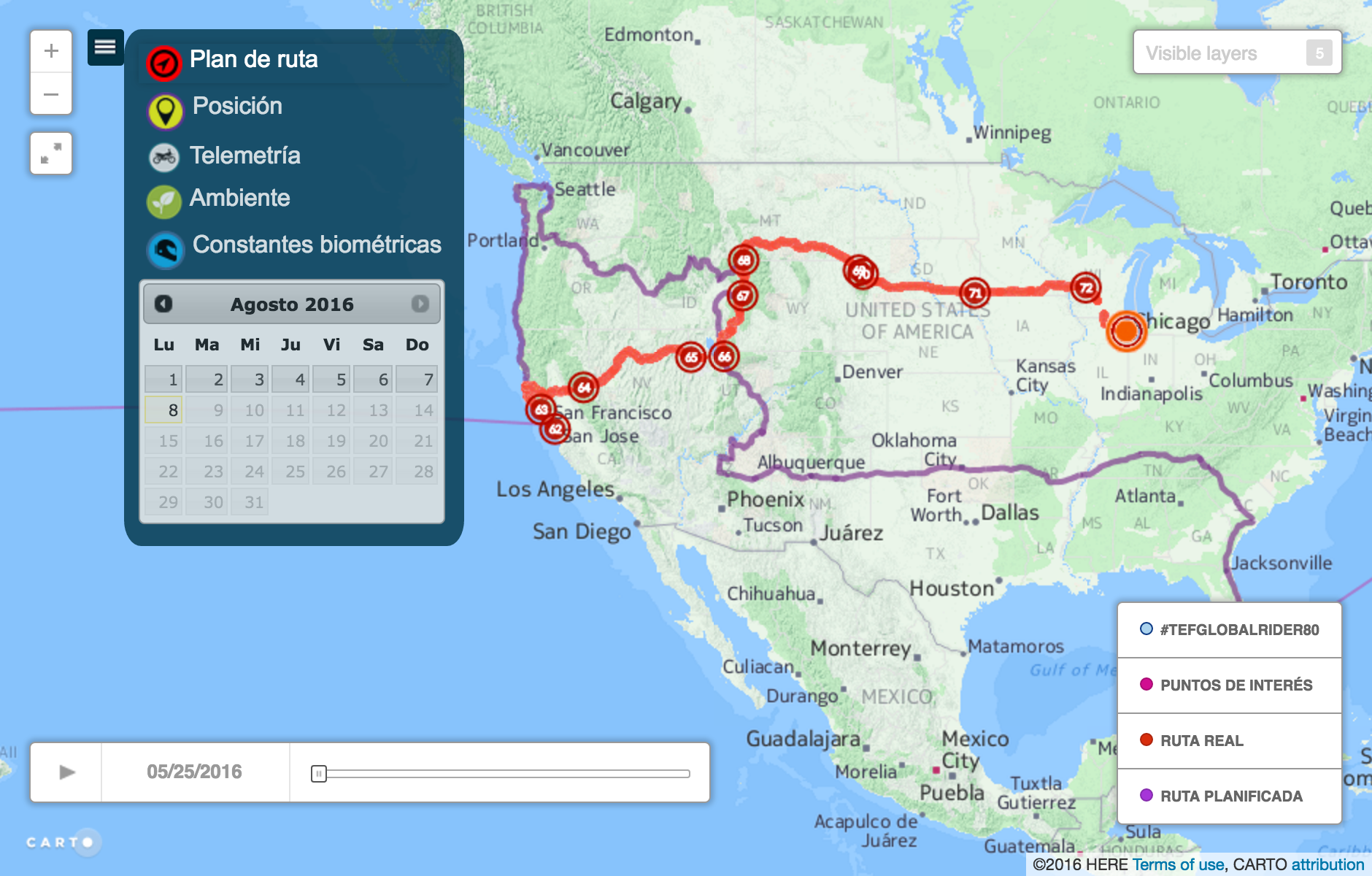 On May 27 2016 Telefónica and Yamaha kicked off Globalrider the world’s first ride-around-the-world fundraiser on a motorcycle where both the rider and bike remain fully connected along the 22 990-mile route of the eighty-day race.

Its chief architect and solo rider is Hugo Scagnetti a Telefónica employee whose bold promise was the catalyst of the collaborative endeavor that allowed him to begin his eastward journey from Madrid seventy-four days ago.

After an injury caused by avascular necrosis resulted in his inability to take steps without crutches Mr. Scagnetti vowed that if he could ever walk again without them he would circumvent the world to raise funds for stem cell research in tissue regeneration for young children—the population typically affected by avascular necrosis of the proximal femoral epiphysis and growth plate otherwise known as Legg-Calve-Perthes disease.

CARTO is honored to be a part of Mr. Scagnetti’s adventure for charity.

Harnessing the data compiled by the technology on his motorcycle CARTO has been providing public real-time tracking of Mr. Scagnetti’s location throughout the expedition. But in addition to giving visibility to his whereabouts we have also been mapping—literally—the real-time changes in Mr. Scagnetti’s heart rate braking and acceleration patterns speed and even surroundings via the visualizations of the alterations in the CO2 levels (ppm) of the continuously-changing environment he has so far ridden through.

With this project CARTO is lifting the static and variant data collected on a motorcycle travelling around the world and visualizing it against geolocation to give new meaning and context to the numbers this data represents.

To follow the remaining portion of Mr. Scagnetti’s trip or to explore historical data of its completed segments please visit the official page where you may also if you wish make a PayPal donation to the research team of the Hematology Division at Hospital Universitario Puerta de Hierro de Majadahonda and to the Traumatology Division of Hospital Universitario La Paz in Madrid the two beneficiary institutions of this fundraiser.

We wish Mr. Scagnetti the very best of luck on the final leg of his extraordinary journey and look forward to welcoming him home to Madrid.