A solar eclipse is headed to the US on August 21st. Find out the best places to watch it, and whether you're in the path of totality or not. 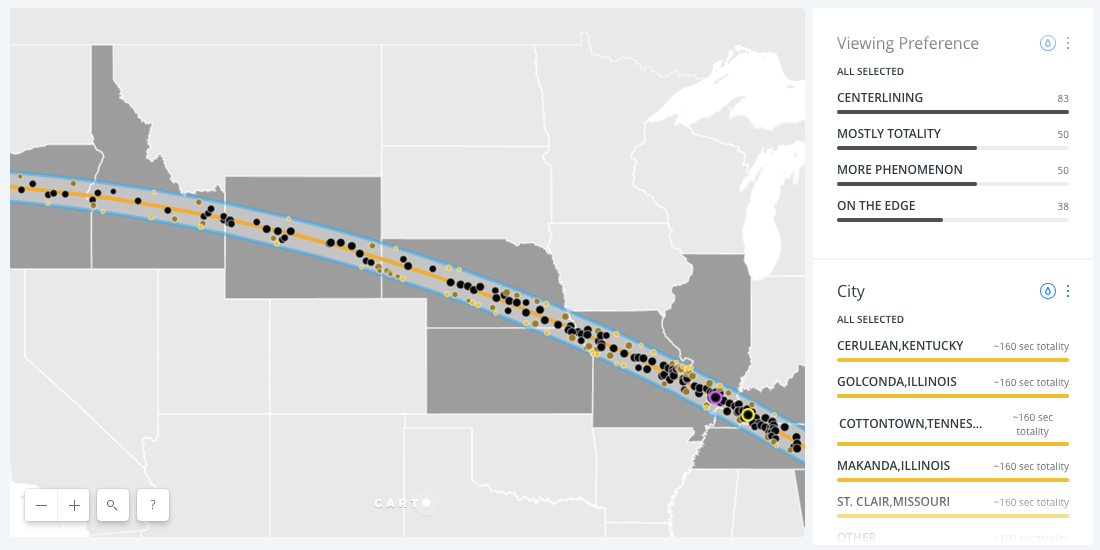 You may have heard a total eclipse of the sun is on the way to 12 states in the United States on August 21 spanning from the west coast of Oregon to the east coast of South Carolina. While we’ll be singing Bonnie Tyler from our desks in Brooklyn NY and trying not to accidentally go blind millions of people will be making their way to the path of totality to view one of the rarest and most sought after astronomical experiences: a total solar eclipse.

There have been some fantastic maps created showing different elements of the eclipse and there are a lot of different perspectives on what is the best place to view the eclipse. The truth is: it depends. It depends on how far you want to travel whether you want to see the longest eclipse or the most phases and a variety of other factors.

So for you procrastinors out there who didn’t book a cabin in the Great Smoky Mountains in 2015 and were thinking of hopping on a plane or driving to the path of totality our Senior Cartographer Mamata Akella created The Solar Eclipse Map to Rule All Social Eclipse Maps.

Our Solar Eclipse map shows a selection of cities that are inside of the shadow’s path. Each city is sized by its time in totality (larger circles indicate longer totality times) and colored based on its distance from the centerline of the eclipse path.

What you see during the eclipse depends on a number of factors including your location inside of the path as well as your distance from the centerline.

While your first inclination might be to get as close to the centerline as possible there are other eclipse phenomenon that will be visible further away from the centerline towards the edges of the approximately 70 mile wide path.

Needless to say if you are primarily interested in seeing the eclipse in totality you should stick to the cities that are closest to the centerline:

If you are looking to experience other eclipse phenomenon you should choose a city closer to the edge:

Already picked your state?If you know the state you are heading to you can filter the map even further. For example if your destination is a “Centerlining” city in Nebraska and you want to know when and where you can experience the eclipse with the greatest duration (from our selection of cities) you can filter your “Viewing Preference” to “Centerlining” and select Nebraska as your “State” of choice.When the information filters you can see which cities meet your criteria in the “City” widget.

In Nebraska if you are interested in the longest totality closest to the centerline you should head to either Falls City or Pawnee City. To make sure you are there in time click on each city or use the time-series slider to see the time totality starts!

If you are on the edgier side and want to see other eclipse phenomenon in addition to totality you can filter the map to display the cities “On the Edge” of the path (see below). Once filtered our map shows that Hebron Lincoln and Mullen are three options along the edges of the path where you will be able to experience totality for a little over 2 minutes and given their location you will likely see other eclipse phenomenon as well.

As a bonus we also created a map for eclipse viewers that aren't interested in sitting in gridlock traffic and aren't set on a full path of totality viewing. In that case this map shows the % obscuration for major cities across the United States and you can click on your city to see what time to stare at the sun (with your compliant eclipse-viewing sunglasses).

Whatever you do whether you're in the path of totality or not make sure you use compliant eclipse-viewing glasses. Good luck and happy eclipsing!