A spatial interaction model is specifically used to map and model the interactivity between various factors in distinct locations. This makes it extremely useful to understanding any data you might have with more than one location component. 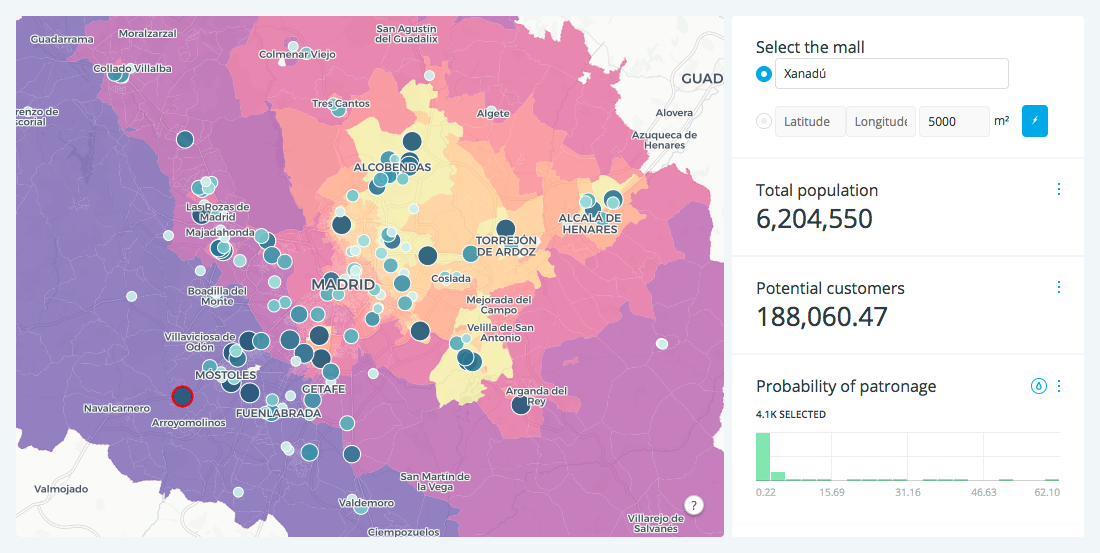 Much of the data gathered by businesses cities and other organizations today contains at least one location component. This is essentially the basis for the existence of the field of Location Intelligence. We believe that innovators in all sectors; private public education nonprofit etc should be empowered to draw insights and inform their decision making based on their location data.

Whether you are a corporate retail executive or a city planner you will need to draw on specific spatial techniques to plumb the depths of your data for answers to these questions. Enter the spatial interaction model.

So what is a spatial interaction model?

A spatial interaction model is specifically used to map and model the interactivity between various factors in distinct locations. This makes it extremely useful to understanding any data you might have with more than one location component.

This might be data reflecting the import and export of goods or migration patterns it could be commuter data or consumer data indicating where an individual comes from and the stores that they shop in.

You may also have heard this technique introduced as gravity modeling. While that may roll off the tongue a bit more there is a reason that we are using the slightly clunkier spatial interaction model moniker in our blog and it isn’t purely semantic.

The idea of a gravity model invokes Newton’s Universal Law of Gravitation explaining the force that objects exert on one another based on their respective mass (apologies to my physicist friends for my oversimplification). This force is defined by a very specific function of the mass of the objects and the distance between them. And while a gravity model may be appropriate as you analyze this type of “pull” within your data gravity modeling is only one type of spatial interaction modeling albeit the most common type.

Alternatively your data may have entities which instead “repel” against one another. So discussing spatial interaction modeling gives us the freedom to express the complexity and variation in the relationships present in our data.

Now keep in mind that this isn’t simply a tool for mapping datasets with multiple location components it is a model. Your goal in using a spatial interaction model doesn’t need to be limited to seeing and understanding the way that objects people or data have flown between two points. A spatial interaction model can help you to actively predict the flow between new locations as well.

In the below example the team at CARTO has built a model based around Huff’s law a retail model which looks at the probability of a customer making the choice to shop at a specific location based on existing alternatives. The aim is to help developers to predict the attractiveness of a new mall based on its location in Madrid.

The map takes the location of each mall in madrid and using factors such as size and distance as well as the location of alternatives (competing malls) to create a probability surface. This expresses the likelihood of households in a particular region to shop at a specific mall with the more purple regions having more likely customers.

In our example we can see the position of Xanadu and the total number of potential customers based on its location and distance to the competition. But since this is a model it allows us to create a new mall and understand how it may fare as well.

In the embed above click the radial button next to "Latitude" and "Longitude" in the widget on the right side of the screen. Click anywhere on the map to place a potential new site for a mall then press the blue lightning bolt icon. The spatial interaction model dynamically updates the data. You can drag the new point anywhere on the model and it will update after you press the blue lightning bolt again.

With a model such as this a commercial real estate developer can gain substantial insight into how attractive a particular new location can be. A retailer could use a similar spatial interaction model to understand whether a new location would cannibalize business from existing locations or where to place a new store to best engage their competition.

This kind of model isn’t only useful in the retail or commercial real estate. With applications from assessing the expansion of public transit and city planning to looking at the impact of conservation efforts on endangered animal populations across various regions the predictive and analytical power of a spatial interaction model is a powerful tool for anyone examining the relationships in their data.