Spain is the number one tourism country in the world. With sights like the Museo del Prado and Royal Palace of Madrid it is hard not to see how such spectacular beauty could ever be overlooked.

To assist in visualizing the majesty of this European gem Vizzuality and CartoDB are proud to announce our latest release: an interactive tool to analyze tourist spending in Spain during the summer of 2014. Using BBVA Data and Analytics you can see how tourists of different nationalities spent their time in Spain. Take a look at this UN-BBVA-LIEVABLE visualization and welcome guest blogger [Jamie Gibson from Vizzuality]! 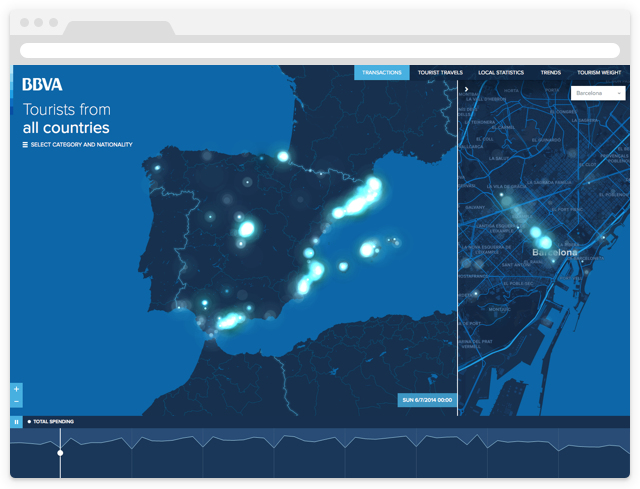 With anonymized data on 5.4 million credit card transactions we worked out how to visualize tourist spending effectively while optimizing the speed and performance of the application. Equipped with our unique blend of pioneering design principles and innovative coding we delivered "a piece of artwork" - almost fit for the Prado!

Vizzuality and CartoDB are committed to making data easy to look at and understand. The designers at Vizzuality paid close attention to crafting an interface that lends itself to clear presentation and powerful interrogation of the visualization. They also structured the visualization to break down big data into small digestible chunks through the four tabs providing multiple angles into the data and a host of opportunities to gain a deep understanding of all the facets of this dataset.

Over five million records is a rather large amount of data especially when you add a geospatial dimension. Instead of simplifying or splitting up the transactions to make them easy to process - we wanted the visualisation to be as accurate as possible - the whole dataset was loaded into CartoDB and queried when needed using CartoDB's SQL API. The CartoDB platform is great for handling large amounts of data and the high user load we expected.

To produce a cohesive visualization made up of multiple maps and timelines that run in unison Vizzuality modified and extended CartoDB's Torque.js library allowing the user to quickly jump back and forth in time and drill down to the transactions they want to see. To avoid having to worry about scaling and handling large volumes of users we chose to build an entirely static single-page application allowing us to focus on building a great experience instead of building infrastructure.

What do foreign tourists spend their money on in Spain? http://bbvatourism.vizzuality.com/

So what did people find out? El Pais the biggest newspaper in Spain pointed out that US and British tourists spend more on eating and drinking than anyone else Barcelona gets the largest amount of tourist spending and Madrid is the main base for Mexican and Venezuelan tourists. Meanwhile the variation in tourist spending in different places was picked up by El Diario Vasco and discussed by members of Meneame. 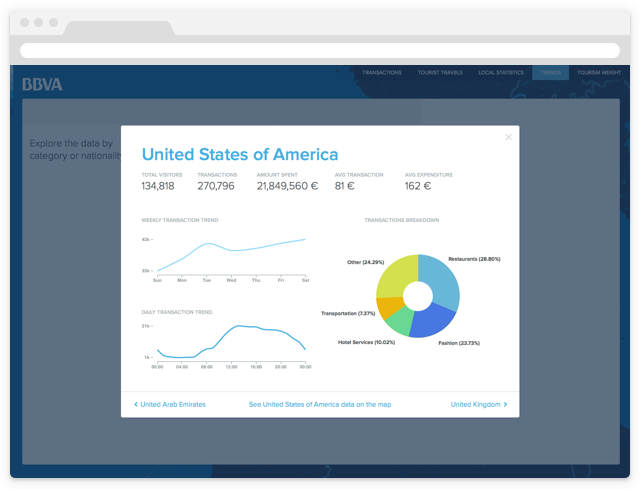 It’s been great to see so many people enjoying the application and we’re really proud of what we’ve achieved together with our friends at BBVA’s Centre for Innovation and Data and Analytics team. On to the next visualization!