This is a one hour training about the Postgres database and the PostGIS extension to allow to work with geospatial information. This is not an introduction, so if you are not familiar with SQL, Postgres and PostGIS, we recommend you start with these resources:

The main objective of this workshop is to showcase a few features from Postgres and Postgis that are not usually seen on typical GIS applications.

If you loved this workshop and want to learn more about Postgres/PostGIS, check out:

Rendering one to many relationships or clustering

In many occasions we need to display geometries that:

In both cases, we are displaying a geometry that has many records associated to it, while we still want to be able to see those individual records in our applications (e.g. in popups). 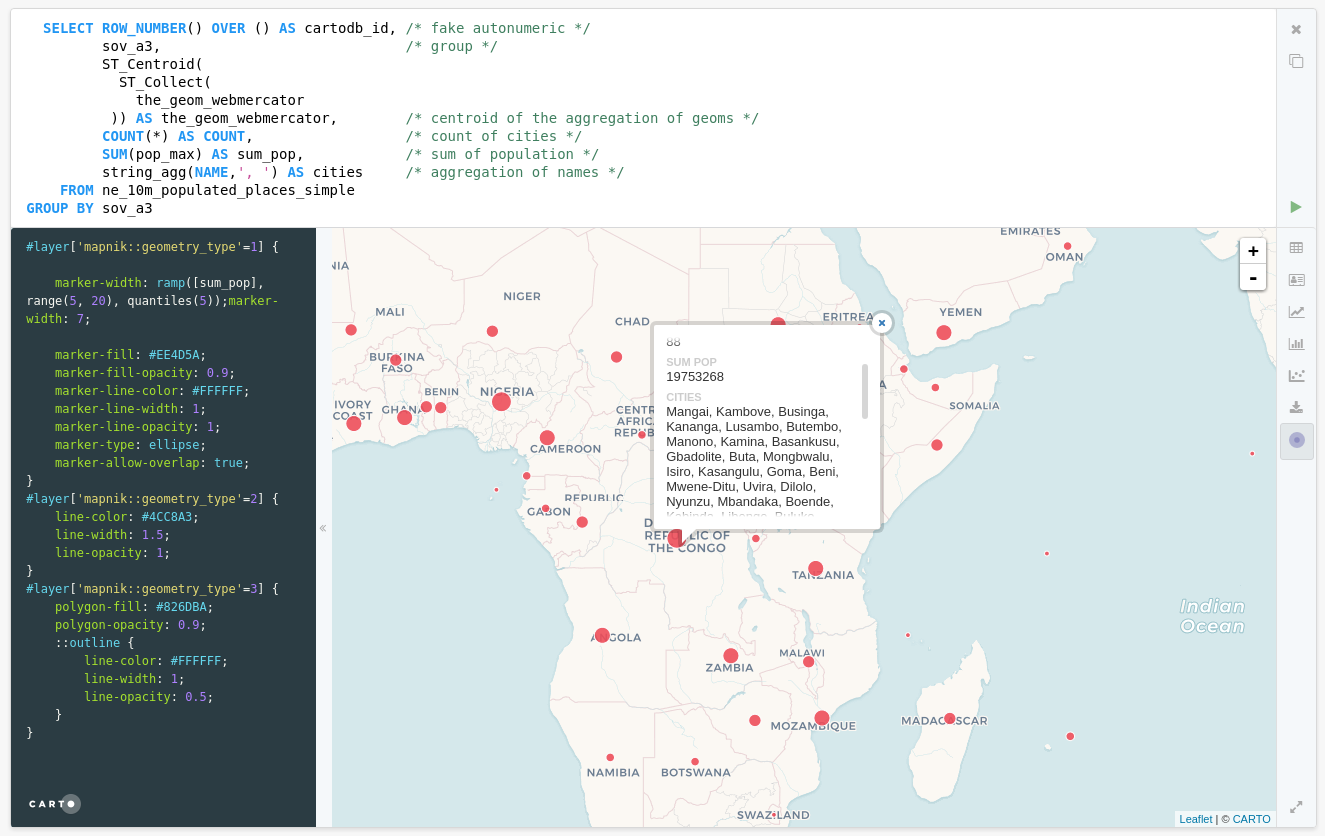 Concatenating strings can be enough, but sometimes our data can have more complex structures, or we want to have more fields. We can leverage the support in Postgres for JavaScript objects. This is also convenient for web development.

We are casting the JSON field to a string using ::text at the result of json_agg function. This allows displaying the result in Franchise, however in real applications your postgres client will convert it into text for you.

In modern SQL there’s a keyword to allow access the result of a query inside the next one, something like a for loop.

This is a very typical scenario, where you want to count points that fall inside polygons, while also taking other calculations. We use CROSS JOIN LATERAL to get access to every row of the main query (countries) and for each row access different metrics. 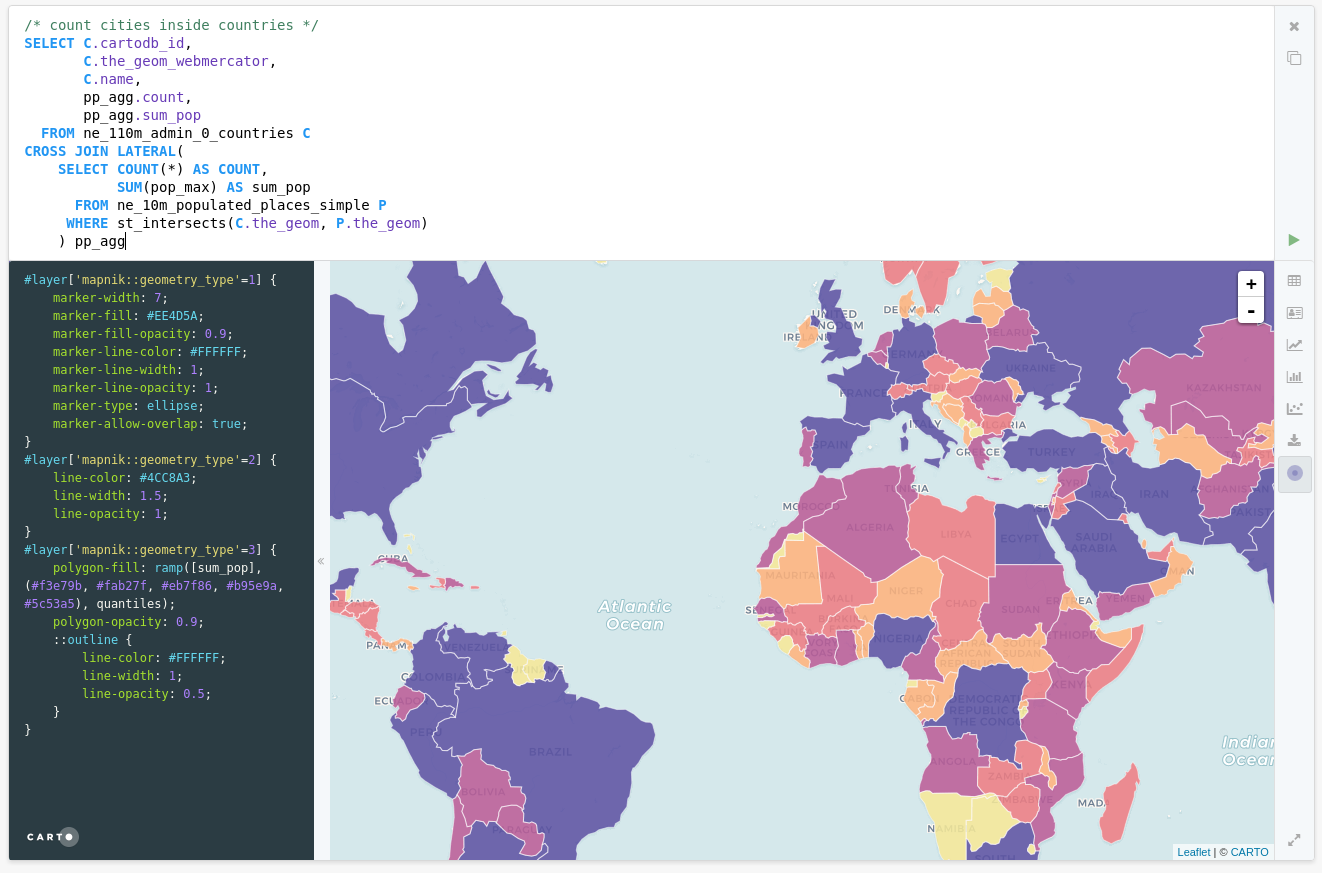 Checking points inside polygons can be very costly if those polygons have many vertices. If we try to count the number of points that are inside the a more detailed countries dataset called ne_10m_admin_0_countries it takes quite a lot and the query cannot be improved directly.

Franchise has a nice feature, if we prepend our query with a certain flavor of the EXPLAIN query, that is asking to Postgres to give details on the execution plan, it renders a nice graph of the cost of the different parts of our query.

This query then takes 21 seconds to execute, it’s using indexes and all the optimizations that Postgres can leverage from the data itself.

But for this question we can break our countries polygons into a different set of polygons that are simpler, but still all together cover the exactly same area.

This work was already did for you 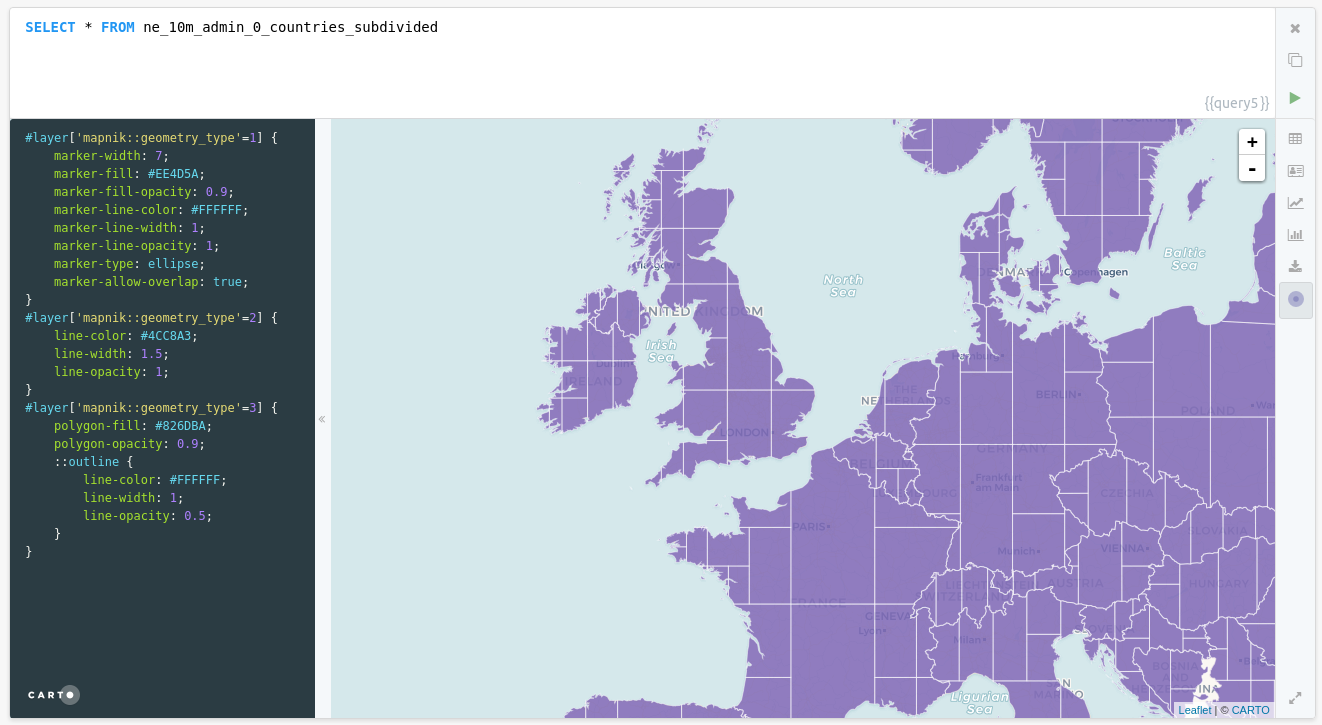 So now if you run the same query than before:

That took 167 ms which is more than two orders of magnitude better!

In traditional SQL, when making calculations you only had access to your row, you could not access your “neighbors”. With window functions, once you define an ordering and a partition criteria, you can access rows before and after the current one.

A typical use case for window functions is computing distance and speeds given a dataset of points that represent a moving device. We have a position, a field that represents the device and a time stamp.

So we can break our problem in two steps, first we will use the window function lead to get the next geometry and timestamp grouping our points by track_id and ordering by time. Once we have that information we can compute the speed as the division between the distance (computed over a sphere, good enough) and the time difference. 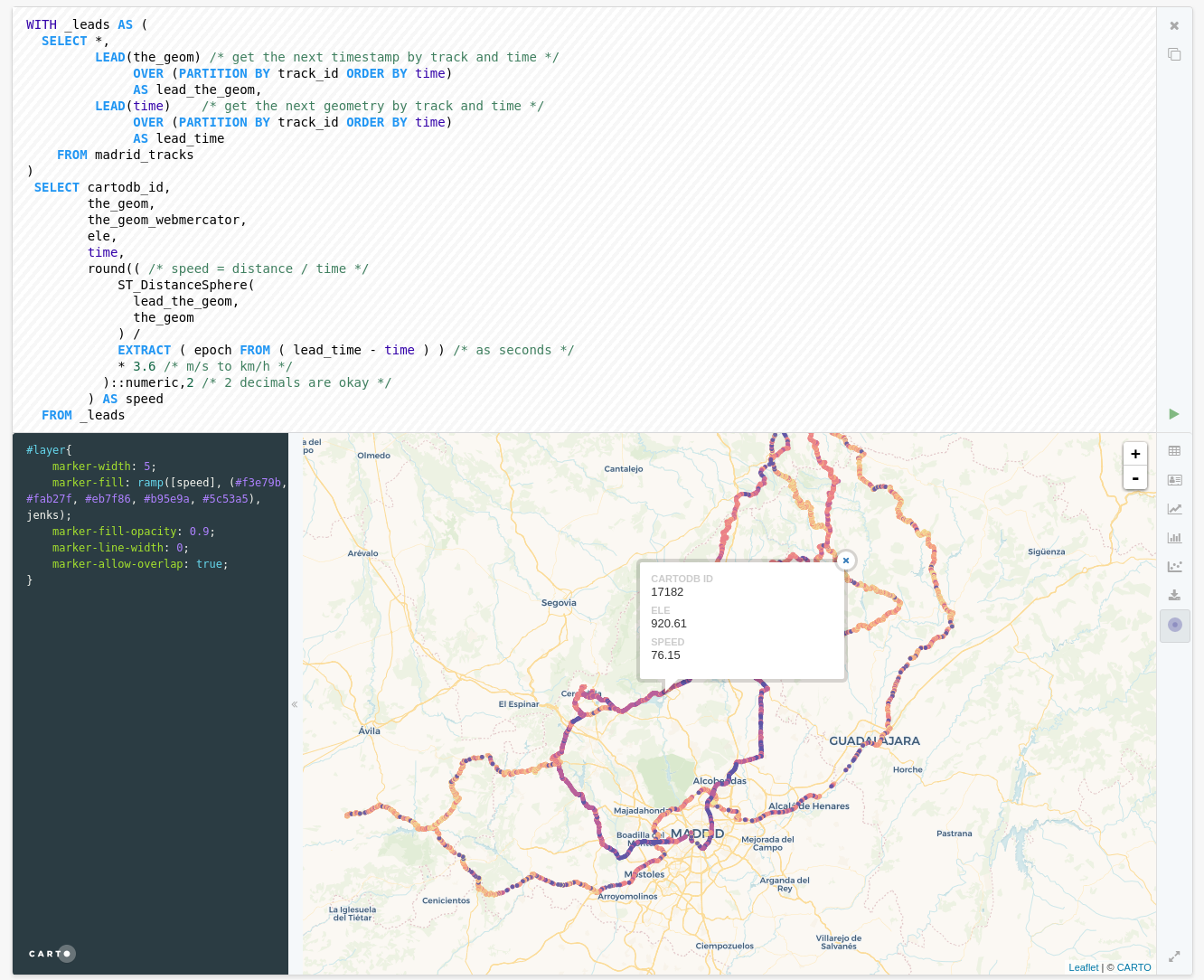 Franchise prints the graph of the execution plan, but there’s a better tool to do this task. Not long ago we received a support request asking for help on debugging the following query (reduced on purpose).

The query was scary, really complex, with several hierarchy levels, WITH, mathematical functions, groupings, etc. The EXPLAIN was incredibly long and complex. So we used the tool caled Postgres Explain Visualizer, available at http://tatiyants.com/pev.

On that website you copy your query and the execution plan in the same format Franchise asks for it and you get back a graph with way more detail on the different aspects of your query. We did that and we got this:

From that AGGREGATE box we detected that the big issue on that query was in fact a quite simple query:

The issue here is that FILTER is being executed thousands of times because of the GROUP BY. The solution was clear, execute first those filters and then join the results.

Making that change in the original query gave the following plan, which is actually more complex but executes way faster, from 5 seconds to 61 ms.