Manipulating your data with CARTO Editor

Learn how to manipulate your data with CARTO Editor.

How can I show only one country/area/region on a map?

If you would like to have a map featuring only one region or a given set of boundaries, you can define this with a custom SQL query. From the CARTO Editor, click SQL and apply the following statement: 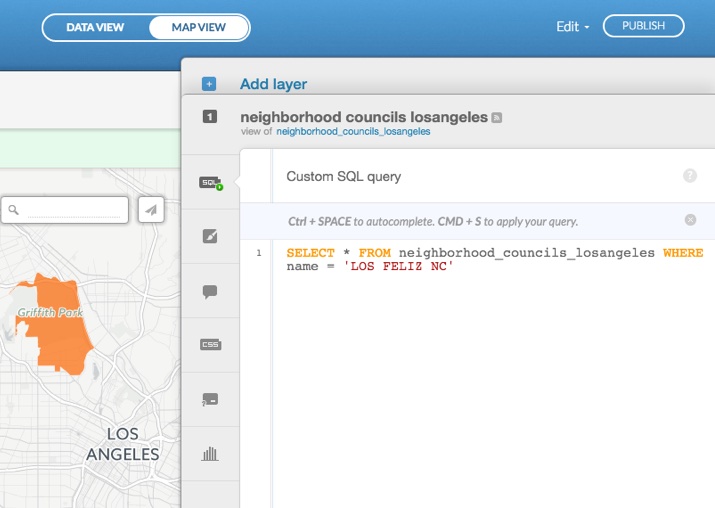 Create a new dataset from the query results and choose a solid color as your basemap. This ensures that only your selected area is displayed.

Tip: If you are comfortable working with the viz.json object, you can add custom code to your js file to set the zoom level and disable panning. For example, see Blocking panning with createVis. For more details about SQL and PostGIS in CARTO Queries to visualizations, see this introductory course.

How can I hide a subLayer of a Named Map?

By using the MAPS API, you can create Named Maps, which enable you to create shareable maps from private data. The map configurations are stored on the server and given a unique name. The source of your private data is protected, while allowing other users to view all of the visualizations of the Named Map without need an API key.

In order to hide a subLayer of a Named Map, there are two requirements; you must define internal placeholders objects in the map configuration file, and add a WHERE clause to define the placeholder variables in each subLayer.

Note: These are the placeholders objects that you already defined in your map template above.

Tip: See the following example for how to hide a subLayer of a Named Map:

How to create a password-protected Named Map?

This high-level workflow describes how to create a password-protected Named Map, using the CARTO Engine APIs.

Tip: See this example for how to add a Named Map with auth tokens.