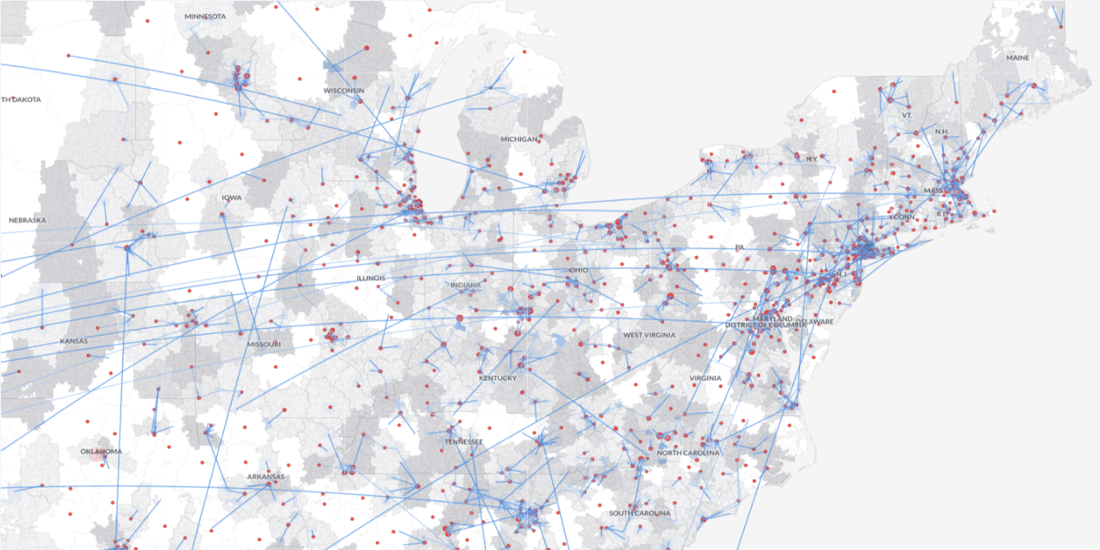 The proliferation of analytics is the result of attempts to manage calculate and determine the best course of action based on partial and/or incomplete data. And while another type of data analytics may seem unnecessary Alex D. Singleton Seth E. Spielman and David C. Folch have put forth an interdisciplinary analytics for better understanding our interconnected cities in their new book Urban Analytics.

At once an intellectual history on the evolutionary shift from Geographical Information Systems (GIS) to urban analytics and a practitioner's guide bursting with tips and insights on working with urban data Urban Analytics reminds readers of the processes involved in transforming data into information.

Designed for university students as well as professionals new to working with urban data spatial and statistical analyses and visualizations tools Urban Analytics aims to "serve as a complement to the already large literature on cities by exposing urbanists exposure to and training in a novel set of tools techniques and data." In addition to the book's sequential design which moves from introductory spatial concepts to more advanced applications of these ideas in subsequent chapters there are also supporting materials available for both teachers and students that feature interactive lessons on how to collect analyze visualize explain and act on urban data or in a word perform urban analytics.

Urban Analytics participates in the call to move beyond traditional GIS approaches to location data and spatial analysis. "From a pedagogic standpoint " the authors explain "we envisioned this text as an evolution of a traditional GIS textbook reflecting changing academic and industry practice and the increasingly fragmented nature of GIS and geocomputational functionality away from platforms to new technologies and emerging methods." Urban analytics requires a modern toolbox that equips analysts with open sourced data-sharing technologies and softwares to move past layering as the primary mode of data representation while advancing new formats better suited for representing urban data such as networks flows and other interactive data visualizations.

Full disclosure: In keeping with the greater sense of transparency location data permits it is only appropriate to be transparent about references made in Urban Analytics to CARTO including chapter four's overview of data visualizations a profile of Stuart Lynn our Head of Research and Data and examples of maps created by Mamata Akella our Head of Cartography.

Industrial advances economic opportunity and cultural attractions contributed to ebbs and flows of urbanization in the 20th century but the 21st century's technological achievements provide an unprecedented connectivity across geographical and digital spaces that have fundamentally altered our interactions with one another and our environment. Connectivity for Parag Khanna has diminished the importance of traditional political boundaries in favor of functional geographies whose infrastructure provides more insights on how supply chain networks drive the economy in an increasingly connected world.

Urban Analytics shares Connectography's sense that a paradigm shift in urbanized living is underway but Singleton Spielman and Folch are less interested in how the global economy incites competition between cities. Instead the authors focus on the production and consumption of data what they call the urban data economy within cities to advance a "data-intensive science of cities."

Urban analytics is the practice of using new forms of data in combination with computational approaches to gain insight into urban processes. Increasing data availability allows us to ask new and often complex questions about cities their economy how they relate to the local and global environment and much more.

In a sense the focus on dynamics within cities is pragmatic. Local government agencies are major providers of new data streams examined in urban analytics and these agencies tend to collect data within the political boundaries of their own cities. Past studies of intra-city relationships were often restricted to city views at aggregate boundary levels (census tract postal codes etc.) but urban analytics benefits from technological advances especially cloud computing and interactive visualization tools in its ability to view dynamics at a more granular level of detail.

For urban analytics the ability of data visualization tools and resources to balance geographical simplicity and specificity is key in assisting with urban governance. GIS software systems employed a process called generalization to simplify geographical representations of spatial data features based on the intended purpose of a visualization quality of available data and software storage size constraints. Whether built with vector data models or raster data models GIS representations traded detail specificity for digital simplicity.

One important thing to note is that it is possible to use computers to simplify geometry (e.g. automatically remove points) but its not possible to create a detailed representation of a real world feature from a simple one.

As a tool for assisting with urban governance data visualizations allow citywide monitoring of networks flows and other mobility systems at an unprecedented speed. For example local governments can use urban data to:

And while Mark Monmonier taught us about target="_target">how maps lie the authors detail new paradigms to use when working with and mapping urban data for a more precise view on how urban systems operate.

The importance of contextual paradigms and geodemographics

The authors rightly champion access to the deluge of new information sources on urban systems but they do urge caution about mistaking large amounts of data and precision. A key chapter in the book titled "Differences with Cities " contrasts a variable with a contextual approach to urban data.

There are two models used in urban analytics for studying the influence environmental factors have on our lives:

Each approach has its place but the authors spend some time teasing out potential pitfalls of a variable based approach related to the definitional uncertainty of abstract concepts: what do we really mean by "poverty" or "crime"? This uncertainty impacts variables selected as proxies for these complex social dynamics which raises concerns on whether or not data representations actually represent reality.

Because many place based datasets feature high margins of error the authors propose using a contextual paradigm approach for understanding urban systems. They highlight work in both the US and the UK that developed indicators and taxonomies of community types to illustrate how this contextual approach presents a more holistic and precise regional view to determine the best course of action for policymakers on topics including:

Urban analytics and the future of spatial data science

Urban Analytics is a welcomed addition to the recent debates among geographers spatial data scientists urban planners and municipal leaders looking to data to find better ways to manage cities and urban areas around the world.

There's much more to say about this topic and to learn more make sure to attend one of our CARTO Locations conferences later this spring.