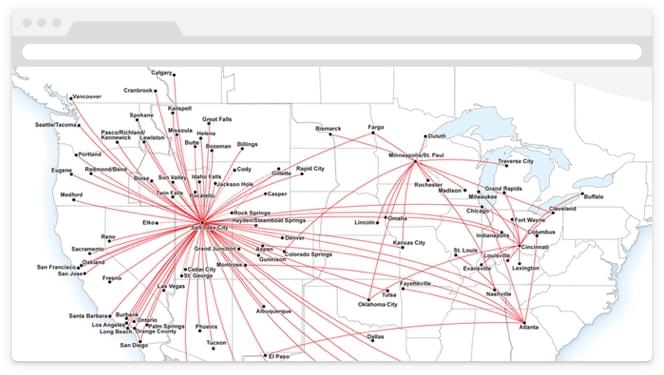 As a child nothing was more exciting to me than a chance to ride on an airplane. And after enjoying playing with the seatbelt buckle and feeling the crazy push of take-off acceleration I would usually settle in and page to the back of the in-flight magazine where the airline route maps were: where were we going today and where could we go tomorrow?

We can build route maps for any city in the world using airport and route data from OpenFlights.org. Start by uploading the airports.csv and routes.csv files into CartoDB.

We can see every destination available starting from Vancouver Canada (airport code "YVR") by making some custom SQL to join the airports table to the routes table and restricting to just the "YVR" routes:

That's the data we want but without the flight lines it lacks a sense of movement.

Our query is already joining the airports twice: once for the origin and once for the destination airport so we can turn the end points into a line very easily using the ST_MakeLine() function:

That looks much better! But there's something wrong about this map -- actually two things wrong.

First the routes are all straight lines and they should be great circle routes that's how the airplanes fly!

Second some of the routes go the wrong way around the world: no airline would fly from Vancouver to Sydney via Africa!

This is a bit complex but reading the nested functions outwards starting from the ST_MakeLine() we:

But what is going on with those horizontal lines?

There's a gap right where the horizontal line appears. 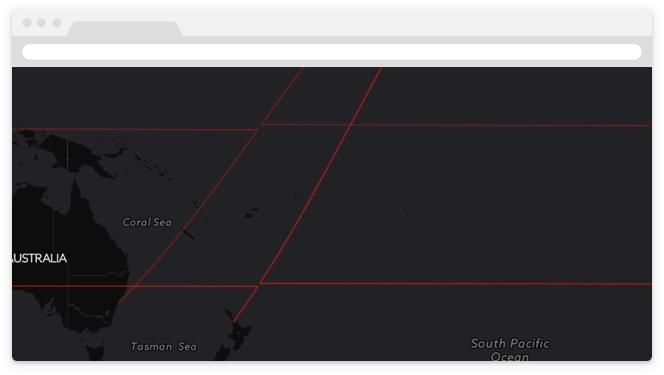 Everything is fine until an edge on the great circle route tries to cross the dateline. Then it zings around the world in order to hook up to the next edge. Fundamentally our map still does not understand the circularity of the world even though the edges we built do understand it. We have to work around the limitations of the flat map by chopping our data at the dateline to avoid having edges that cross it.

Of course this is a route map of all flights leaving Vancouver (YVR) so it's not exactly the kind of map you'd find in a in-flight magazine. However it's easy to build such a map just by changing set of input airports we use to build the routes.

Where the existing query says:

Replace the airport filter with an airline filter of "AC" to get an Air Canada route map: