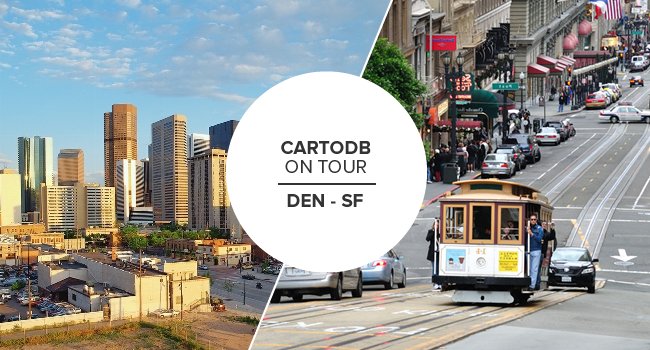 It may not be of the same scale as in the Rolling Stones Tour visualization we put together a while back but CartoDB is going on tour.

Starting next week the 14th we begin the tour in Denver Colorado at JS.geo where you’ll be able to catch Andrew on both the 14th for talks and the 15th for a bit of collaborative coding and/or free-association white-boarding. We'll also have a workshop on the 15th. Head over and get your tickets.

Starting at more or less the same time we will also be in San Francisco and you’ll be able to catch us for drinks on Tuesday the 15th at Thieves Tavern (We'll announce it on Twitter) and then later that week Javier our CEO will also be speaking at the Hive in Palo Alto about visualizing large and complex geospatial data sets and building location aware applications. You can check out more information here via the Big Data Think Tank.

This doesn't mean that we've forgotten about home quite the contrary later in January we're planning a CartoDB for beginners meetup pleace and time TBD but you can sign up here and then in late January we’ll be making a trip across the river to help out with Hack Jersey a hackathon focused on bringing the data journalism and developer communities together. We’ll be on hand to help out and the winner will receive the credit equivalent to one year of CartoDB's Magellan Plan so if you're in the Tri-State Area sign on up.

The saga then continues back in Europe as we head over to present at Mobile World Congress in Barcelona from the 25th to the 28th of February. Should you be attending MWC by all means stop by.

Sow whether it’s San Francisco Colorado New Jersey or Barcelona or even at our home offices in New York and Madrid. We hope to see you soon.