We created this map in hopes that public officials and relief organizations can identify the most at-risk neighborhoods and deliver them life-saving resources before and after this disaster strikes. 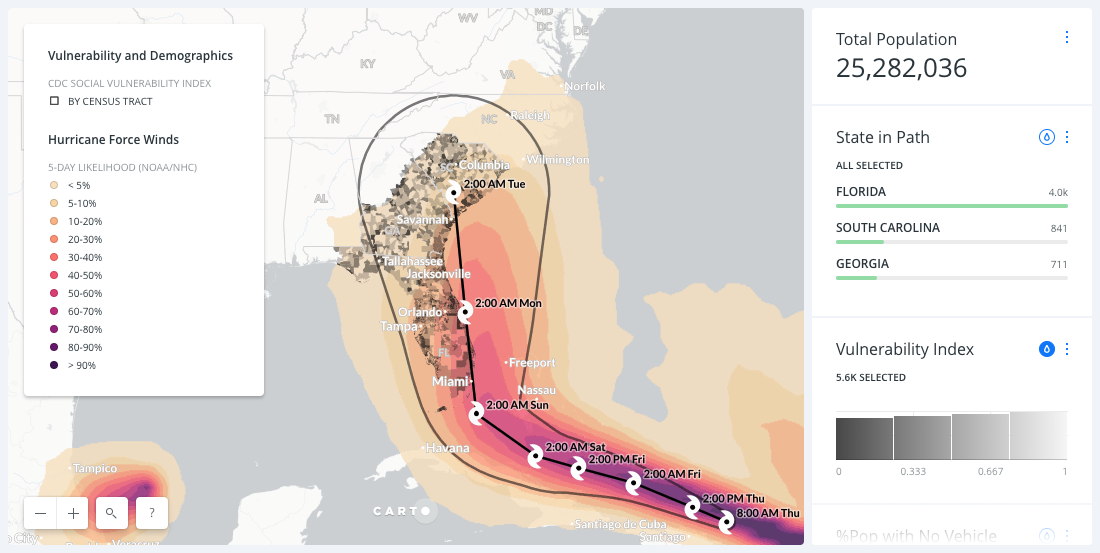 Editor's Note: This post was published using maps with real-time data during Hurricane Irma in September 2017. As those maps no longer display any data we've included a static image at the top of this post that gives you a sense of the types of maps we originally created for this post.

For the past week we've all seen the spaghetti models and cones of uncertainty that aim to predict the path of Hurricane Irma already the most powerful storm ever to form in the Atlantic.

Irma has already caused fatalities and widespread destruction on many Caribbean Islands as it rapidly approaches the coast of Florida expected to make landfall sometime this weekend.

Creating and visualizing these models is notoriously difficult but so is using them to prepare for the destruction that may — or may not — follow. As was evident in Houston with Hurricane Harvey just last week hurricanes affect communities in different ways which is another variable that public officials have to plan for above and beyond the unpredictability of the storm itself.

We created this map in hopes that public officials relief organizations and other support personnel can identify the most at-risk neighborhoods and deliver them life-saving resources before and after this disaster strikes.

"Be Sure to Follow All Instructions from Public Officials"

As soon as Hurricane Irma started forming in the Atlantic public officials throughout the Caribbean and Southern United States were imploring citizens to follow the instructions from local officials.

For those with smartphones and televisions this is a fairly easy task. But those below the poverty line may not have such quick access to crucial information. Especially in metropolitan areas like Tampa (pictured below) residents who are not proficient in English may have difficulty understanding official pronouncements.

One could create a map for example that shows census tracks that have a higher percentage of residents who are not proficient in English. Using maps like this we hope that public officials can better tailor the style and substance of their message in order to maximize its impact.

Executing a mandatory evacuation is a monumental undertaking.

Southern Florida alone has 6.5 million residents many of whom are reluctant to leave their homes behind and visualizing data from the SVI reveals additional barriers for public officials.

In the area of Florida most likely to experience hurricane-strength winds (pictured below) several census tracts have the highest ranking of residents without a vehicle.

By visualizing these demographic measures public officials can better understand the challenges of a mandatory evacuation and create more targeted messaging and strategies to address these groups of people.

"Help Is On Its Way"

Storm preparedness also depends on the homes that will be affected. Ideally every structure will have a hurricane-resistant roof shutters on the windows and a strong foundation but especially in Florida that's hardly the case.

There are thousands of mobile homes throughout the state which presents unique challenges infrastructural challenges before the storm and after.

In addition homes that are considered "crowded" or "multi-unit" are likely to need more resources that single-family homes. Even if public officials aren't able to help these areas before the storm at least they can know the most vulnerable areas for when it's time to deliver relief.

We're Here to Lend a Hand

With the dire predictions surrounding Hurricane Irma perhaps the only good news is that the most valuable data for public officials to prepare and respond to the storm has already been collected cleaned and visualized. Using public datasets we've shown which areas are most likely to be affected by the storm and their relative ability to cope with such a devastating disaster.

We hope this storm makes a last minute detour out to sea but in the event that there is a direct hit the impact will be felt by these communities for months if not years to come. If you are an organization working with these groups of people please reach out to our Community team by emailing community@carto.com and let us know how we can help you.