Using credit card data, one of the largest banks in Spain created an Urban Discovery tool that describes city dynamics and compares areas from different cities. 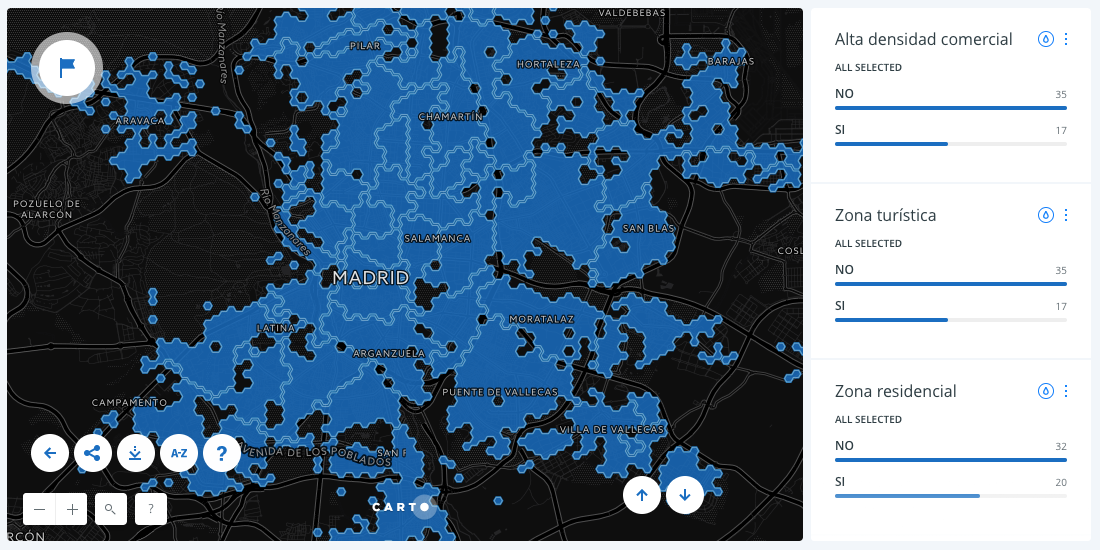 Administrative municipal boundaries such as districts and neighborhoods are often used to describe the behavior of citizens that live within cities. However in most countries people interact within cities without constraining their activity to district or zip code boundary constraints.

So why do so many data visualizations and behavioral explanations of cities rely on administrative divisions that rarely change?

Creating a Network of Connections

The first objective of this project was to establish relationships between different areas of the city using card transactions.

In this case BBVA chose to describe economic mobility patterns through businesses that shared customers.

BBVA calls these links payment duos and below you can see the co-payment networks obtained for the cities of Madrid Barcelona and CDMX. Creating the network of connections was the foundation for identifying polygons (areas) in the cities that they analyzed.

BBVA wanted to find a new way of dividing the three cities using this data. They applied community detection algorithms to the three networks to try to find comparisons between the cities.

By using a similar methodology in all three locations they created both clusters of macro-communities and communities essentially both large and small clusters that shared similarities between cities.

These clusters were the basis for finding geographically-constrained commonalities between different groups of people. This method can be applied to any large dataset commercial activity or otherwise.

(The shapefiles containing the macro-communities and communities for each city are available to download in the data story).

The next step was to identify the different common attributes of each community.

From their data BBVA found more than 25 variables associated with three agents: the merchants the clients and the timestamp of the transactions.The last step of the characterization process was to combine these variables to create the 17 attributes of consumption used in their Urban Discovery tool.

Other attributes were determined by mixing variables in the data.

All of this careful spatial data analysis results in an interactive tool that allows users to select which attributes they are interested in and see which communities have them.

Anybody visiting or living in a large city will rarely take it all in: we end up scaling it down to a limited area based on where we live work study or where we spend our free time or engage in leisure activities.

The Urban Discovery initiative sets forth an innovative approach to analyzing city dynamics with Location Intelligence identifying functional areas through anonymized data from credit card transactions to visualize and to compare activities in different areas that are not tied to traditional city boundaries.

This tool has many potential applications that can change the way cities and enterprise businesses function:

To discuss the initiative further join our webinar with Juan de Dios Romero and Juan Murillo from BBVA Data & Analytics and Isabel Garate Partner and Project Manager at CARTO who will share: