HALO, together with its donors, has been clearing landmines and unexploded ordnance (UXO) in Nagorno-Karabakh since 2000. 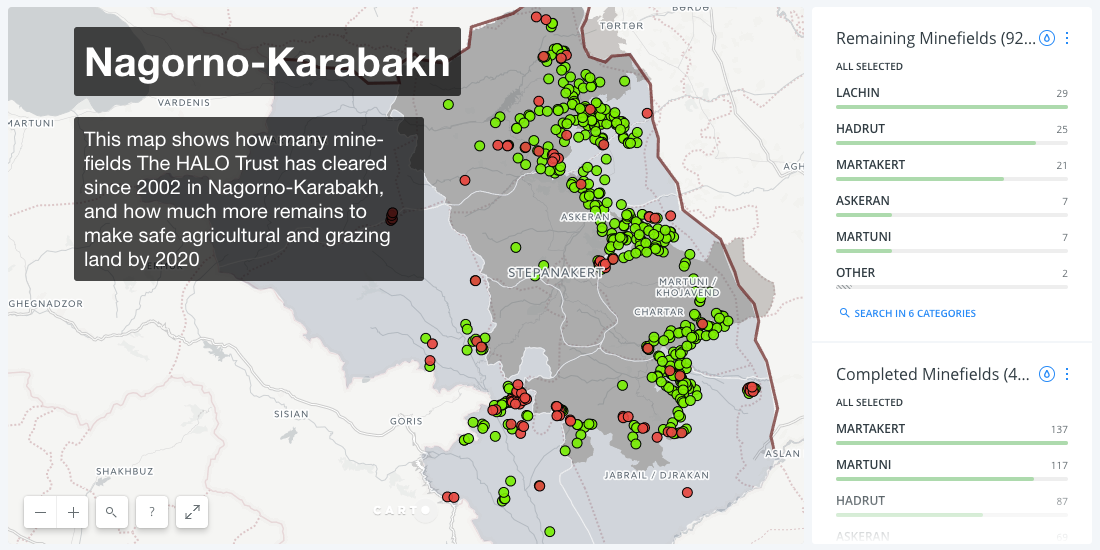 Nagorno-Karabakh is a landlocked disputed territory in the South Caucasus internationally recognized as part of Azerbaijan. As a result of the collapse of the Soviet Union the region became locked in conflict which intensified into all-out war from 1992 to 1994.

Landmines were laid across large swathes of land by both Armenian and Azerbaijani forces and cluster bombs were dropped extensively by the Azerbaijani Air Force. Around 20 000 people died and hundreds of thousands were displaced. A ceasefire was agreed in 1994. It held for over two decades but the lack of a formal end to the war left the Armenian population of Nagorno-Karabakh isolated. Fighting broke out again in April 2016.

The HALO Trust (HALO) is a UK-based NGO leading the effort to protect lives and restore livelihoods threatened by landmines and all the deadly debris of war. HALO together with its donors has been clearing landmines and unexploded ordnance (UXO) in Nagorno-Karabakh since 2000.

Nagorno-Karabakh is a remote and beautiful place with a unique identity but its people have been haunted by landmines for more than two decades. In fact the Karabakh has one of the highest per capita incidence of landmine accidents in the world which is on par with Afghanistan -- a third of the victims are children.

HALO has been using CARTO to visualize and summarize landmine UXO and accident data. HALO can quickly map display and analyze data dynamically using the Esri ArcGIS Server connector which allows for near real-time data updates every hour. Using CARTO technology HALO is able to visually demonstrate to donors the impact it is achieving through its mine clearance and UXO programmes in 16 different countries around the world.

To learn more or to donate please visit: http://www.halotrust.org.

Every month CARTO highlights a Map of the Month that uses location data to tell a story in a clear compelling and visually stunning way. We love hearing your suggestions! If you have a map you think would be a good Map of the Month please submit it here.