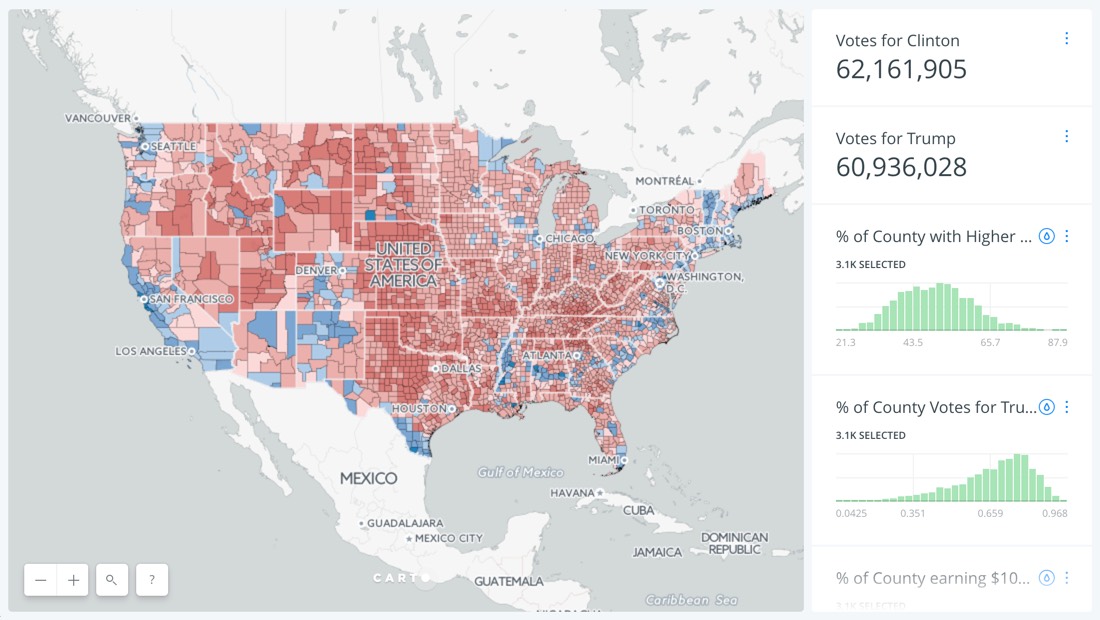 After the inauguration of President Trump and the mobilization of millions of people around the world to protest his presidency it seems timely to examine the data behind the results of the U.S. Presidential Election. Citizens were fueled and deflated by pollster data with many believing random data from divergent news sources as absolute fact. The 2016 Presidential Election data revealed that the United States may actually be more divided than assumed. Election results combined with census data from the Data Observatory in a CARTO dashboard explore that divide.

Maps made by the New York Times liken Clinton’s United States to an archipelago of islands amidst an ocean of Trump supporters and other maps demonstrate how the divide has widened over the last several elections. What characterizes that separation?

This CARTO dashboard allows users to explore the election results with widgets on selected county-level demographic data. Filter by educational attainment and household income to see how the vote turned out for subsets of the United States.

By selecting only counties with higher levels of educational attainment predominantly urban counties or counties with college towns are represented. In counties in which over 70% of the population have at least some college education Clinton wins the election by a landslide with 10.8 million votes compared to Trump's 6.7 million.

In the inverse counties with lower levels of educational attainment the data visualization displays rural counties in Appalachia and the South. Counties where less than 40% of the population have achieved beyond a high school diploma voted for Trump almost 3 million to 1.2 million. The divide is not as stark when comparing how counties voted based on income.

Generally wealthier counties voted for Clinton and poorer counties voted more for Trump but the margin is not as wide as the educational divide. In this election educational attainment played a major role in how people voted.Choropleth maps like this one can be problematic when representing this kind of data because large shapes tend to dominate smaller ones. In this case it looks like most of the United States went red and that Trump won support by and large. However the widgets tell a very different story (Clinton won the popular vote). So why use a choropleth map then?

This kind of map is one of the easiest to understand with only one type of symbology (color). People usually process one piece of information better than multiple pieces at once therefore using two types of symbology is typically more complicated. For example with two types of symbology the viewer has to process both the size and color of a symbol and on a map proportional symbols and colors can get cluttered. A choropleth map also preserves the relative location of a place making it easier for users to find their home county.

In this map each county is represented by a circle. The size of the circle is proportional to the number of votes and the color corresponds to the winner in the county. Smaller red circles are now balanced by larger blue circles and neither color dominates but it’s much harder to identify which circle represents which county. The symbols can also overlap in neighborhoods of small densely populated counties.

Find out more about election mapping and how to use census data and the Data Observatory to power local regional and federal campaigns or provide accurate data representations in your stories with this election webinar.

In creating these maps only votes for the Democratic or Republican parties were used for calculations and third-party votes were ignored.Election results were scraped from the New York Times on December 19th and demographic data came from the US Census ACS 2010 - 2014. Alaska is omitted because results are not reported at the county level. 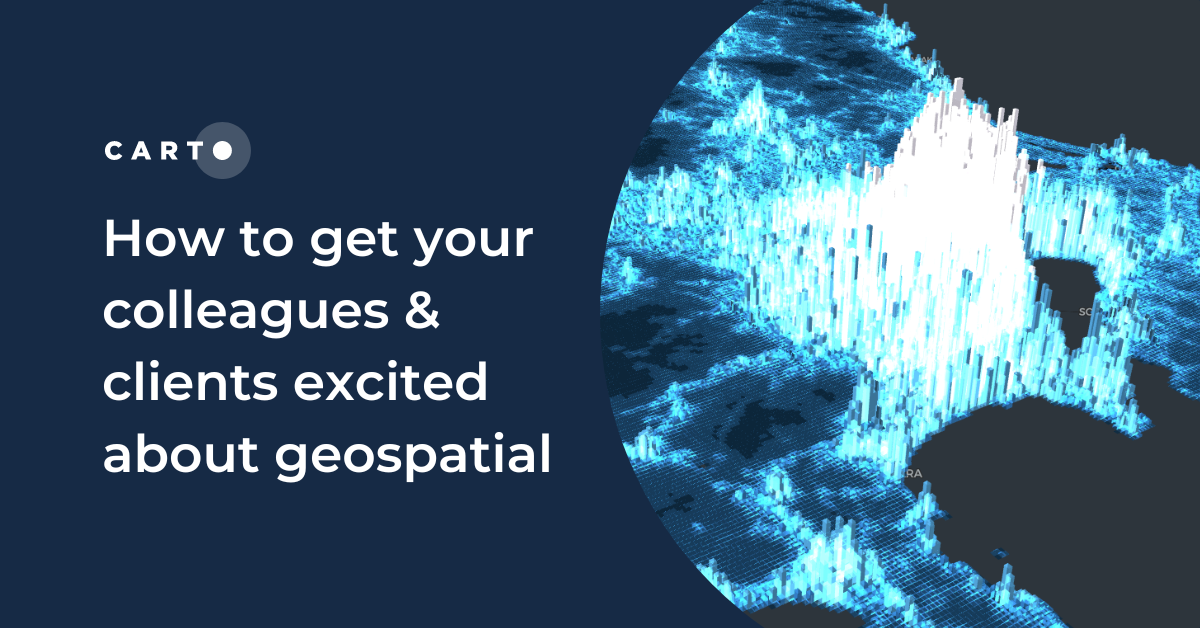 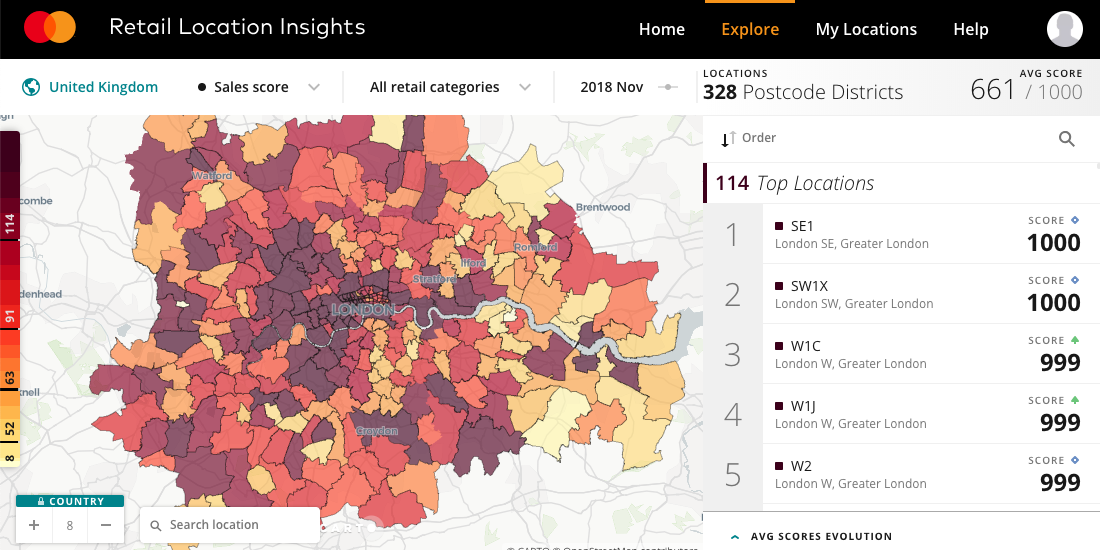 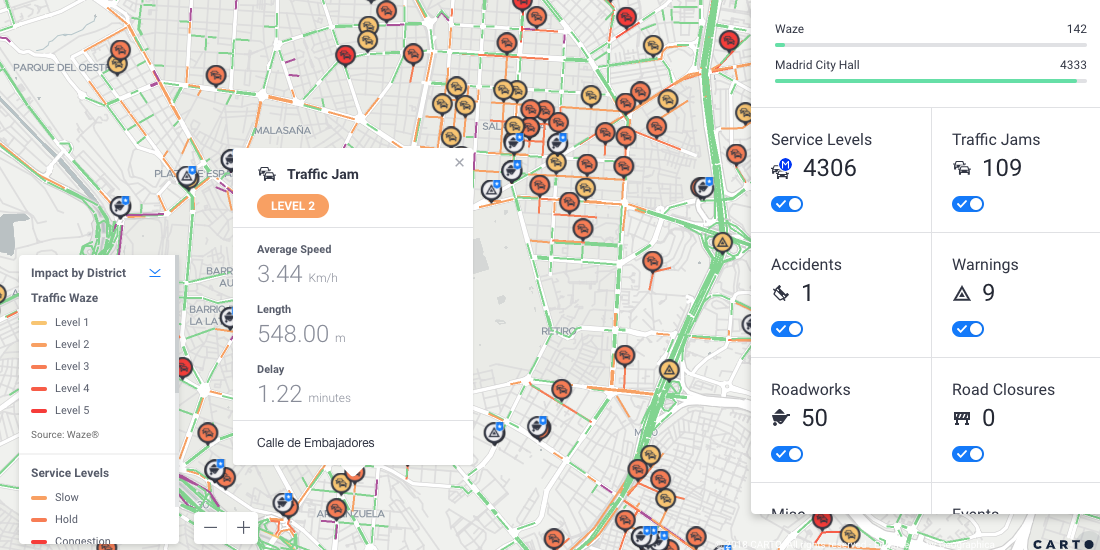