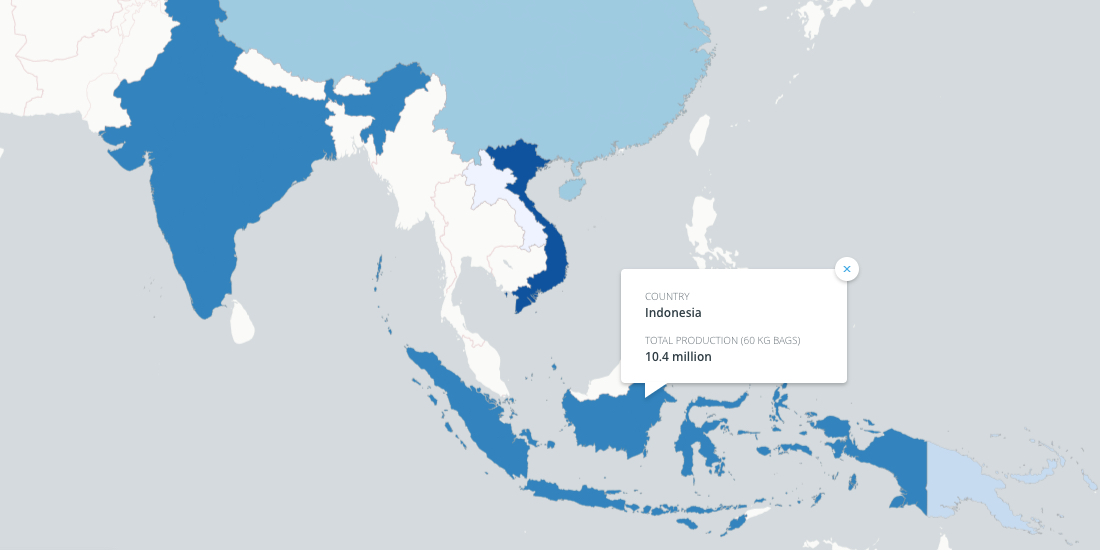 Since their beginnings in 14th century Turkey coffee and coffeehouses have had a significant cultural impact and green unroasted coffee is one of the most traded agricultural commodities in the world. There is a good chance that you're enjoying a coffee now as you're reading this blog but do you really know it's origin?

If you ask Google how many coffee farms there are in the world a frequently cited number is 25 million. However this number has recently been disputed and Enveritas an organization whose mission is to help all coffee farmers participate in a globally sustainable coffee industry decided to carry out their own analysis.

With a particular focus on unorganized smallholders they wanted to use CARTO to help them visualize the results of their analysis and to continue their work towards building more sustainable supply chains to help bring farmers out of poverty.

These smallholder farmers rely heavily on coffee as a source of income but face unique challenges in improving production. This is apparent in the yields captured in the 18/19 coffee harvest. While average yields on Brazil farms for arabica coffee are over 1500kg of green coffee per hectare their counterparts in Ethiopia see an average of just over 250kg.

There are 12.5 million smallholder coffee farms

Based upon analysis of over 20 000 interviews in 20 countries Enveritas estimate that there are 12.5 million smallholder coffee farmers - just half of figures mentioned earlier. With this updated number they are able to better understand the issues facing these farmers and improve their livelihoods.

These 12.5m farmers live predominantly in 20 countries where the climate and soil are suitable for growing coffee. Almost half of these smallholder farmers can be found in Ethiopia (2.2 m) Uganda (1.8m) and Indonesia (1.3m). Vietnam Burundi Kenya and Colombia each have over 500 000 farmers.

Recognizing the diversity and magnitude of farmers contributing to our coffee each day is the first step to responsibly sourcing this coffee. True sustainability in coffee supply chains needs to start with verifying and mapping the challenges and behaviours of coffee farmers in each origin. This is particularly urgent as the farmers we source from start to face new challenges from a changing climate.

Of the 12.5 million smallholder coffee farmers Enveritas estimate that at least 5.5 million live below the international poverty line of $3.20 a day. The highest levels of poverty are observed in Africa and Oceania.

The majority of coffee farmers living in poverty are concentrated in six East African countries. These countries account for approximately 63% of the world's coffee farmers living in poverty and 71% living in extreme poverty. The region is characterized by low coffee yields that result in low income to these farmers. Low coffee yields are generally solvable through simple and organic means such as pruning and stumping of trees - however these methods require targeted and systematic training programs.

Enveritas estimated the number of farmers using the total production by country (triangulating official production statistics export volumes data and estimates from experts and institutions) and average farm production from sample data sets gathered. The study extended to 20 of the 58 coffee origins that cover 92% of the world's production.

Enveritas then built an economic model of poverty levels across these countries. For seven countries the estimates are based on unique poverty data collected by Enveritas using the Poverty Probability Index (PPI®). For the rest of the countries they drew from several sources in order to approximate the number of coffee farmers living under the two poverty lines. Their analysis rests on World Bank rural poverty figures sub-national poverty indices insights from Enveritas' field teams farm yield and size estimates as well as several publications.

Enveritas are working with different actors across coffee and cocoa to ensure supply chains are more sustainable for the farmers involved. We know that while responsible sourcing is not the status quo it is achievable.

Enveritas have spoken to 100 000+ farmers across 13 countries to date and plan to use data and geospatial tools to empower them and reduce challenges in their lives. Enveritas welcome any ideas for partnerships and can be contacted via their website at enveritas.org or at info@enveritas.org.