We have created a CARTO on Google Platform product product. If you are looking for a Maps Engine replacement please review our new offering. You can also find an explanation of features and benefits of CARTO and information about migrating your existing projects.

What do both services offer?

The services in CARTO and Maps Engine are very similar - including a web interface to manage data and create maps and a set of APIS to access data request maps and create applications. The following illustrates service parity across the two platforms: 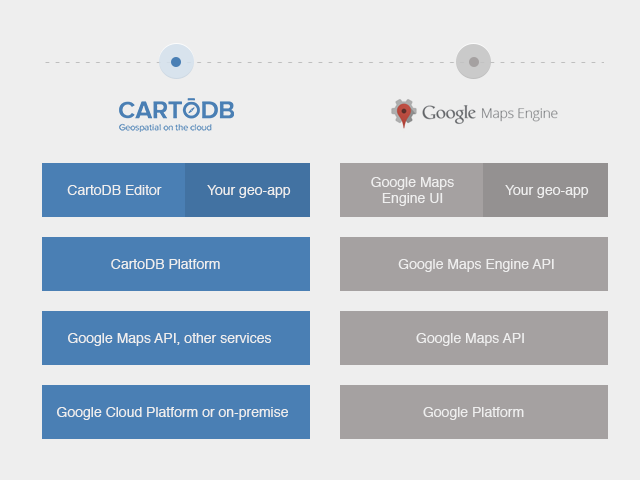 Google Maps Engine provides a simple interface for interacting with your hosted data and maps. At CARTO we offer additional benefits. We’ve worked hard to refine the process of working with maps and geospatial data online through simple interfaces and intuitive interactions. We are constantly improving measuring and refining those interfaces. The ease-of-use in the CARTO Editor has quickly made it a favorite among university educators data analysts sales managers and journalists. Maps are no longer just for for developers! 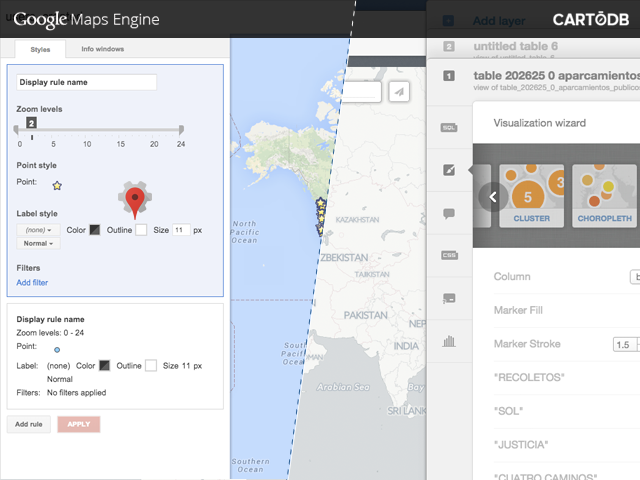 Both Google Maps Engine and CARTO offer support for a broad range of data formats and file types including point line polygon and raster import as well as analysis and rendering. And in addition to those file types and formats CARTO also supports file extensions such as GeoJSON and GPX.

CARTO and Google Maps Engine expose full suites of APIs that allow developers to leverage everything from data import to map creation. What this means is that most of the functionality you see in the CARTO Editor actually runs on APIs that can be leveraged from your own applications and interfaces.

For users looking to leverage geo-processing capabilities CARTO offers access to a library called PostGIS which enables a comprehensive list of GIS and data filtering functions including buffers intersections proximity searches and more.

What types of maps can you make? 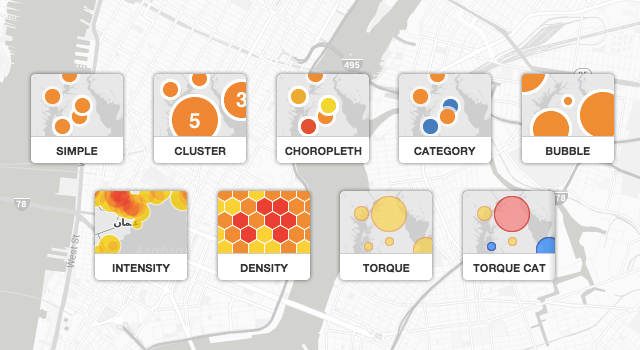 In terms of map design Maps Engine took a slightly different approach when exposing customization tools to the user. Both services allow the user to interact with simple wizards to modify the style data on the map. When you dig deeper Google Maps Engine had created a unique JSON structure for applying styles to maps. Alternatively CARTO exposes CartoCSS to users. CartoCSS is a more widely used map styling language that is immediately comfortable for anyone familiar with CSS. For users switching to CARTO from Maps Engine the CartoCSS language will still allow for attribute- and zoom-dependent styling. It will also open up a wide range of new features to leverage for your maps including better control of color scale and positioning.

How can you leverage the Google Maps API?

When looking for an alternative the ability to use these APIs will be a key consideration for many Maps Engine fans. Fortunately we have built CARTO so that the full set of tools available in the Google Maps API toolkit can be used with data hosted on our services. Any API you might aim to build on is included in the services - from Google basemaps to Street View Directions API and Traffic API.

To help get you started we've put together a set of examples that show how you can use custom data hosted on CARTO with Google Maps API methods. Take a look at the full set of examples:

How do the services compare in terms of performance and scalability?

A key benefit to Google Maps Engine users is access to the Google infrastructure for their own products. You might be surprised to know that CARTO can actually run on the Google Cloud Platform (as well as other infrastructures) and that we have created a specific server cluster within Google Platform. If you are interested in using this feature ask us about CARTO on Google Cloud.

In addition to the location where CARTO can be run we have developed technology that enables us to provide world class performance and reliability in our services no matter who runs them. For example some of the world’s most popular websites use CARTO to regularly publish maps to their viewers. Our services scale and adapt to handle every possible user. Here are some of the ways we do it:

If you are interested in more details on the CARTO on Google Cloud solution ask us for an early look at our forthcoming white paper detailing its performance in real-world scenarios. We have seen sustained performance at more than 50 000 requests per second and updates every 10 seconds.

Often one of the hardest parts to making a map is finding the right data with which to get started. As a solution Google Maps Engine offered public datasets that users could query. Similarly CARTO provides frequently requested data such as Natural Earth and USGS datasets for simple integration with your own data. On top of these curated datasets CARTO also gives users access to Twitter Firehose MaxMind IP address database and other sources of data to create maps from the most interesting data on the web.

There are three existing options for you to use. The process to manually download your data from GME and import it into CARTO is straightforward for many users. If you need more or have a lot of data we have been working with two of our certified partners AppGeo and HabitatSeven to create a migration tool to help ensure the migration process is smooth and complete. The tool authenticates with Google and using the ogr2ogr tool moves data from GME to CARTO. It is as easy as selecting the tables you want to migrate and entering your API keys. Finally the third option is FME

We will make an announcement about the migration tool very soon stay tuned!

We know that a lot of existing Google Maps Engine users are going to be looking for a similar set of tools to maintain their projects without significant changes. For users and developers that have grown to rely on the service we want you to know that there is no need to panic. CARTO provides an excellent service that is a viable alternative for the complete Maps Engine product. Both services were built to be fast scale to millions of requests and simplify your development of geospatial projects.

We have been working to provide a solid offering called CARTO on Google Cloud Platform and to ensure that Maps Engine customers will have all the power of Google Maps API available on CARTO. We already have several Maps Engine projects in migration and several partners assisting.

Are you interested in moving from Google Maps Engine to CARTO today? Get in touch to talk to one of our experts about using our custom migration tool to move your hosted data with ease. We can talk through your project needs and timelines and come up with a plan for your move to CARTO right away.

We can’t wait to see what you build on top of Google Maps and CARTO!