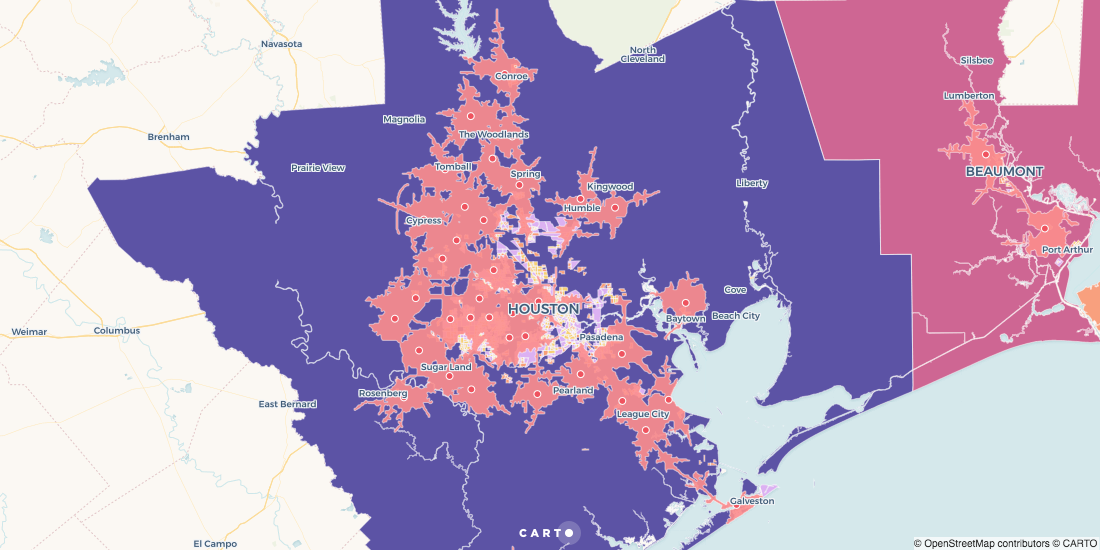 Although the landscape has drastically transformed over the last decade retail analytics have not kept pace which is causing some retailers to close the wrong store locations. McKinsey reports that many retailers rely on “four-wall economics” to assess store performance when they should be using consumer behavior insights extracted from location data with spatial analysis. And where McKinsey finds geospatial analytics most valuable is in “helping retailers make better decisions about expanding or contracting their store network.”

To show this in action below we’ll build a spatial data model to maximize coverage in underperforming market areas. In building our model we used publicly available data on Target store locations to simulate the geographical conditions for a national retail network. With our model our goal will be to:

Our first step is to establish some benchmark on current market areas across the country. Core-based statistical areas (CBSA) provide the necessary altitude for identifying market penetration in key areas. Designed by the Office of Budget and Management (OBM) these geometric areas center around urban cities with populations of 10 000 or more and extend to adjacent counties that

The map below shows current CBSA areas across the country:

Because CBSAs locate high-population density areas where we can expect higher levels of commercial activity they provide a good benchmark for identifying any significant coverage gaps. However CBSA geometries the granularity needed to distinguish between markets as well as monitor penetration within each market. Here we'll need to add socio-demographic data related to the population of each CBSA to our model to begin determining which markets are most competitive. We can do this by running the following spatial commands:

These steps produced the model below:

Here we've sequentially classified each CBSA based on addressable population with yellow representing areas with lower total population counts and dark purple representing areas with higher total population counts and included a pop-up window with more data for each geometry. In addition we've intersected each CBSA anchor city with census block group data to provide socio-demographics on each metropolitan area across the country with values on median income median age total population population per square kilometer number of households and average population per household. With these values we then applied Moran's I to detect areas of interest base on high population density and median income. Moran's I will be helpful when it comes to finding suitable sites within each CBSA later on.

Now we're ready to add data on Target's current retail footprint to the model which we did with the following steps:

These steps completed our model displayed below.

Immediately we see our current store locations more or less align with CBSA areas which means there aren’t any new markets to enter. What merging our trade area isolines with our CBSA geometries with the union function allows us to do is estimate:

What these steps allow us to do is estimate our current market reach and pinpoint what markets have the greatest potential for expansion. A cursory search finds that Nashville Houston and Seattle all seem like potential markets where Target can open new stores based on our model's potential store count. Let's take a closer look at each CBSA to determine which market is most suitable based on our existing footprint and current market profile.

The model generates a potential new store count based on the specifics of each CBSA but our aim is to expand where we'll likely see the greatest impact. As such we'll want to consider potential new stores alongside other measures especially the addressable population and the average population served per store when deciding between Nashville Houston and Seattle.

Although Nashville has the highest count for potential new stores the addressable population is quite low. If we were to open new stores here then our average population served per store would be drastically reduced which could end of increasing overhead costs related to labor and inventory. In addition notice that beyond Target's current footprint there are few census block groups classified as High-High (gold) which means that there aren't many sites with socio-demographic profiles where population density and median income match. The High-Low areas are riskier locations for potential new stores as these areas tend to have high population counts and low incomes or vice versa.

Seattle has the second highest count for potential new stores with a total of 10 and a higher addressable population of approximately 3.5 million people much higher than Nashville which means its average population served per store count is higher as well. However notice that most of the High-High locations in Seattle are clustered in pockets. This limits the amount of suitable locations available since Target wouldn't concentrate all its possible new stores in one area. As such while Seattle has growing demand there aren't enough suitable sites to satisfy all unmet demand.

Houston has the lowest count for potential new stores of our three market areas with a total of 7 potential new stores in addition to the 37 current locations. However its addressable population is far greater than Seattle's with over 6 million and an average population served per store of 138 000 people. This means Target could open fewer store locations while serving an average population larger than either Nashville or Seattle at each site. In addition the amount of High-High locations are more dispersed throughout the greater Houston area reducing risk of sales cannibalization between Target stores.

In our simulation Houston Texas is the obvious choice of where Target should consider expanding its market reach.

This analysis focused on consumer behavior metrics and worked with spatial analysis to look beyond retail's "four wall economics " but this is just a first step. Retailers could expand on this analysis in several ways for a more granular view of performance in each market area. Some of these analyses could include:

These are just some of the ways retailers can start introducing geospatial analytics into their site planning decisions today.