This grocery chain has 1,110 stores served by 8 distribution centers. We used location intelligence to optimize their supply chain, saving $1.1M in fuel and time costs. 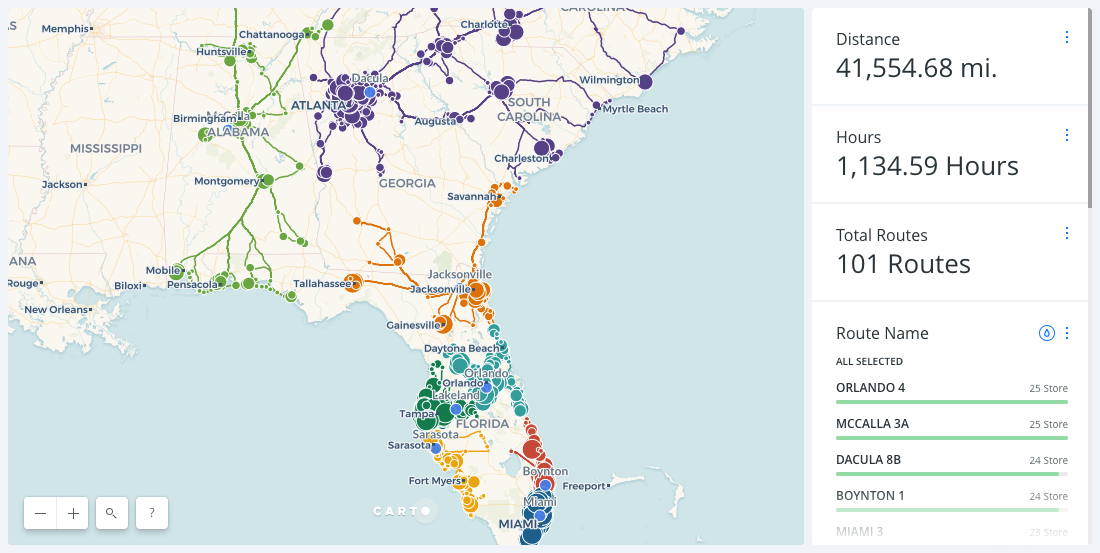 Supply chains are a critical  and often unnoticed  part of our everyday lives. Almost everything that we purchase in a store comes to us as a part of a supply chain and managing these networks is a complex and ever evolving task.

From finding better ways to serve stores  the optimal location for a new distribution center  or understanding how goods are reaching their final destination, every aspect of supply chain design is tied to location data.

In this post we will show you the impact and importance of a well-designed and optimized supply chain for any business.

Supply chain network design is the process of building and modeling a supply chain to better understand the costs and time associated with bringing goods to market with the resources and locations available.

Some questions that are commonly evaluated as a part of this process are:

The end goal is to create the most efficient network possible, meet the demand of customers, and ensure the lowest possible cost to serve your network.

This process includes many different variables and models but many of them are tied to location, such as your distribution centers, store network, and possible routes to serve those stores.

Other assumptions, such as number of transportation resources, assumed delivery time, and total route time are also tied to location - even though they might not initially appear to be impacted by location. The exact routes and road networks play a major role in how you will ultimately design your routes and assign resources to different clusters of stores.

How are SEUR optimizing their cold transportation network?

Publix has over 1,110 stores served by 8 distributions centers.

The company expanded into North Carolina in 2011 and Virginia in 2016 and will likely continue to open new stores in these states.

However, the company has not opened a new distribution center to serve these new locations.

To understand the current supply chain network design we:

This analysis gives us the length of the trip and the drive time for the entire route. After looking at the data, some routes needed to be modified to make sure they could be completed within a standard shift  or if that was not possible  that route would need to be split into two shifts.

Assuming that a drop off takes 30 minutes, we then optimized the routes even further and split some of the routes into smaller routes to ensure we had as many routes as possible that could be completed in one shift.

In the resulting map you can see that to use each route once  it would take:

You can see that the Florida routes are shorter and well optimized apart from a few routes, but the Dacula GA (purple circles) and McCalla AL (light green circles) distribution center routes are very long and serve a significant amount of stores.

Using CARTO we can see some obvious improvements such as McCalla 5 (the green route to Chattanooga), which is better served by the Dacula 6 route (the purple route to Knoxville).

Want to try some of this analysis for yourself? Sign up for a free two-week trial here.

To select this location we looked at data from the Data Observatory, specifically the employment, total population, and roads data to find a large city near major highways with connections around the region.

We narrowed this down to three candidates:

All cities are suitable based on the population and employable population. However  after looking at the proximity to the current store footprint and proximity to major roads, it is clear that Charlotte is the best suited location for the new Distribution Center.

Outcomes of the network optimization

The process for analyzing the new routes is almost identical to the process above: create logical clusters, analyze the routes, review and refine the routes.

After running this same analysis with the new store clusters and distribution center (resulting map here and below), we noticed some significant optimizations in the supply chain network from our original map at the top of the post:

This all accounts for estimated annual savings of $950 000 to $1.1M savings in fuel and time costs.

There are other additional benefits which are not accounted for  such as increased ability to serve stores and deliver fresh foods.

You can conduct supply chain network design with any location intelligence tool, but we're a little biased here.

As you can see in the examples above  CARTO has several key advantages that allows it to run complex Supply Chain Network Optimization analyses like the Publix use case:

CARTO brings together the data  analysis  and visualization to make complex analyses like supply chain network design and optimization possible and allows you to not only understand  but visualize and act on the insights derived from your analysis.

Have a supply chain you're designing?

Request a demo and we'll walk you through the same process with your own data.

Hear from our experts
Request a demo