CartoDB is built on top of PostGIS the powerful add-on that turns PostgreSQL into a spatial database. Many popular Geoprocessing functions in GIS software can be done with PostGIS queries and this blog series will provide a one-for-one replication of the functions in QGIS' Vector>Geoprocessing Tools menu. 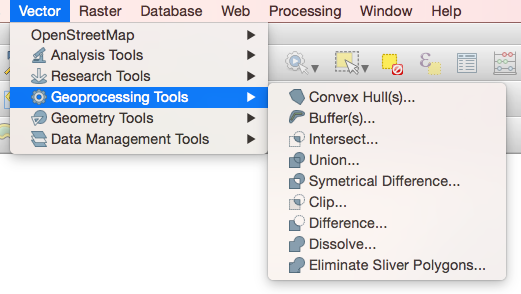 In QGIS the Vector menu has all sorts of goodies but we'll focus on the Geoprocessing Tools submenu which has Convex Hulls Buffers Intersects Unions Dissolves and more. If you're making maps these are important tools for the data-munging process and with a little SQL and PostGIS you can do them right here in CartoDB! We'll start with two: Convex Hull and Buffer.

A Convex Hull is the smallest convex polygon that can contain a set of other geometries. The process is often described as stretching out a rubber band around a set of points which will constrict to its smallest possible shape. Why would you use a convex hull in mapping? There are a few use cases: They can be useful for highlighting patterns in data and visualizing coverage areas. This whitepaper from Azavea uses them to analyze the "compactness" of congressional districts.

Let's start with a set of 12 random points over Brooklyn. With the points loaded in QGIS (with a nice borough boundary layer courtesy of the New York City Planning Department) running the Convex Hull wizard will generate a new shapefile with a single polygon that encompasses all 12 points. Here's what the new convex hull looks like on the map: 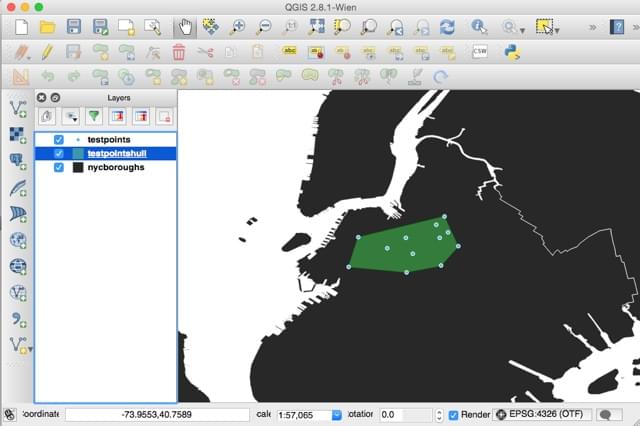 Now let's load the same data into CartoDB and name its table testpoints.

PostGIS has a function called ST_ConvexHull() that will generate a convex hull from a collection of geometries. However our testpoints dataset is a bunch of individual points so we must first collect them into a geometry collection using ST_Collect().

So our first pass at at a convex hull SQL statement looks like:

This will work but remember that we must have a the_geom_webmercator field in our result set for CartoDB to render it on the map. To accomplish this we use ST_Transform() to convert the WGS84 coordinates in the_geom to web mercator coordinates for mapping:

There's our Convex Hull! This isn't very useful on its own but you could use this new polygon in combination with others in your analysis or save it as a new table using Dataset from Query in the CartoDB Edit menu.

A buffer is simply a polygon whose border is a specified distance from another geometry or group of geometries. The resulting polygon can be used as a visual element on the map or can be used for further spatial queries (this is not optimal but that's another blog post. Check out how Andy uses it in this academy lesson on finding blues musician birthplaces within the Buffer).

Let's see about the creation of buffers in QGIS. In the screenshot below you'll see a buffer running on testpointsfeet. This is our original testpoints dataset converted from WGS84 to NY State Plane as Buffer will always use the units of the selected layer's coordinate reference system. Buffers in degrees wouldn't be very useful so switching to NY State Plane (EPSG:2266) allows us to run the buffer in feet. (1312.24 feet = 400 meters) We can see the new polygon layer is a series of circles around the original points. If these were real features such as Restaurants or Dry Cleaners in an area we can imagine the new buffers showing us their 5-minute delivery areas. 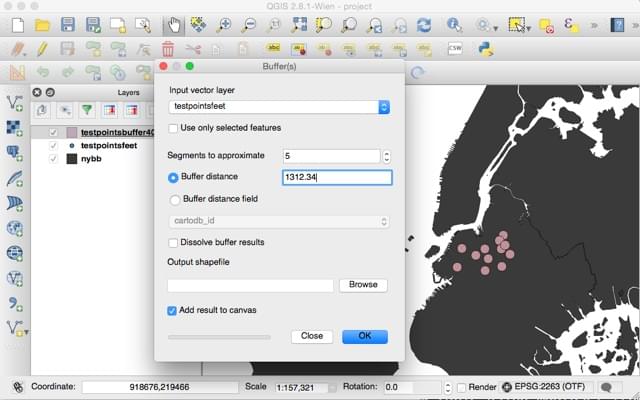 There's also a handy checkbox in the wizard that allow us to dissolve the resulting buffers into a single feature. Let's see what this looks like: 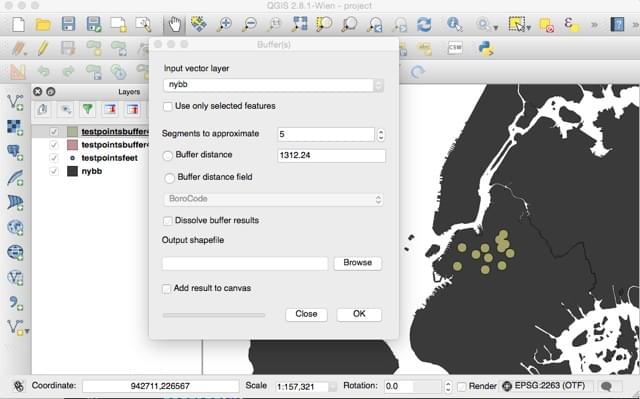 Where the original buffers were overlapping we now see them consolidated into a single polygon.

Now let's run the same buffer in CartoDB using ST_Buffer(). The docs tell us that there are 4 ways we can call ST_Buffer() 3 of which are expecting a geometry type plus the units for the buffer and one which expects a geography type plus meters. (More on geography vs geometry here.) CartoDB's the_geom column is a geometry so we can recast it as geography using ::geography as it is passed to ST_Buffer() then recast the results back to ::geometry for mapping. So our first pass at a 400m Buffer query looks like this:

Just like before we have to include the_geom_webmercator for CartoDB to map the results and that requires using ST_Transform() again:

To dissolve the results just like we did in QGIS we'll use the ST_Union() PostGIS function:

Here's an example of buffers used in a finished map showing 5 and 10-minute walking circles around Boston's Subway Stations.

Thanks for reading! In the next installment we'll cover the PostGIS equivalent of Intersect and Union. Stay tuned to learn how the power of PostGIS can make your maps shine.