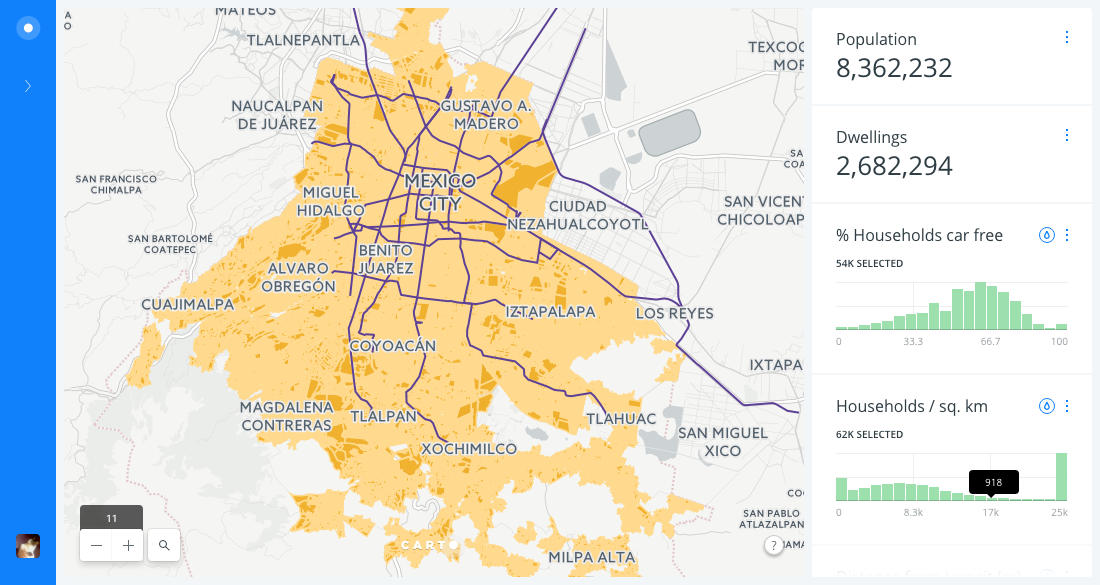 We're thrilled to announce that the Data Observatory is welcoming Mexico into the fold with an impressive array of demographic data from the Mexican Census. This new data is specific to the block level in metropolitan areas!

With over 300 measures Mexico's census is one of the richest in the Observatory. In addition to bread and butter data for normalization like population households and dwellings this census contains detailed information about household access to amenities from running water to computers.

Using the new Carto Builder we put together a dashboard in just a few minutes to take a look at Mexico's census at its most detailed at the block level in Mexico City.

In particular we were curious about transit: New York City and Mexico City are comparable cities with 8.5 million and 8.9 million people in their respective urban areas. Even the surrounding metropolitan areas are comparable comprising about twenty million each including the cities. New York City's subway system moves about 1.8 million people per day; Mexico City's 1.7 million.

New York City is remarkable in the US for relatively low rates of car ownership made possible by that public transport. Mexico City is currently in the midst of a pollution crisis which is driven in large part by auto emissions.

Many people in New York choose not to have a car because they don't need one to get where they need to go. Taking a look at Mexico City it looks like different factors are in play.

Using the histograms and filtering features of the Builder we could quickly see that blocks within a few hundred meters of metro lines suburban railway or Metrobús did not show lower rates of car/van ownership:

While the census in Mexico does not keep track of household incomes there is information about certain amenities -- in particular computer ownership -- that could be considered a proxy for wealth.

Filtering for areas with high rates of computer ownership quickly reveals a direct relationship to car ownership meaning that having the money to own a car is a much greater incentive than the requirement to have one because of poor access to transit.

Using very similar measures from the 2014 US American Community Survey (ACS) we put together an equivalent dashboard for New York City.

The similarities of scale in households and population are immediately striking. Experiment with filtering by proximity to transit and household density though and you'll see a starkly different pattern than in Mexico City: areas near trains and with high density have much lower rates of car ownership even if they're wealthy.