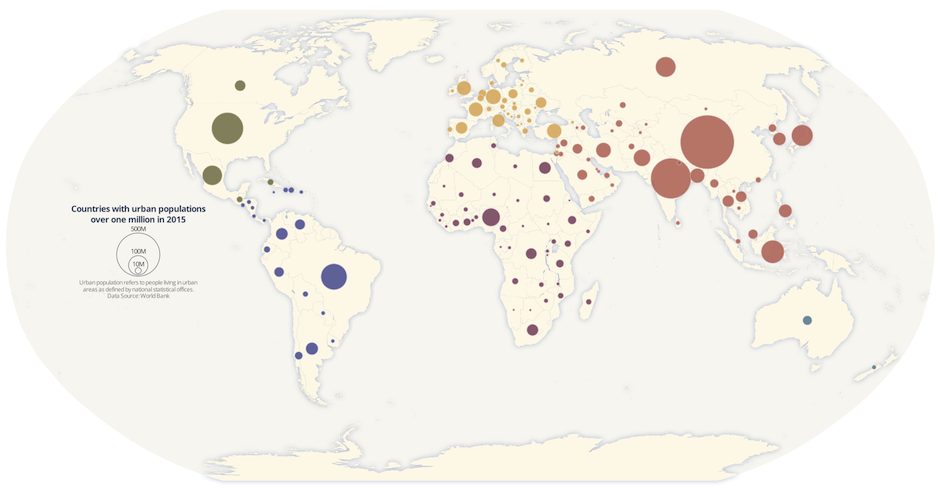 Proportional symbol maps are used to represent point data that are attached to a specific geographic location (like a city) or data aggregated to a point from an area (like a state). The area of each symbol on the map (usually a circle) is scaled according to its value at a given geographic location using either absolute scaling or range-grading. The result is a map where larger symbols indicate higher values and smaller ones lower values. This type of map is flexible in that you can represent raw data values (total population) or data that are normalized (percentage of population).

In this blog I'll walk through the basic principles of proportional symbols and some best practices when designing them. Then I'll cover the steps to make a map of 2015 urban population by country using the absolute scaling method.

There are two methods used to create proportional symbols: absolute scaling and range-grading. With absolute scaling the area of each symbol on the map is scaled proportionately to its value in the data. With range-grading values are broken into ranges (typically 3-5) using a classification method where symbols are sized based on the range they fall into (this is similar to the choropleth technique used for polygon data).

Use absolute scaling when you want your map reader to estimate relative magnitudes between individual values. Use range-grading to show magnitudes using classes that represent a range of values.

There are some important design considerations when making proportional symbol maps:

For more information on proportional symbols definitely check out Cartography: Thematic Map Design by Borden Dent where a lot of this information comes from!

Before we dive into the data preparation and map making process let's take a look at some details about the final map:

As mentioned earlier with absolute scaling the area of each symbol is proportionate to its value in the data. In future versions of CARTO.js and the CARTO Editor you will be able to do this on the fly. Until then this blog outlines the process to make a proportional symbol map using absolute scaling.

The topics covered are:

The data used for this map come from the World Bank Data Bank.

To get the data ready for the map:

The attributes in the dataset are:

country_name: the name of the country
country_code: the three letter country code
continent_name: the continent the country belongs to
pop_2015: the total count for 2015 urban population

Note: the SQL and CartoCSS in this blog assume that the name of your table is world_population_2015

To determine the proper symbol size for each country we'll do the following:

To simplify this to an equation:

Note: For a more detailed discussion on this calculation see Chapter 9 of Borden Dent's book!

For the final map (after some trial and error) I chose a maximum symbol size of 75px based on the values in the data the opening scale and extent. 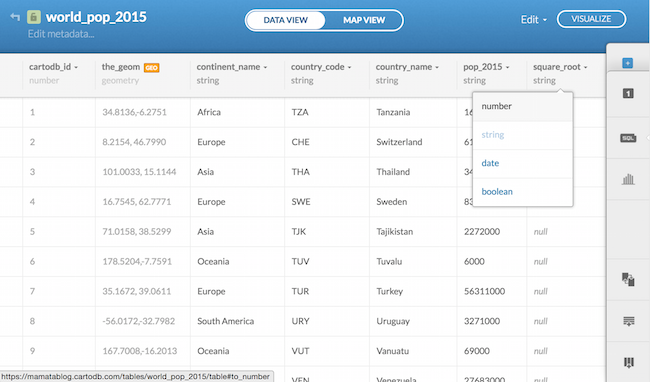 Now that we have decided on our maximum symbol size (75) and have the square_root field populated we can use that information to calculate the symbol_size for all other values in the data.

Let's take a look at our equation again:

With all of the information that we need we can construct the equation using SQL to update the symbol_size field:

If we look at the resulting sizes we can see that the country with the largest population (China) has a symbol size of 75 and all other values are scaled accordingly:

Now that we have the additional attributes in the data we'll walk through the steps to size color and define the drawing order of the symbols in MAP VIEW. 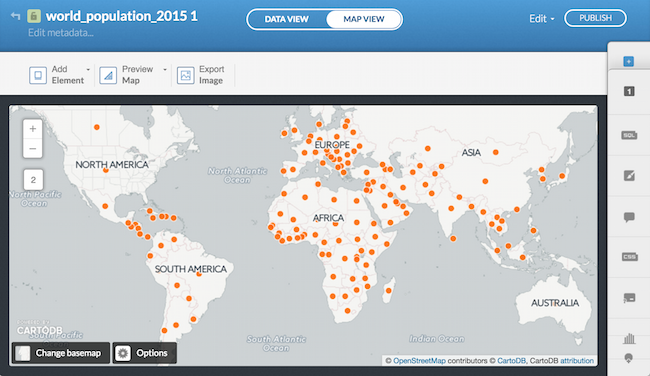 On the final map each symbol is colored according to its continent using the continent_name field. 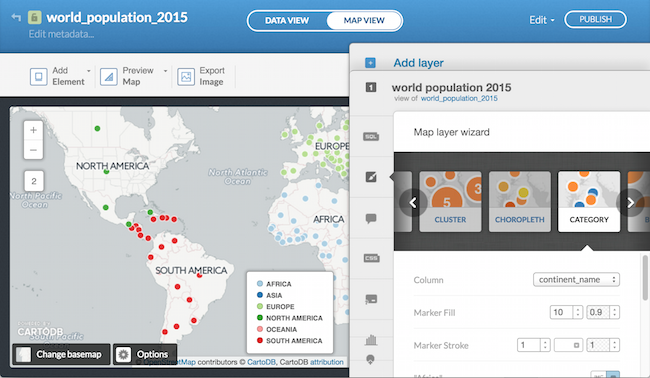 Next we'll size each point symbol using the values from our [symbol_size] field.

If you aren't satisfied with the symbol sizes after seeing them on the map you can change the maximum symbol size value and rerun the equation to calculate new values for the symbol_size field. 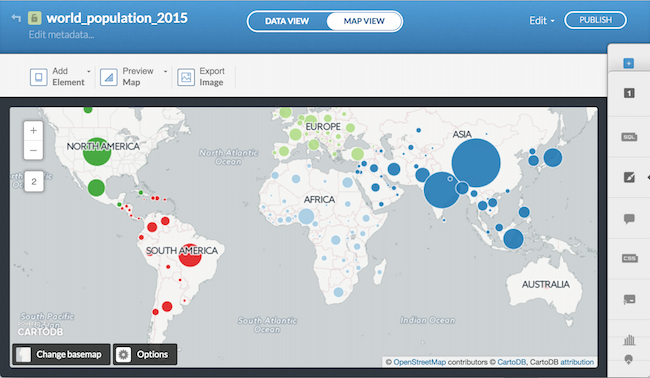 Similar to the drought monitor map I chose six different colors for each continent assigned them as variables and then replaced the default category colors. I also made a slight adjustment to the default marker-line-opacity from 1 to 0.8. 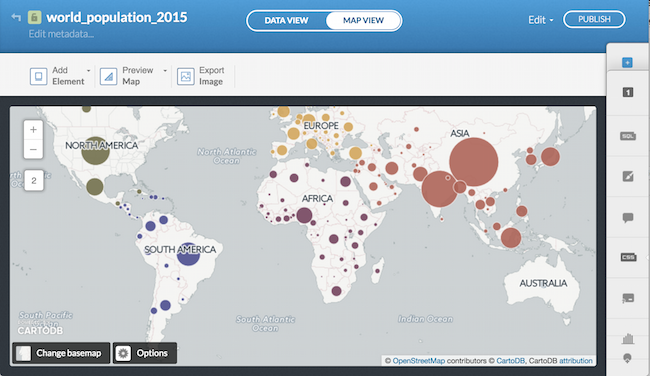 As outlined in the best practices section we need to make sure that smaller symbols are being drawn on top of larger symbols so important information does not get covered up. Looking around the map we can see that there are cases where this is happening.

To fix this we will change the default drawing order (from ascending) to descending using a field (symbol_size) in our data along with the SQL operator ORDER BY. This will force larger symbol_size values to draw first and smaller values to draw on top. 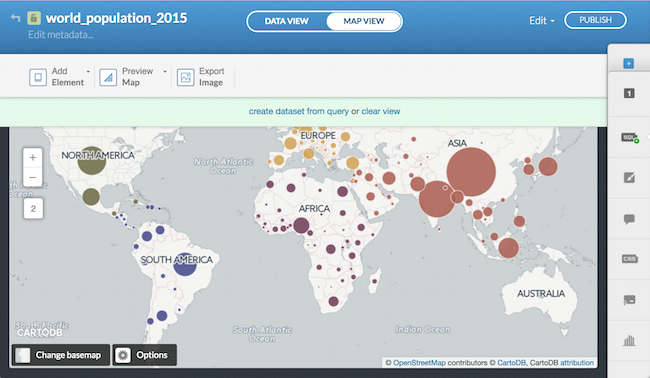 Since the map will be viewed from zooms 2-5 we need to size the symbols appropriately based on viewing scale.

We'll do this with zoom dependent styling that increases the symbol_size by a factor of 2 at each zoom level for the marker-width property.

At this point your map should look something like this where symbols are colored by continent sized by the value they represent in the data smaller symbols are drawing on top of larger ones and a symbol's size scales between zooms 2-5:

If you zoom into China you'll notice that at zoom 4 the symbol cuts off along a tile boundary.

We can fix this by increasing the map's buffer-size which adds additional pixels around each tile.

For the final map I designed a simple basemap in World Robinson. For tips on designing a basemap for thematic overlays in a variety of projections see this post and this post.

Alternatively you can use one of the default CARTO basemaps like Dark Matter (the lite version):

As discussed earlier legends are important for proportional symbol maps. For the final map I made a legend with three data points assigned them large medium and low values and then scaled them using the same formula that was used for all other symbols. I then positioned the circles and text using CartoCSS through zoom level.

I followed the same method for the map title description and data source text.

Proportional symbol maps are some of my favorite! There are a lot of interesting stories that can be told using this method in a variety of creative ways.

For example the final map from the blog can be taken further to include the World Bank's population projections for multiple time periods:

or to visualize 50+ years of cholera outbreaks around the world:

or for tiger counts in India: