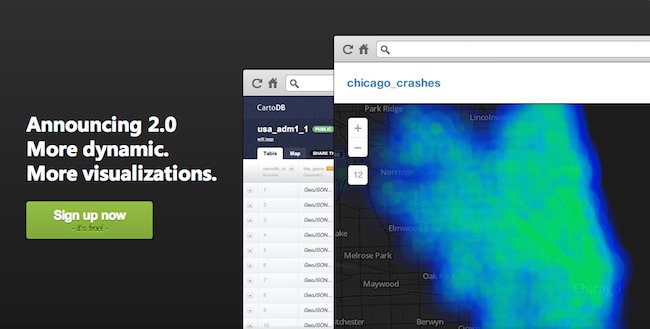 It has been a tough couple of months leading up to yesterday's release of CartoDB 2.0 but we're proud to say that this migration is now complete. While we initially estimated 6 hours it took a bit more however we never lost service. Some users got the new version earlier than others but no one lost service and all running visualizations kept working. Kudos to our Devops team and all developers!

This release takes a huge step forward in making spatial data visualization more intuitive and phases in new powerful data import analysis and visualization capabilities to our users. In short we really hope that this new version will let you take the reigns and deploy some amazing new visualizations. If you happen come up with something specifically cool please send it to us at comms@cartodb.com we love seeing what the community builds!.

Based on a new architecture and faster performance we'd also like to add that in the coming months we will be adding various new out-of-the-box visualization styles to CartoDB of which the first one slated is Torque. This new architecture will allow us to make constant platform improvements ever improving the service.

As with anything new there is the possibility of bugs so should you encounter any please don't hesitate to let us know at support@cartodb.com.

We will be highlighting here in this blog some of the new things available on this version so that people are aware of what has changed.

Finally we'd also like to share with you a great article that showed up on Talking Points Memo today about CartoDB and the direction in which we're headed. You can read it in its entirety target="_blank">here.