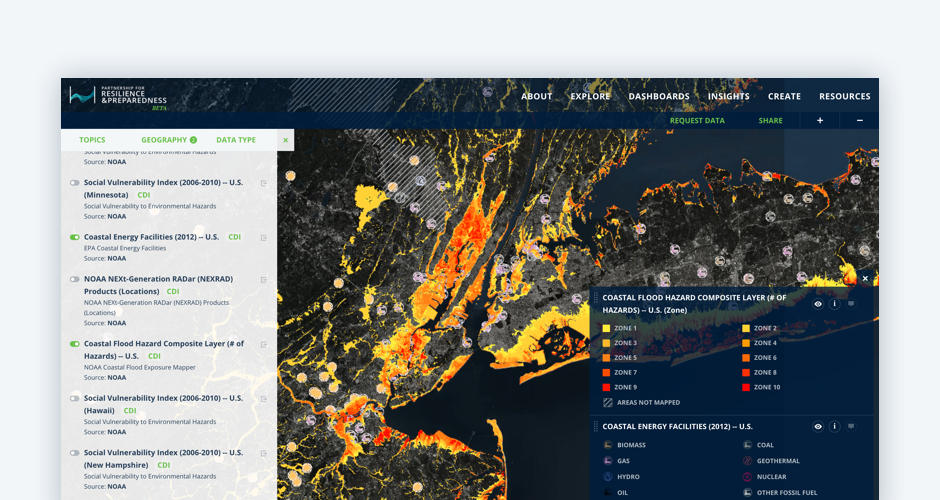 CARTO is proud to announce its involvement with the Partnership for Resilience and Preparedness (PREP) an international coalition empowering global resilency planning through the production of accessible platforms that can convey climate data as meaningful information to non-specialists.

"PREP will leverage open data and open-source computing to help planners build resilience in their communities by connecting those making decisions with the data they need in a format they can use " explains Janet Ranganathan WRI’s Vice President for Science and Research.

PREP's data revolution with its democratic impulse to translate climate data into transparent accessible information for non-specialist users echoes our own founding principle here at CARTO. We believe that self-service location intelligence and data visualization of climate data are vital for preparedness strategies and resiliency planning and the success of harnessing this data revolution's insights relies upon the ability to convey a meaningful story articulating the local impacts of this imminent global crisis for a general public.

Learn more about CARTO's commitment to democratizing data in the face of the storm.

To enable the data revolution to translate into collective action PREP launched an open-source agnostic technological beta platform. This approach empowers users around the world to pull relevant information into their own data-driven apps - from PREP partners including NASA NOAA and DOI. Currently the beta platform is servicing select domestic and international locations such as Sonoma County California and Porto Alegre Brazil and PREP plans to scale up over the next 12 months providing the beta platform and data-driven apps to partners worldwide.

PREP's joint-venture is an important step forward in resilience planning and CARTO will continue translating open data into meaningful information through data storytelling and analysis to engage the global community.