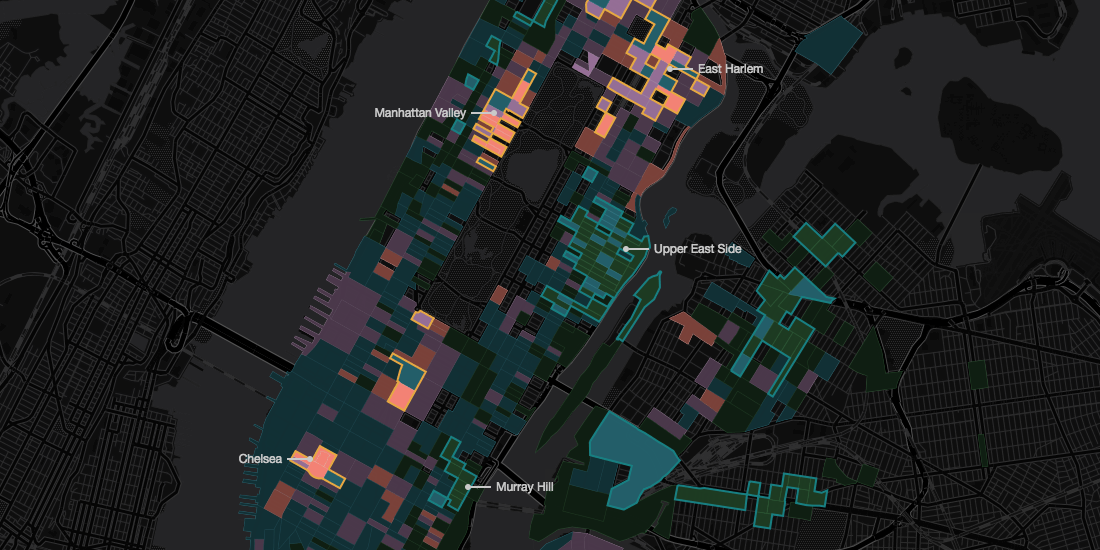 Airbnb has become a lightning rod for controversy regarding the so-called sharing economy. In tight housing markets -- particularly New York City and San Francisco many have claimed that Airbnb contributes to the displacement of longtime poorer residents.

These reports are alarming but no one has tried to map a central issue -- namely the concentrated neighborhood impact left from Airbnb's heavy concentration in small parts of cities. By leveraging US census data in CARTO's Data Observatory it's possible to isolate Airbnb's impact upon neighborhoods at a block-by-block level.

Inside Airbnb data is incredibly detailed that visualizing every point would actually limit our ability to extract clear information. A quick glance at a point-based Airbnb map shows that listings are concentrated in centrally-located city areas but because all points look alike on point-based maps it is difficult to account for a neighborhood's distinct characteristics. Our challenge was to visualize Airbnb listings in a way that would make clear what their impact was at the local level.

We wanted to understand the effect of Airbnb as experienced by residents at the level of a neighborhood and/or single block. Below we will work through several techniques for aggregating and exploring Airbnb data in the context of the American Community Survey (ACS). The ACS provided us with information about the population across the US at the block group level.

We have been making more and more 3rd party datasets like ACS available to CARTO users. Check back for more announcements soon or get in touch if you are interested in taking advantage of this work.

Our first analysis of the Airbnb data aggregated point data into block groups to show the concentration of listings per square mile. Next we used a statistical method called Moran's I to cluster and highlight areas of statistically significant high or low rates of Airbnb per square mile.

You can see the results in our first map below. While this still does not incorporate neighborhood characteristics it does provide greater visibility of high-density listing clusters running from the Lower East side up most of Central Park in Manhattan as well as small clusters in Brooklyn's Williamsburg and Clinton Hill neighborhoods.

A more nuanced analysis leverages the ACS to look at what percent of housing units in each block group are listed on Airbnb. This approach as shown in the second map above reveals significantly different clusters of Airbnb per square mile. While Airbnb listings are dense in the Upper East and Upper West Side of Manhattan it is actually a significantly "low" percentage of housing units in those neighborhoods. In contrast the two Brooklyn clusters are much larger with nearly the entirety of Williamsburg and Greenpoint Airbnb listings at high rates.

The reason for these differences is housing density. The Upper East and Upper West Sides of Manhattan are high density neighborhoods which means that even if there were many listings the neighborhoods could more easily accommodate these units because of the existing large stock of apartments.

Manhattan also had several neighborhoods with a large percentage of apartments rented out via Airbnb including the Lower East Side both East and West Villages and Hell's Kitchen. These Manhattan locations are heavily affected by Airbnb rentals.

The sharing economy and the rental market

While a large percent of housing units on Airbnb may change a neighborhood's character it does not give many clues about what effect Airbnb may have on an area's rental prices.

A simple solution might be to map Airbnb prices across the city. However mapping Airbnb prices in New York yielded few surprises (top map below). Apartments are much more expensive to rent in more desirable areas such as Tribeca Soho Flatiron and just south of Central Park. The cheapest Airbnb listings were found in more distant neighborhoods at the north end of Manhattan and in Brooklyn near the south end of Prospect Park through Crown Heights Bed-Stuy and Bushwick.

To dig a bit deeper we compared median Airbnb listing prices to median rent for every block. We found that high profitability clusters in Manhattan centered around Chinatown East Harlem and Manhattan Valley just west of Central Park. These are neighborhoods where the median Airbnb listing costs 25% of median rent. Phrased differently a resident of one of these areas could easily pay a month's rent by renting his or her apartment through Airbnb jin only four days! Williamsburg was the only large high-profitability cluster in Brooklyn and its median Airbnb listing would allow a person to pay rent in just five days.

These are neighborhoods where the median Airbnb listing costs 25% of median rent. Phrased differently a resident of one of these areas could easily pay a month's rent by renting his or her apartment through Airbnb in only four days!

Areas such as Crown Heights and Bushwick were less profitable for residents looking to subsidize rent costs through Airbnb listings which is perhaps a result of these neighborhoods' lesser-known tourist attractions. Interestingly while more well-known areas of Brooklyn and Manhattan - the Upper East Side Park Slope Cobble Hill Ditmas Park and Prospect Heights - were in high demand residents would need to rent a median apartment at the median price for at least ten days in order to cover a month's rent. In considering the difficulties involved in arranging month-long rentals however it becomes difficult to justify listing an apartment on Airbnb rather than finding a long-term tenant in these high demand neighborhoods.

Living with the sharing economy

For people interested in where Airbnb and its users are having the biggest impact on communities these analyses provide good starting points. Our data visualizations allowed us to map relatively small clusters of blocks to locate areas with high percentages of available housing units listed on Airbnb while also locating where financial incentives may have played a role. These analyses provide new frames of reference though which to consider the ways in which Airbnb has impacted (and continues to impact) certain neighborhood characteristics.

What is exciting about applying these types of methods to available data in CARTO is that it allows us to work across the US all at once. In addition to New York City we completed these same analyses for many other cities in the US including San Francisco Los Angeles Nashville Austin Washington DC Boston Portland Seattle San Diego and Chicago. Use the map below to search for any of those cities and see the 'Median Days to Make Rent' with Airbnb.

If you are interested in learning about how location intelligence plays an essential role in the real estate sector and in data analysis please watch our recorded webinar.