Analyzing and visualizing large amounts of geospatial data has sometimes seemed like a pipe dream to many analysts involved in GIS or geospatial analysis. Limitations on file sizes or infrastructure that supports spatial analysis at scale have always seemed to keep this just out of reach.

There have been many different advancements in the accessibility of data analysis on large scale (tens of millions to billions of rows) geospatial data: scaled performance in Python  advancement in tools like PostGIS  cloud data warehouses  spatial capabilities in Spark  and GPU accelerated analytics.

In this post  we will take a look at two of these approaches: GPU accelerated analytics and cloud data warehouses with spatial capabilities.

If you have seen a map or dashboard powered by GPU accelerated databases or rendering  you know that these dashboards are fast and can display massive amounts of data. They can easily store  query  and visualize millions and billions of rows of data without significant need to prepare or transform the data.

If you are not familiar with GPUs  or graphics processing units  these are the same processing units that were meant to process video graphics. They are extremely powerful and can also be applied to accelerate other processes like databases or map tile rendering engines. NVIDIA is one of the leaders in applying this technology to machine learning  deep learning  and artificial intelligence  and companies like HEAVY.AI and Kinetica have applied the same GPU technology to geospatial databases and tiling services.

Traditional databases are generally powered by central processing units  or CPUs  the same processing units that run in most laptops and other computers. Both CPUs and GPUs can be scaled in a cloud computing environment  but GPUs can support 10s of thousands of cores where a CPU may have 8 to 30 cores (the more cores  the more tasks the unit can support).

However this doesn’t scale and is expensive

While GPU accelerated analytics provide fast analytics and visualization  these services have several drawbacks  the main being price and continuous running. Before we discuss the specifics  I’ll share an analogy that can help explain this in detail.

GPUs vs. data warehouses is like owning a car vs. taking an Uber

Imagine that you are deciding if you want to buy a car. You live in a city and you mostly get around with a mix of bike share  public transportation  and car share services like Uber.

Having a car would be very convenient  you can go anywhere you want whenever you want. However there are all the added costs (and time commitments) of owning a car: lease payment  insurance  parking  repairs  license plates  etc. You are paying for the car when you are using it and when it is parked for hours while you are sleeping.

With your other options  you can get the service that is appropriate for you at the time you need it  and you only pay for what you need  on demand. In addition if you want better service  like an upgraded car or faster pick up  you can choose to have that added cost.

When you are using a GPU accelerated geospatial service  the GPUs need to be running around the clock  no matter if you are using it or not. As you scale and add more data or dashboards  you may need to add more GPUs to keep performance up  and these services are expensive. Take this example from a a webinar from HEAVY.AI that compares the compute resources for their GPU accelerated analytics platform compared to Snowflake with Tableau:

This comparison would make it seem as if using a GPU accelerated toolkit would be the best choice  however there are a few key points to call out:

With that said  let’s take a look at the costs for the cloud services running the GPU accelerated services. It is using the AWS EC2 p4d.24xlarge instance (which is one of the most powerful and expensive EC2 services AWS offers) that costs $42.93 an hour (the services is currently listed as lower on the AWS pricing page).

Running GPU accelerated services is like owning a car

These estimates are also not accounting for licensing costs or other costs that may need to be accounted for. You could manually shut down and turn on the service as needed  scale the service manually  or provision some autoscaling as needed. That said this extra layer of dev ops also requires time and cost. Finally  if you add other dashboards or services to this server  you may need to provision additional services as more queries against this service could cause performance issues.

Double costs if you already use a data warehouse

At CARTO we took a different approach

Data warehouses are increasing in adoption and scalability  and are a great solution for managing and analyzing large amounts of geospatial data. They provide low cost and highly efficient storage and serverless or scalable compute resources with no management. This means you can run your queries and use massive computing power only for the time you need it.

CARTO has focused our efforts on integrating natively into these cloud data warehouses (including BigQuery  Snowflake  Databricks and Redshift)  not only for visualization using map tiles (which we will discuss below) but also spatial models and analytics  routing networks and queries  spatial indices  geocoding  and more. These processes run inside your data warehouse using simple SQL statements  and harness the tools you are already using and the serverless power of the data warehouse to scale the analysis.

Quick aside on map tiles and representations/aggregations

Let’s be honest here for a second. No web maps are actually visualizing every point in a 7 billion point dataset. Transmitting that much information in a map tile would be too much data to render quickly  and layering that many features would be visually useless.This is why all web maps when dealing with data at these scales rely on tools that either select a comparable representation of this data  or aggregate the data. You can learn more about the representation approach in this post. I also really like this article and supporting video about Datashader  which is a library in Python that provides static visualizations for multi-million point datasets. Both CARTO and GPU accelerated tools use these methods to render map data.

Most of the GPU accelerated tools also render map tiles in raster  or PNG tile format. A more modern approach is using vector tiles that allow for far more advanced visualizations and analysis using 3D  arcs  animations  and much more.

Visualizing wildfire risk for the 160K properties sold in Los Angeles in 2020.

In addition to tiling with standard geometry types  we have also released Spatial Index Tiles using H3 cells or Quadbins for BigQuery  Redshift  and Snowflake. These can render with just the index and perform aggregations automatically  and provide massive storage saving performance in your data warehouse (more in a future post).

Recently  I built two different maps to see how creating a tileset and a spatial index tileset in CARTO can compare to those in GPU accelerated instances using Google BigQuery and CARTO  specifically our Builder for visualizing the data and the Analytics Toolbox to create the tiles.

The dataset I used was the OpenStreetMap nodes dataset in BigQuery Public data which is a total of ~7.2 billion points. This is not an apples to apples comparison to the above HEAVY AI dashboard as it is 7.2 billion points of OSM nodes compared to ~11 billion ship path points in the AIS dataset  but the fundamental components like time to run and one time costs should not vary much.

The two versions sets I created are:

The major compromise you are making in this approach is that you are losing the capability to dynamically filter every data point and re-render the map as you do in the HEAVY AI dashboard. With some smart SQL and selective counts you can achieve some of those filters within aggregated views.

The first map actually uses two tilesets  one with a point aggregation with views above zoom 17 and one that shows the raw data below 17. You can set this zoom based filtering in Builder and set up your tilesets to control for the zoom levels.

Here is the SQL for the point aggregations and simple tilesets respectively:

The H3 map uses a new functionality to make spatial index tilesets. Once you assign an H3 or Quadbin index to the data  you can actually create the tiles with just that data point  no need for a geometry which is far faster than the other tileset creation methods.

So how does the performance compare between these different tilesets?

‍
The point based tilesets could be improved if I had stored the geometry  but generally the spatial index tiles are going to be far faster overall.

The cost is where the real savings will come. If you were to run these queries once a month and store the appropriate data this would cost roughly $31 a month  or $0.04 an hour  to store all the data and tiles for this use case  or a 1000% cost saving compared to a GPU accelerated instance!

As I mentioned  If you need that dynamic filtering with immediate response on the fly  then the GPU solutions do provide a good functionality here  but for all other use cases creating appropriate aggregated tilesets tend to provide good functionality and cost savings. The key question to ask is what are the true cost of the insights you are producing  and do the speed and answers provide appropriate value for this use case  and the infrastructure to support future use cases as well.

If you would like to find out more about how are customers are leveraging this approach for advanced spatial analytics at scale  then check out our customers stories below. Want to try CARTO out for yourself? Why not Sign up for a 14-day free trial or schedule a demo with our experts. 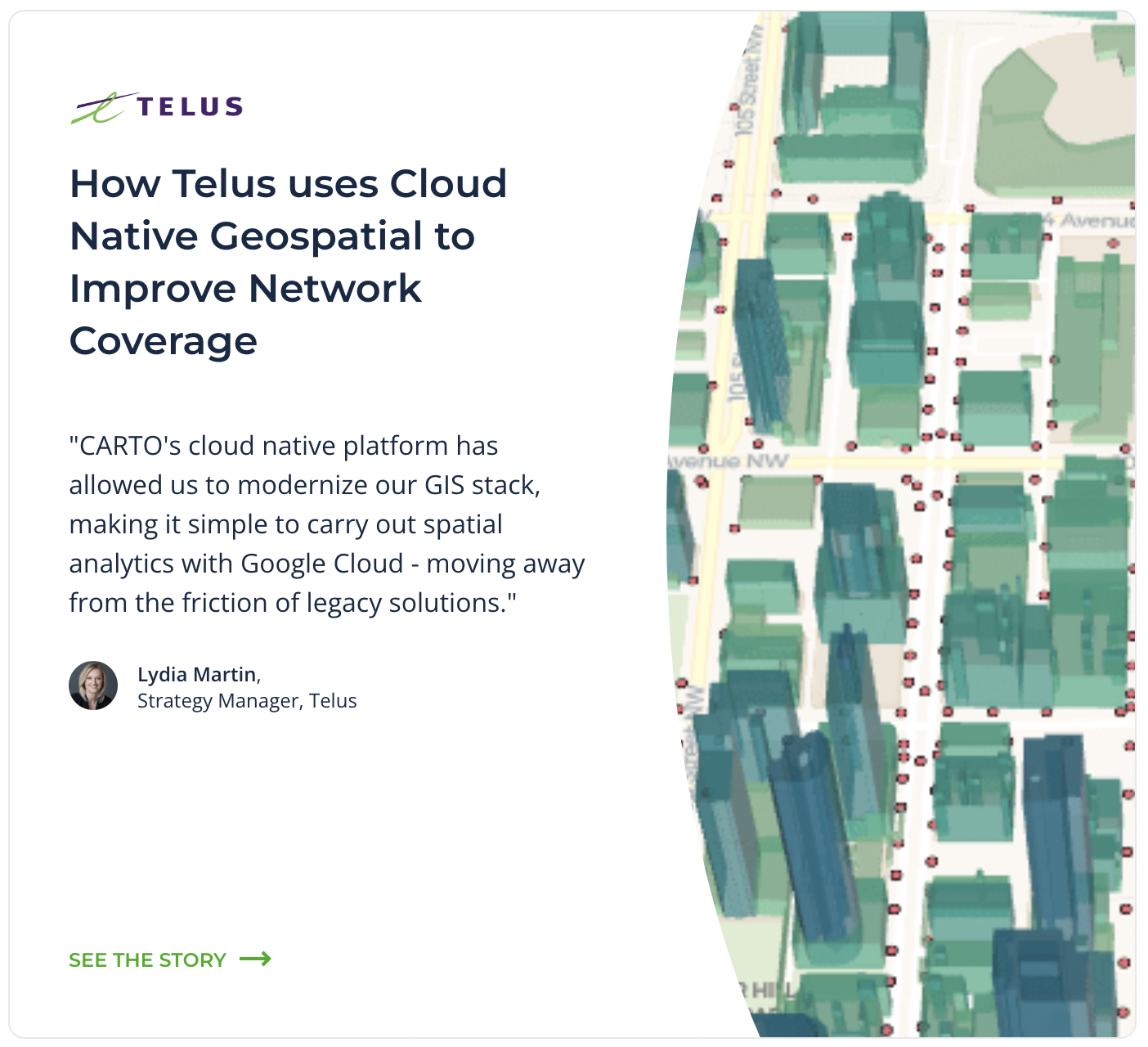 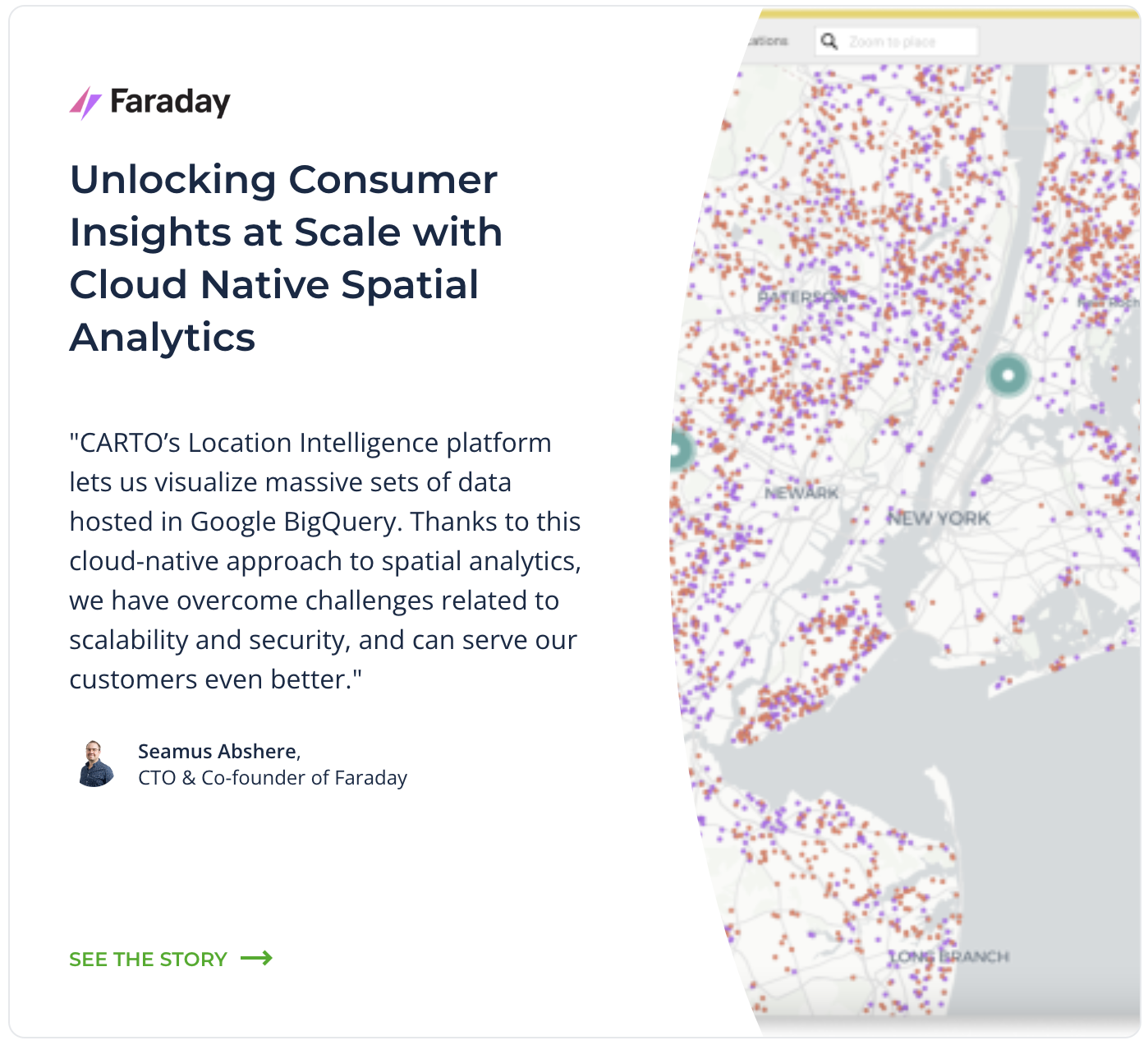 Want to tget started?
Sign up for a free 14-day trial