Is GIS dead? No, but it is undergoing a transformation - and we're excited to see how spatial analysis can continue to change our world. 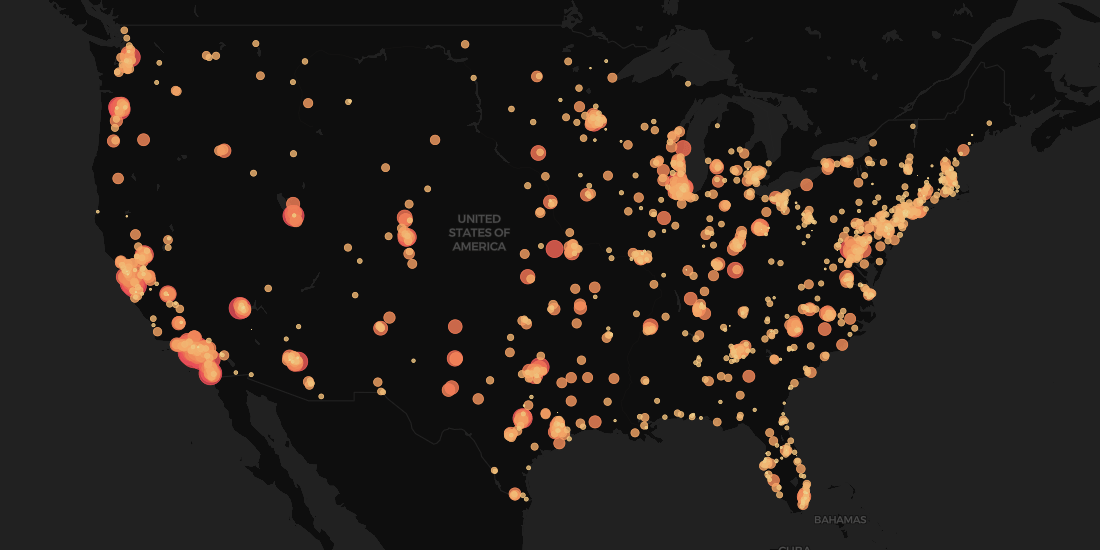 Yesterday was GIS day but here at CARTO we are even more excited to celebrate PostGIS day today for two reasons: PostGIS is the name of the beloved database system behind CARTO and second because we think is a great opportunity to reflect on where the GIS industry is and where it is heading.

A little while back — in 2012 when CARTO was starting - we could see a clear revolution coming to GIS on the web a revolution that involved the industry become more developer-friendly. I talked about it on a presentation controversially called "GIS is dead long live GIS". In a nutshell we needed better tools to build better products to take GIS to the masses.

Now 6 years after that presentation we've come a long way. Maps are no longer static assets on the web. Location data isn't limited to simple pins on Google Maps. Now we see compelling maps that mix advanced visualization and powerful web cartography in our day to day lives whether it's through work in academia private or public sector organizations or even in the media and news we consume. The revolution that we forecast has taken place and it's been one heck of a ride! But what about the rest of GIS?

Who are the new users and platforms emerging from the GIS revolution?

Before we can fully investigate the users and platforms emerging from this changing industry we need to understand what GIS is and what it means to different users.

GIS or Geographic Information Systems refer to varied types of information systems - they may be a website an application or a database that handles and stores different types of spatial data.

For most GIS professionals these information systems are a means to a more sophisticated end - like carrying out a location-based analysis ranging from simple reports to intersecting data to more complex spatial models.

GIS applies to a wide range of users all with very different use cases yet is one of those strange anomalies that despite its value spanning many industries has remained a niche field. From Retail and Real Estate to Biodiversity and Banking - having a GIS department and community is commonplace.

After 10 years of working with some of the most "spatially aware" companies we've observed 4 types of personas doing GIS today:

So if you look at those who don't know about GIS but are actually doing it we get:

It's clear that we are definitely talking about millions of users here - and all three of these groups are growing rapidly. Many would argue that the purist GIS community is not actually growing too much but the reality is that GIS is expressing itself beyond its own traditional community.

Many would argue that the purist GIS community is not actually growing too much but the reality is that GIS is expressing itself beyond its own traditional community.


Why does this matter?

GIS is exploding and our industry has never been bigger than it is now - with a growing number of players not only providing cross-industry platforms but also niche industry geospatial specialists. This means that GIS is happening where we're not used to it happening - outside of traditional GIS tools.

Geospatial is no longer a special niche it is blending in with other technology. This a great thing for everyone - apart from those who don't like blending in.


This has some important consequences:

So how fast is this happening?

Lots of GIS experts have already realized these changes. In fact at the latest edition of the Spatial Data Science Conference approximately 20% of our attendees came from a GIS background and were looking to connect with the world of Data Science.

Many external products in "cloud world" such as BigQuery Snowflake and Tableau are adding spatial capabilities but most of them aren't calling it GIS - they simply call them spatial offering them not only to the GIS industry but also to their core industries.

The Open Source world is also trailblazing with most innovation taking place thanks to non-GIS companies in an open way. Google Facebook and Uber have all made significant contributions - which is why we'll be joining them as part of the Urban Computing Foundation. Geopandas PostGIS QGIS Spark Arrow and MapboxGL are all further examples of this trend.

Academia is also playing its part. More than 30 academic institutions around the world now offer Spatial Data Science programs with Python Notebooks and R as the UI for learning instead of simply teaching GIS.

Progression of search queries for GIS vs BI and Data Science. ArcGIS vs Tableau and Python Notebooks. Source: Google Trends.

So is GIS dead? Absolutely not it's just reincarnating - and we're excited to see how spatial analysis can continue to change our world as we know it.