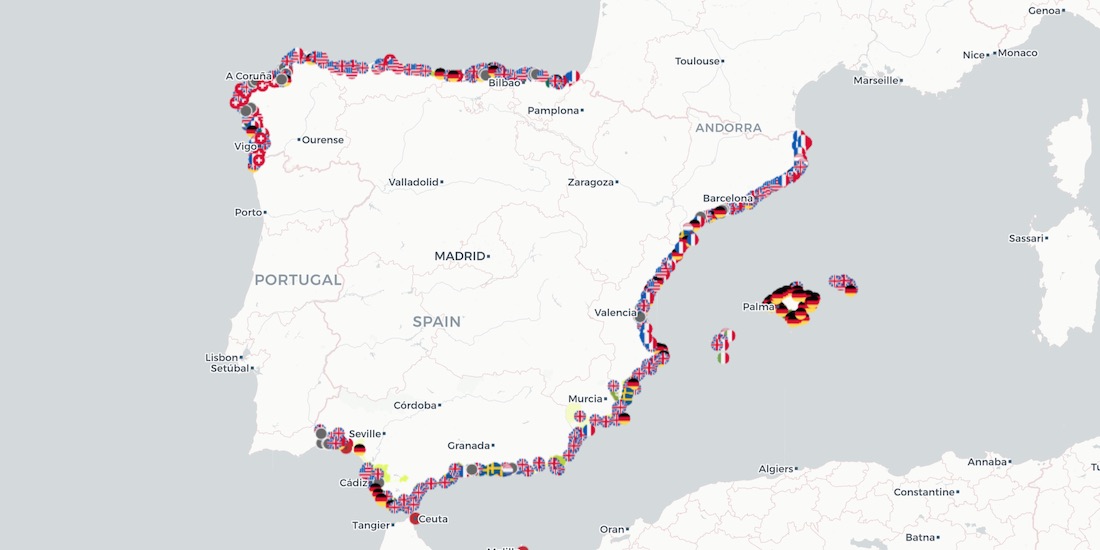 The slogan "sol y playa en España (sun and beach in Spain)" continues to attract people from all over the world to buy or rent a property in the Iberian Peninsula. So much so that 19% of web traffic to real estate listings for Spanish coastal property come from foreigners vs 81% from a national audience. Using geospatial analysis we decided to take a more visual look at the data and were able to identify some interesting trends.

According to the data the British Germans French & Americans were the most prolific visitors to adverts for coastal homes for sale or rental during June. Specifically the British are the most interested being the predominant nationality in 193 coastal regions. They are followed by the Germans who dominate in 127 regions and the French in 54. Americans Dutch Swiss Italians and Swedes are also among the nationalities with the most interest in buying a beach property.

Where does each nationality prefer?

The following map shows where the main nationalities look for a property on the beach:

As you can see the British dominate foreign demand for property in both Muxia (La Coruña) and Rubite (Granada). Unsurprisingly the British seem to show most interest on the Costa del Sol (Malaga). The most in-demand regions are Estepona Torremolinos Marbella and central Malaga. Property for sale in Ibiza is also attractive to the British in regions such as Santa Eulalia del Río.

Germans search mainly on the island of Mallorca and specifically in regions such as Deya Canyamel Cala d'Or Santanyi and Cala Ratjada. In fact within these areas the German interest in property outweighs that of the Spanish; more than 60% of the visits to advertised properties located in Cala d'Or Cala Ratjada and Santanyi are attributed to Germans.

Germans also look in other coastal areas of Spain such as the island of La Palma where the most popular region to buy a house is Puntagorda or Gran Canaria.

As for Americans they focus on properties in various regions of Barcelona such as El Masnou or Sant Andreu de Llavaneres and in various towns of Vizcaya (Barrika or Bermeo) Cádiz (Rota El Puerto de Santa María or Chipiona) or La Coruña (Rianxo Boiro or Arteixo).

Remarkably more than 50% of visits to property located in Los Silos (Santa Cruz de Tenerife) are from the United States compared to 43% from nationals.

Want to explore other geospatial use cases for Real Estate?

The French seem to have have a preference mainly for Roses Tossa de Mar L'Escala or Sant Feliu de Guíxols all regions located in Girona. They also look for property in Valencia (Meliana Miramar or Cullera) Alicante (Peñíscola Benicarló or Almenara) or Pontevedra (Vilagarcía de Arosa for example).

Italians continue to show their preference for the Balearic Islands. Specifically they focus their search in Formentera and Ibiza. However they are also searching in Fuerteventura in regions such as La Oliva San Bartolomé or Puerto del Rosario.

As for the Dutch Alicante proves to be a popular destination. In fact they are the majority in regions such as Benissa or Jávea.

Interestingly the Swiss seek cooler climates in La Coruña. Specifically the most popular towns are Cabaña de Bergantiño Camariñas and Fisterra. The region of Gualchos (Granada) also stands out since there is more demand there from Swiss visitors than Spanish nationals.

The most expensive and cheapest coastal regions to buy property

Having reviewed the main nationalities interested in buying property in Spain we also took a look at trends from some other nationalities. For example we can see that Russians are most interested in Ponteceso (La Coruña). Visitors from India also have an interest within La Coruña with the highest number of visits to Outes. Those from Hong Kong favor Pontejo and Camargo two towns located in Cantabria.

The Portuguese search predominately for property in Huelva in regions such as Ayamonte Islantilla or La Antilla. Uruguayans show interest mainly in two regions of Vizcaya: Ibarranguelua and Sukarrieta. Finally we can identify a cluster of buyers from Singapore who want to buy a house on Isla Cristina in Huelva.

To carry out this study we have used the location determined by the IP address of visitors to idealista adverts for sale or rent. Therefore it is not necessarily the nationality of the visitors but the country where the search has been performed. For example there may be searches made by foreigners from within Spain or by Colombians or Venezuelans living in the US and looking for a property to buy or rent on the Spanish coast.

Want to try some of this analysis for yourself?