Wind energy is poised to be a significant contributor to national decarbonization goals, while there is enough wind available to power the nation, local siting challenges could have national implications. See how NREL is using location intelligence to better understand wind potential and it’s interaction with national clean energy targets. 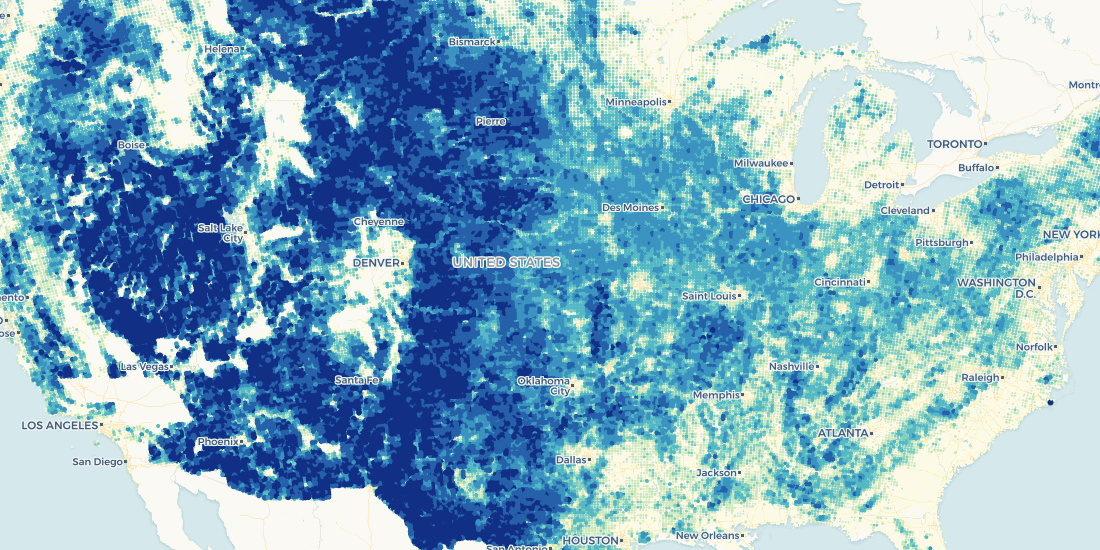 Onshore wind energy is among the fastest growing utility-scale renewable energy technologies in the world. With falling costs usage is on the rise with wind generation capacity increasing by a factor of almost 75 in the past two decades. With global capacity from onshore wind energy projected to reach nearly 750 GW by next year tens of thousands of turbines will need to be accurately sited by developers looking to achieve their maximum potential and profitability.

Wind farms are facilities made up of a group of high-power wind turbines connected to the power grid and are located in places that usually have a sufficient amount of wind available land and access to the power grid.

How else can Spatial be used in the Utilities Industry? Discover Next-Gen Use Cases

The National Renewable Energy Laboratory (NREL) specializes in the research and development of renewable energy energy efficiency energy systems integration and sustainable transportation. As a federally funded research and development center they are transforming energy through research development commercialization and deployment of renewable energy within the US. At CARTO Locations Anthony Lopez a Senior Researcher & Spatial Data Scientist at NREL talked about how Renewable Energy can be advanced through Spatial Analysis and Visualization.

In this post we take a look at some of the results from the first paper and how NREL are providing supply curve data and interactive maps to the research community.

Supply curves characterize the quantity quality and cost of renewable resources. Often developed within a scenario framework they capture a range of drivers that influence renewable energy potential. This foundational information serves as the basis for a variety of analysis and modeling applications including the interactions of wind energy project siting resource potential and power system evolution.

The interactive map below shows wind supply curves which characterize the quantity quality and cost of land-based wind resources. The geospatial data can be downloaded from the NREL’s website.

The interactive map below shows solar supply curves which characterize the quantity quality and cost of solar photovoltaic (PV) resources. The geospatial data can be downloaded from the NREL’s website.

In their approach to determine plausible locations for future wind farm developments the team of researchers were able to look at where turbines could be placed in relation to roads buildings waterways and other obstructions. Given the variation in state and local rules on how closely turbines can be placed to existing structures the team also analyzed three scenarios:

These scenarios were visualized within the report in order to show the extent of the restrictions and the developable onshore wind capacity:

Overall the analysis concluded that “despite the vast U.S. onshore wind resource potential siting restrictions can have a measurable impact on the future development of wind.”

In particular “different siting regimes lead to variations in future wind capacity with the greatest impacts observed under scenarios with high demand for clean energy. With the tightest emissions limit modeled 2050 onshore wind capacity varied by +7% (49 GW) in the least-restrictive siting regime to a decrease of 37% (270 GW) under the most-constrained case.”