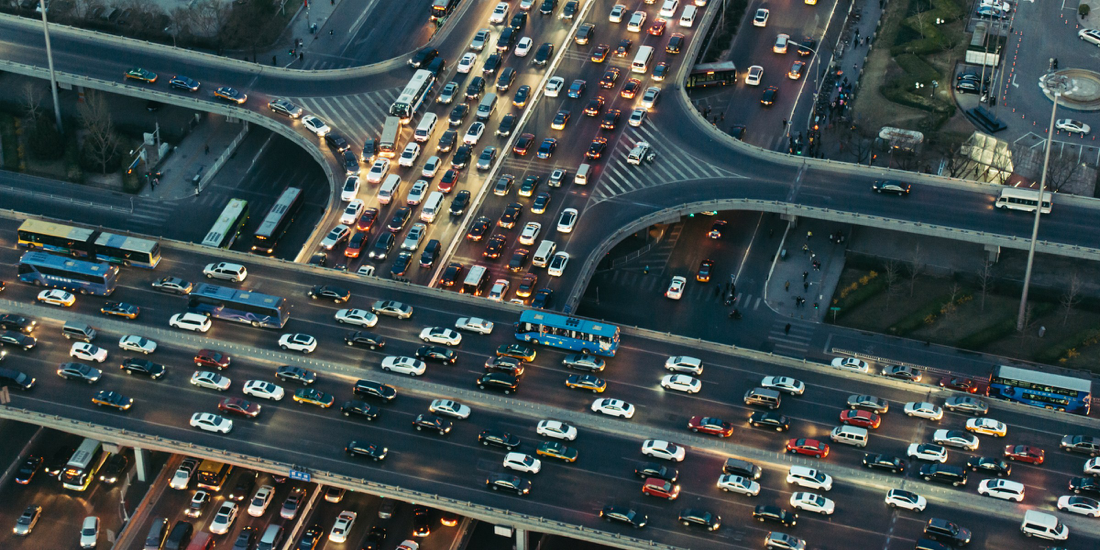 Vision Zero  a popular initiative aiming to eliminate traffic fatalities and injuries  emphasizes the need for more traffic data analysis. In understanding past mobility and movement patterns  cities and municipalities can better predict and prevent future accidents. As increased urbanization drives the need for more of these studies  let's take a look at working with location data streams to measure  monitor  and manage traffic and mobility safely.

Traffic impact studies typically examine volume  patterns and peak hours  distribution of trips  and travel mode  often using manual and analog methods for data collection. However  this approach results in high costs  lost time  and  more often than not  studies that cannot be replicated or scaled.

As a cost-effective  scalable alternative  our Vision Zero inspired analysis works with four types of location data to estimate the impact a hypothetical car ban along a busy street segment would have on local residents and businesses in Cambridge  Massachusetts. For this scenario our three objectives will be to:

Although our goal is answering these specific questions  the step-by-step workflow below can be replicated when working with location data in other situations.

For this scenario we're proposing a two-hour car ban running between MIT and Harvard Square  one of the busiest street segments along Mass Ave.  and quite possibly in all of Cambridge. First  to understand traffic fatalities in this area  we'll look at traffic accident data from 2010 to 2015 provided by the Cambridge Police Department.

We can see in the charts above that Fridays from 2pm to 7pm on Mass Ave. see the most traffic accidents  which allows us to conclude that a car ban during this time would have the greatest potential impact on reducing the number of traffic accidents.

When and where to add mobile data

Next  to identify who the ban will impact  we're using foot traffic derived from anonymized GPS mobile data  which  as the chart below displays  is quite representative of our population.

While datasets in the Data Observatory are calibrated with more advanced techniques to reduce bias and noise  here the linear relationship found from comparing mobile device counts with census counts confirms our assumption.

An advantage when working with foot traffic data is the added dimensions it introduces to standard traffic impact reports. Instead of just building counts on where people are located  mobile data can be viewed from several perspectives and altitudes  allowing us to create counts based on (1) travel mode  (2) socio-demographic profile  and (3) travel time trip patterns.

We extracted travel modes based on:

While some mobility patterns related to hour of day and day of the month are discernible  this pre-aggregated mobile data doesn’t give us much insight on trip volume counts along Mass Ave.

Aggregating point data to road segment lines on and around Mass Ave. yields more meaningful insights as the animations below display. The varying length and thickness of the line segments corresponds to the number of vehicle and pedestrian trips occurring each hour for four consecutive Fridays in February 2018 between 2pm to 7pm.

A closer look at each travel mode reveals further insights on mobility patterns.

Both our animation on the left and the chart on the right approximate vehicle traffic counts across four consecutive Fridays by the hour. By aggregating the anonymized mobile point data  patterns appear more clearly. For instance  it seems like traffic peaks occur around 5pm when people are probably commuting home from work. Our pedestrian charts and animation show similar 5pm peak traffic as well.

These steps produced estimations on pedestrian and vehicle trip counts along Mass Ave.  providing us with the following figures:

Mobile location data also helps us identify streets that would see traffic pattern changes as a result of our car ban. These larger effects can be discovered by looking at traffic along Mass Ave segments two hours before and two hours after a trip.

The animation above shows the two hours before and the two hours after a trip for approximately 15 000 trip trajectories. Every point represents someone who traveled on Mass Ave during the four consecutive Fridays in February between 2PM and 7PM. As the map radiates out from Mass Ave. (highlighted in yellow)  we see the spatial distribution of our car ban’s effects across the Greater Boston area.

Since this data provides 24 hour insights on mobility patterns  we've drawn socio-demographic inferences on user locations. We don't know where these mobile users reside  and for good reason. However  the 24 hour distribution of user pings from mobile devices  which the histogram below shows  let's us detect user locations between 3AM and 6AM  which we've classified as their "homes."

Our next step is to refine our population segments beyond traveler type to consider what  if any  impact our ban would have on different groups of local residents.

Learn about changes in the mobile data market from seasoned professionals in our recent webinarWatch Today!

We're going to segment census data using the Singleton-Spielman algorithm  a popular clustering procedure for segmenting census categories into more robust  multi-dimensional groups. We’ve bundled socio-economic and demographic similarities together in the three-dimensional graph below  but notice when we placed them on a map the clusters correspond to various regions across the greater Boston area.

These clusters represent more descriptive groupings than individual categories provided by census data alone. In addition  this method yields a smaller margin of error in each census estimate than if we hadn’t grouped them.

Mass Ave. drivers and pedestrians were bucketed into seven different groups. Some groups  like group 0  “wealthy white suburban homeowners ” are obvious  but again  confirming intuitions and common sense understandings is an important part of the analysis. Similarly  group 4  “middle class urban renters ” seems like a recognizable group of people of various races without children. And it follows that most of our pedestrian population would fall into group 4 while drivers primarily belong to group 0.

It appears the car ban would have a differential impact on drivers and pedestrians frequenting Mass Ave. Will disruptions to vehicle traffic be felt among businesses along Mass Ave.? And  if so  by how much?

Whereas foot traffic data told us how people access Mass Ave.  insights from transaction data help us understand what people are doing once they’ve arrived. It's no coincidence that a large portion of our descriptive capabilities refer to people's movement patterns and spending habits.

Mastercard Retail Location Insights enables the categorization of business venues by industry  and then calculates each industry's market share per cluster. The graphs below present our findings:

We can see that across clusters of all sizes  restaurant and food venues (purple) generally make up about 25% of the cluster. Another pattern involves hair and beauty salons which make up a larger portion of the cluster industry mix when we have increasingly smaller clusters.

The image below shows the number of venues in each cluster represented with proportionally sized circle charts that show the industry mix as well.

Since the car ban would eliminate driver visits  we want to identify micro-regions that pedestrians are most likely to visit  as well as the likely lift in store visits that venues can expect to see.

Proportional circles in the image above correspond to each business cluster and its number of “stays ” the third travel mode category mentioned earlier. We've defined “stay locations” based on distance and time thresholds where user pings falling within both thresholds are (1) grouped together  and (2) represented as a stay location based on the centroid of the cluster geometry.

Dividing the number of visits (100) by the number of venues (36) we end up with a visit multiplier of 2.7 visits per venue  which provides an estimate on lift in store traffic per venue.

The visit multiplier establishes a measure for comparing differences. Whether it’s the number of venues in a cluster and foot traffic a cluster receives  or comparing lift in store visits and potential revenue  we're now able to quantify the added benefits our car ban would have on the local community in and around Mass Ave.

This traffic impact analysis is only a starting point and would requires further analysis in reality. At the same time  in a matter of days and without traveling to Mass Ave.  we created a traffic analysis featuring new dimensions and counts not found in standard studies and reports. And in finding these new dimensions  counts  and methods with location data  we can start finding new solutions to old problems like traffic accidents.