“CARTO explains how using hexagonal grids in your location-based analysis can lead to more efficient analysis and greater insight." 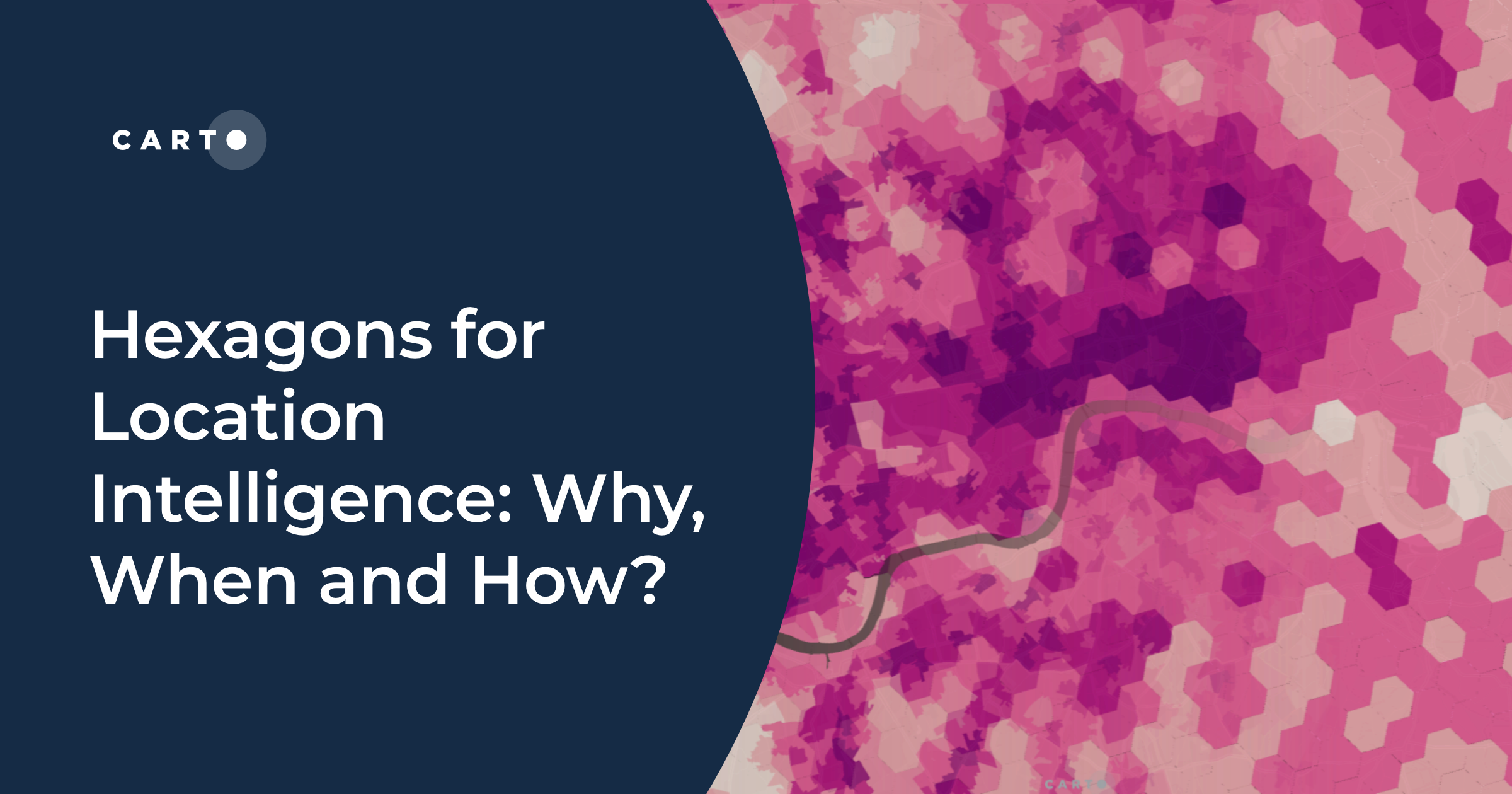 You’ve probably seen hexagon grids on maps, and maybe even created some of your own. But have you ever stopped to think about why? This is CARTO’s definitive guide to hexagon grids - what they are, why they’re so powerful, as well as how to use them.

The Basics of Spatial Grids - Regular vs Irregular Zoning

When you’re mapping with contiguous spatial polygons, there are two main zoning types: regular and irregular.

Regular zones retain the same shape and size over space (although this can vary slightly for global grid systems - keep reading to learn more!). These may be squares  triangles or hexagons. Irregular zones are the opposite, with varying shapes and sizes - census tracts, counties and even countries fall into this category.

Most data in its raw form is collected at  aggregated to and shared as irregular administrative zones. One of the immediate problems with irregular zones is, well… they aren’t all the same! The graphic below from the UK’s government statistics body the Office for National Statistics  perfectly illustrates how complex administrative geographies can be. Regular zones are far easier for data scientists to work with as they are a great way of neatly collecting data from multiple zones into just one geography.

Another issue with irregular zones is that they don’t always make for “good” cartography. There are two main reasons why irregular zonal maps can be misleading - data boundary and perceptual bias.

Data boundary bias relates to skews in the data that can be caused by where boundary lines are drawn. Irregular data zones are not typically created or generated in an objective way  but drawn and selected for specific objectives.

You may have heard of “gerrymandering” - where boundaries are manipulated with the intent of creating undue advantage for a party or group. This method could also be used to justify or evaluate policy. A boundary placed in “just” the right location could mean make-or-break for a new train station  school or housing development. If you’re interested in learning more about the intricacies and quirks of administrative geographies (who isn’t!?) then you may enjoy CARTO’s blog on Census Oddities.

Perceptual bias relates to how choices made by a cartographer can change the way the user understands the map’s message and data.

Let’s illustrate with an example. The maps below show the retail landscape of Inner London. Darker pink areas are where residents have better access to retail services  as defined in the Access to Healthy Assets and Hazards dataset  available to all CARTO users via our Spatial Data Catalog. This dataset also contains information on access to health services  green and blue space as well as air quality ratings. This makes it an excellent source for understanding quality of life. Explore the interactive version here.

The map on the left shows the data in original irregular zones  known as Lower Super Output Areas (LSOAs). These are one of England’s smaller administrative geographies, generally formed of around 1 500 people or 650 households. This means they vary massively in size: 69.4% of England & Wales’ LSOAs (equating to 68.5% of its population) cover only 6.2% of its total area. In this map  it’s harder to see the data in smaller areas with high population densities  whilst larger  sparsely populated areas - such as parkland and industrial areas - dominate the map.

This perceptual bias is mitigated in the hexagonal map where we’ve enriched H3 resolution 8 grid cells, with the original retail access data to transform the data into a regular hexagon grid using tools from CARTO’s Analytics Toolbox - you can read more about how to achieve this later on. Learn more about regular vs irregular zones in our previous blogpost Stop Using Zip Codes for Geospatial Analysis.

So now you’ve had some background on how using regular zones can be beneficial, let’s talk about hexagons in particular.

A key benefit of them is that they tessellate to form a regular, contiguous grid. Only two other shapes are capable of this; squares and triangles. However, hexagons have a number of advantages over these other shapes:

What Should You Consider When You Map with Hexagons?

Despite us professing the benefits of hexagons for mapping in this blog post, regular grids - and hexagons - aren’t always the optimal solution for your map. Some things to consider when deciding whether to use a hexagonal grid include:

One of the grid systems available via CARTO is H3: a multiresolution hexagonal global grid system with hierarchical indexing developed by Uber. Unlike standard hexagonal grids  H3 maps the spherical earth rather than being limited to a smaller plan of an area. H3 grids provide a direct relationship between grid cells at different resolutions  enabling extremely performant spatial operations. H3 grids are extremely well suited to machine learning and are ideal for users wishing to model flows and movement. The grids are available at 16 different resolutions, with the length of a single side measuring at its smallest 0.5 meters  reaching to 1 108 meters at its largest.

Global grid systems like H3 provide a workaround to the longstanding geospatial problem of the storage of raster data. Storing raster data (as opposed to vector data - see our blog post here to understand the difference) in data warehouses is generally not possible. Utilizing continuous grids like H3 allows for a similar geographic model as raster data  but whilst still being able to take advantage of more performant  cloud-based data storage solutions.

There are multiple methods of accessing H3 grids in CARTO  for example the query below extracts all resolution 9 H3 polygons which cover the extent of Los Angeles county.

CARTO users can access pre-enriched H3 grids with a wide range of variables including:

Users of CARTO can also take advantage of our Analytics Toolbox to perform complex, reproducible and scalable analysis on their gridded data. We have developed a variety of H3-specific functions - keep reading to see this in action!

Methods for aggregating data to regular grids are numerous and depend on a variety of factors such as whether the aggregate variables are extensive (e.g. total population in a hexagon) or intensive (e.g. average population income). Methods may include counting  summing or averaging the feature/variables based on their spatial relationship with each hexagon. This could include being within  intersecting or being within a distance threshold.

Traditional aggregation methods would typically be performed with tools that involve multiple processes and even software packages. They would also commonly generate a lot of “dump” data i.e. data files which represent the output of one stage of the analysis  but once that stage is complete are no longer useful.

These downsides are eliminated when working with cloud-native location analytics and Spatial SQL.

Spatial SQL is a “rising star” in GIS, offering a versatile ,efficient and scalable way of analyzing data - you can read more about the benefits and use cases for Spatial SQL in our “The State of Spatial SQL” report. CARTO’s Location Intelligence solutions allow for in-app, in-browser SQL querying  eliminating the time-consuming  error-ridden process of export-transform-load - read more.

CARTO has developed a series of enrichment tools for easy and seamless transfer of data from irregular geographies to regular grids. This eliminates the need for multiple processes, software or “dump” data.

You can see this in action below. We’ve used the DATAOBS_ENRICH_GRID() functionality from our analytics toolbox (available for BigQuery and Snowflake warehouses) to enrich our resolution 9 H3 grid with some relevant data. This functionality allocates these variables to our grid based on the % area of the raw dataset which falls within each hexagon. There are multiple versions of this enrichment tool available depending on the type of geometry you’re enriching and whether the source data is derived from our data catalog or your own data sources.

We can also use this tool to enrich our grid with data from multiple layers at one time; here we’re taking the total population and number of financial services from the Sociodemographics dataset and average retail services score from Access to Healthy Assets and Hazards.

Full documentation on our analytics toolbox, H3 and enrichment capabilities can be found here - you can also follow this tutorial for more in-depth, step-by-step enrichment instructions.

Thanks for Reading About Using Hexagons for Location Intelligence!

I bet you never thought there was so much to know about hexagons! If you’re completely hooked and cannot WAIT to make your first hexagonal map, sign up for a free two-week trial to get started!

Want to give CARTO a try?
Sign up for a free 14-day trial