As many parts of the world enter into recession following the Coronavirus pandemic, read how Spatial Data Science can help identify areas with a greater risk 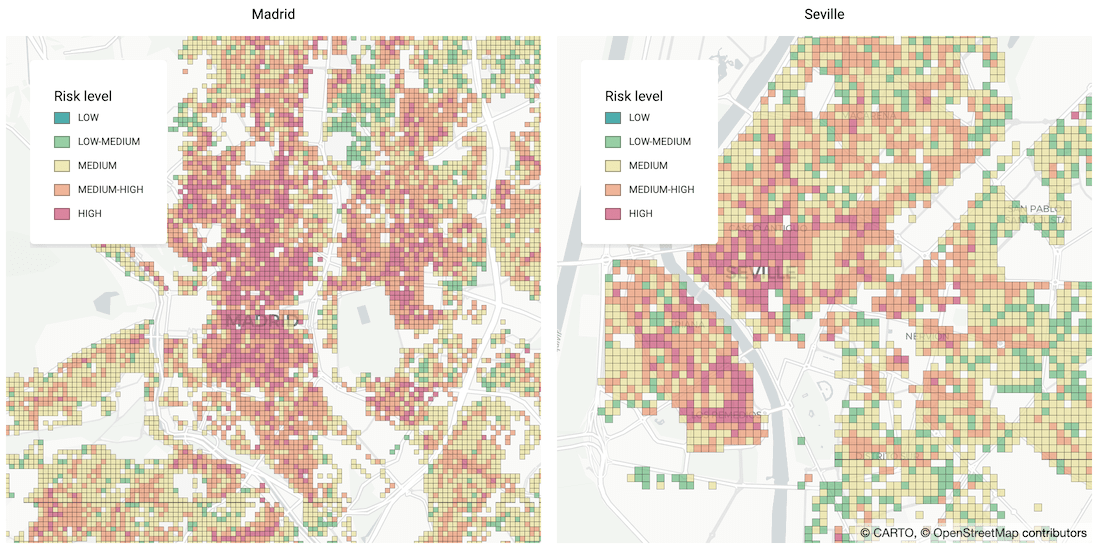 Due to the current level of uncertainty surrounding the Covid-19 pandemic  the effects of the upcoming economic recession are nearly impossible to predict; however  history tells us that there are certain sociodemographic  socioeconomic  education  and employment factors that expose certain groups of people to more severe consequences of an economic crisis. This time  and unlike in 2008  the economic recession will arrive following a global pandemic. The non-Pharmaceutical interventions (NPIs) applied by governments around the world; such as school closures  remote work policies  and shelter-in-place (lockdown) strategies to limit intra- and inter-national mobility  have caused additional havoc to certain economic sectors such as the retail and tourism industries. This also translates into an additional risk factor to the individuals making a living from the economic support generated by business activities in those jeopardised sectors.

Based on a series of aggravating socio-demographic and socio-economic factors  this study attempts to identify areas in Spain that have a higher risk exposure to the upcoming economic recession. To help build the risk model a set of indicators have been used that relate both to the population and economic activity in these areas.

In this study we collaborated with our data partner Unica360  and utilized some of their data products available in our Data Observatory.

The reasoning behind our selection of specific aggravating indicators from the different datasets available is as follows:

It is important to note that all these datasets are provided on a 100x100m grid covering the whole country.

For reference below is a listing of all features from the selected datasets used for the analysis:

The risk index was calculated following the methodology outlined in the article "Deprivation index by enumeration district in Spain  2011".

The methodology builds an index using Principal Component Analysis (PCA)  allowing us to reduce the dimensionality of the problem by capturing the majority of the variance in the resultant principal component.

Before applying PCA  we need to perform some pre-processing on the input data. First  we remove rows with insufficiently informed entries in their columns and then fill the missing values in the final subset of rows. To achieve this  we used the median value of the municipality for which the data in that row partains. Once there are no missing values within the input dataset  we standardize the data (a required step to run the PCA).

With the standardized data  we then check the Spearman correlation of each possible pair of columns  removing one if they show a Spearman correlation higher than 0.8. This equates to both columns providing the same information (and variance)  meaning we can safely remove one of them. We then apply the PCA  keeping only the first component (which will be our risk index).

In the image below we can see the different features considered in the first run of the PCA (having removed correlated features)  and the correlation of every feature with the privation index. This gives us a sense of the feature importance within our model. Those labelled in blue are the input features used for the second run of the PCA.

Next we compute a set of clusters for the index values so we can label each zone as having a low  low-medium  medium  medium-high  or high risk of being affected by the upcoming recession. To do this we apply the natural breaks (jenks) on the index values. This minimizes the variance between elements of the same cluster and maximizes the variance between elements of other clusters. In the image below we can see the values of the bins for the different risk categories resulting from the computation of the natural breaks.

Performing a high level analysis of the results across different areas of Madrid  we can see that areas with a higher risk (High or Medium-High) are those within the M30 orbital motorway and in the neighborhoods towards the south and south-west.

On the other hand  areas with a higher concentration of cells classified as Low risk or Low-Medium risk are located within the north and north-west in neighborhoods such as Aravaca and Chamartin.

The same occurs if we look at the "low risk" cells where distribution tends to be positively skewed  indicating that values are lower for these cells compared to the rest of the areas.

Looking at a different city  Seville for example  we can see that the distribution of high risk values is spread in two well-separated zones: the city center and the neighborhood of Triana. These two zones have a higher density of bars and restaurants and a higher expected presence of foreign tourism under normal travel conditions.

Also  we discover that the vast majority of the cells with a low and low-medium risk index are located in areas surrounding the city center  where there are more residential and less touristy neighborhoods.

As outlined during the introduction the aim of this study is to help identify areas in Spain that have a higher risk exposure to the upcoming economic recession.

Given the current global uncertainty along with the frequent and rapid changes in NPIs and governmental economic response  it is extremely difficult to predict with accuracy how and where the recession will have the most impact. Therefore in order to make a more informed prediction we have leveraged commonalities from studies referencing other recent economic recessions.

This study also provides a good example of how to combine indicators from different data sources in order to build a derived index.