Retail mergers and acquisitions are driving revenue increases, and in this post learn why retail analysts rely on Location Intelligence when making consolidation decisions. 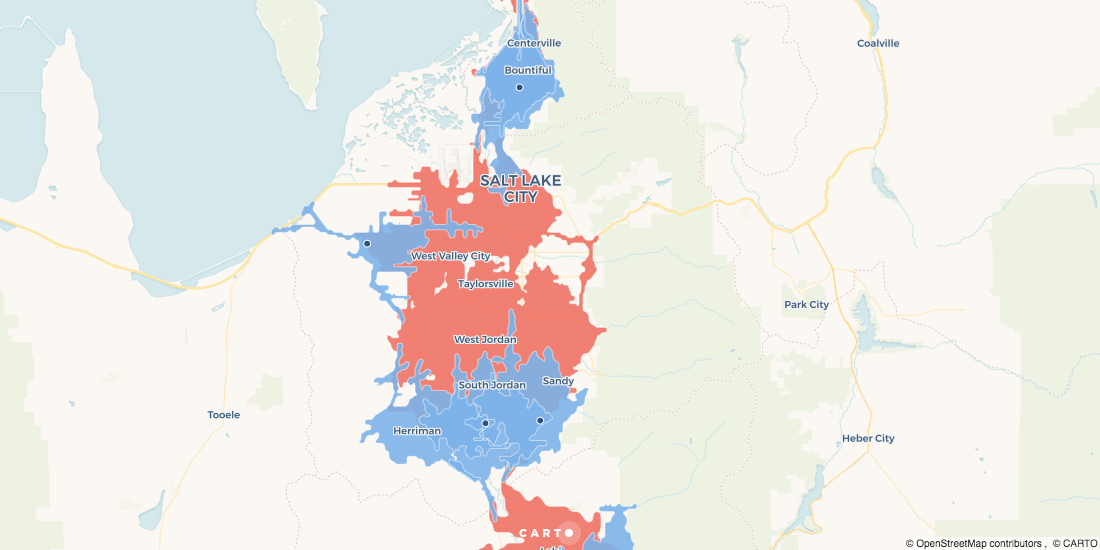 When Amazon announced its acquisition of Whole Foods for $13.1 billion dollars last year analysts speculated on what impact the “Amazon Effect” would have on grocery retail. However Bloomberg reports that the merger’s biggest impact was in the number of mergers and partnerships among competitors reacting to the news. The first half of 2018 saw record breaking merger and acquisition activity with U.S. based deals valued at an astounding $1.03 trillion dollars.

For months rumors circulated of a possible merger between Kroger and Target. The appeal of a merger centered on expanding Target’s online grocery services and providing Kroger customers access to a wider inventory selection thanks to Target’s existing infrastructure and distribution network. With a combined total revenue of $195 billion in 2017 the implications of this merger would be massive for the industry as well as the retail analysts and consultants tasked with consolidating more than 4 258 U.S. store locations of various formats with regionally distinct trade areas.

Mergers and acquisitions are inherently spatial processes which is why so many of these decisions are being made today using Location Intelligence.

In this post we’ll use the Target-Kroger scenario to show how spatial analysis provides better insights needed when making consolidation decisions. Although talks of a merger have ended we can use publicly available data to simulate the merger’s geographical conditions and with some basic spatial analysis begin to identify what stores should be consolidated to decrease sales cannibalization risks while increasing the reach of our total trade area coverage.

Because shoppers tend to choose supermarkets based on convenience many trade areas are designed based on travel distance and the assumption that anywhere from 50-80% of customers live within that zone. GIS approaches to trade areas tend to plot the location and then draw concentric rings based on travel distance around the store. In our case we need to search for Target and Kroger locations whose close proximity rely on the same or nearby trade areas to reduce sales cannibalization post-merger.

The map below shows the results of our find nearest search for all Krogers within a 2 mile radius of Target locations which are identified using an isochrone buffer.

274 Krogers are located within 2 miles of a Target location across the U.S. and were we to close these Krogers it would decrease the retailer’s footprint 22% nationwide. At the regional level however the impact is unevenly distributed.

In Phoenix Arizona for example 3 Krogers would be closed post-merger a 15% decrease that is below the national average.

In Chicago Illinois however 22 of the original 40 Krogers would close a 52% decrease that’s more than twice the national average.

What this stark contrast reveals is the limitation of find nearest analysis because it assumes randomness in the spatial distribution of the data. But consumer spending patterns are anything but random with contextual factors informing where when and what customers purchase.

Phoenix has a smaller population but a larger percentage of whom own and drive cars which would explain why the distance between Targets and Krogers is greater than in Chicago where more people take public transportation.

Distance isochrones exclude everything beyond their set parameters which means regional differences on trade area coverage are overlooked. In trying to consolidate stores to reduce sales cannibalization what we need to determine is where and to what extent trade areas for Kroger and Target stores overlap.

To expand our search beyond nearby locations we can add travel time isochrones to our simulation. Unlike distance travel time can help us make consolidation decisions that account for factors like consumer preference for convenience and regionally distinct road networks. Here we want to create travel time isolines for all remaining Krogers in order to:

We set travel time 3 minutes under the national average of 15 minutes and the overlap threshold at the higher end of estimations on percentage of customers residing within a trade area to identify the most stores at risk of sales cannibalization. Next we ran some spatial commands.

This time we identified 420 Kroger stores as candidates for consolidation which is 146 more than last time. Returning to Chicago in the map below shows an even further consolidation of Krogers but what is gained is an expanded trade area coverage all the way to Milwaukee:

Another significantly expanded trade area appears in and around Salt Lake City Utah:

Similar patterns appear around the country and since remaining Kroger trade area overlaps can be checked by hovering over the location we have a prioritized view on what store revenues to monitor more closely for potential sales cannibalization.

The map below shows the impact of this expanded market reach in and around the Portland Oregon:

Although Kroger would close a substantial amount of stores in this merger scenario it would achieve its goal of providing customers access to larger selection of merchandise and inventory using Target’s existing infrastructure. The map below shows the expanded infrastructure network for Kroger in and around Denver Colorado:

Our simulation produced results that provide a solid start for mergers and acquisitions that can be expanded in further analyses suited to specific situations. Some of today's most sophisticated retail site analysis are powered by Location Intelligence such as:

These are just a few ways that successful retailers are working with location data in an increasingly competitive market.