Discover how Point of Interest (POI) data can be used to uncover site selection strategies of leading brands in the US including McDonald's, Starbucks, & Subway 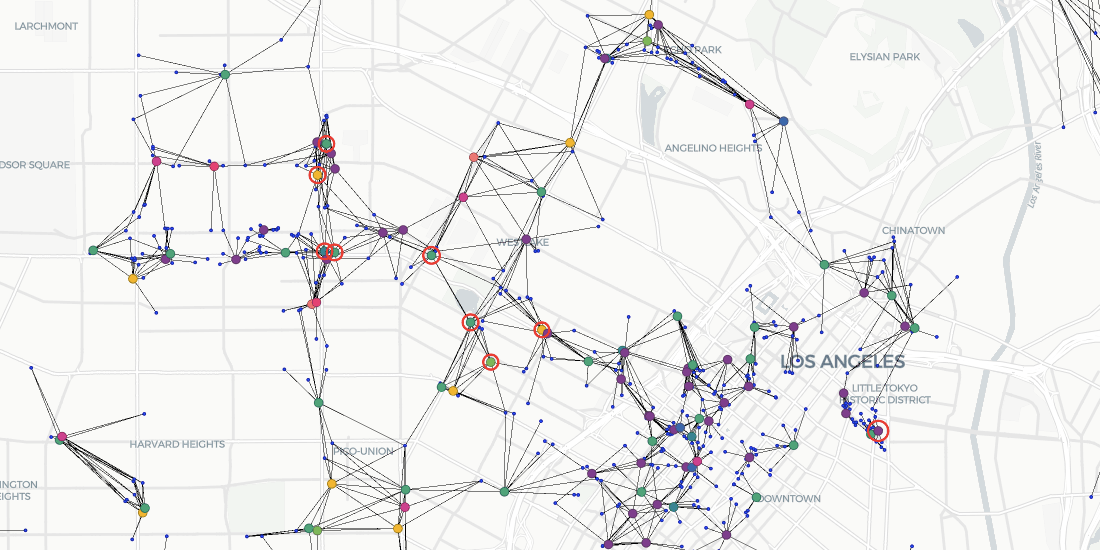 In the U.S. it can cost more than $1 million to open a McDonald's  Taco Bell  Burger King  or Wendy's restaurant. With such high levels associated with funding startup costs alongside ongoing fees for royalties  advertising  and other services it’s clear that ensuring the right location is paramount.

The ‘secret sauce’ of site selection in such a competitive market relies on being able to analyze the right data  but with so many sources available it can be difficult to determine the relevant recipe. Alongside this is the ability to understand and interpret the site selection strategies of nearby locations in order to pre-empt their expansion plans and gain a competitive advantage. Data that can be leveraged in such analysis includes financial  human mobility  behavioral  demographic  and the widely used Points Of Interest (POI).

Does proximity to other POIs influence where a new store is located? To answer this question  in this blogpost we use the locations of the largest restaurant and eating places brands in the U.S. to understand their underlying spatial planning strategy: if their locations are not random  what are the main factors influencing their distribution and do they include the proximity to other POIs?

See how CARTO can help

In this case study we will use Safegraph’s Core Places data  which is available from CARTO’s Data Observatory and provides complete business listings information for nearly 10 million POIs in the U.S. For this analysis we will consider the locations of the main restaurant and eating places brands in the urban areas of New York  Los Angeles  Chicago  and Houston. The main brands were identified as those with the largest number of POIs in all of the selected urban areas:

Analysis of the proximity network

To test whether the pattern of the locations of the selected POIs is determined by the proximity to other POIs  we start by constructing and analyzing the networks connecting each POI from the largest restaurant brands to its nearest 10 POIs. The first network is constructed deriving the nearest neighbors from POIs of the  same sub-category (i.e.  Full-Service Restaurants  Limited-Service Restaurants  Snack and Nonalcoholic Beverage Bars  Cafeterias  Grill Buffets  and Buffets). Similarly  the second network is obtained from the 10 nearest neighbors of the same top-category (i.e.  Restaurants and Other Eating Places) and finally  the third network considers the neighbors from any POI category (e.g. Clothing Stores  Grocery Stores  etc.).

We can also plot the network and compute the centrality of each node  as shown in the map below for the network constructed from the nearest neighbors of the same sub-category.

The centrality of each node was computed as the normalized closeness centrality: nodes with higher centrality have the shortest distances to all other nodes in the network. From this map we can derive the POIs with the 10 highest centrality scores in each city: over all urban areas  Subway fast foods are more connected to the 10 nearest restaurants of the same type (i.e.  their sub-category is “Limited-Service Restaurants”) compared to Dominos’ Pizza  whose restaurants are typically located in areas that are less crowded (in terms of similar POIs). All these insights start to provide clues on the different site selection strategies of the selected brands in relation to locating their restaurants in areas with high density of other similar places.

For the same network graph  we can also look at the inter-category network using a chord plot. These plots show the flow (represented by the arcs) between the nodes  with each node represented by a fragment on the outer rim of the circular layout. The size of the arc is proportional to the importance of the flow  i.e.  to the number of connections. This plot shows the connections when we only consider nodes represented by POIs of the selected restaurant brands:

Similarly  when considering the graph for the first-order distances of the selected POIs from POIs of the same top-category  we can see that in the majority of the cases Limited-Service Restaurants and Snack and Nonalcoholic Beverage Bars have as first neighbors another Limited-Service Restaurant and another Snack and Nonalcoholic Beverage Bar respectively.

Finally  we can also look at the intra-categories links  as shown in these plots for Starbucks stores.

The first plot shows the links between the Starbucks stores in the selected urban areas and the nearest stores of known brands of other top-categories with the largest number of links. We can see how Starbucks cafeterias are connected mainly to personal care stores and services (CVs  Walgreens) and grocery stores (Ralphs  Kroger)  as also suggested by the second plot  which shows the connections by top-category.

Distance-based modelling of the density of POI locations

While the preliminary analysis based on the nearest neighbor graphs has shown the importance of proximity effects on the pattern of the POI locations  it does not allow any comparison of these effects with other attributes that might also influence such pattern.

Specifically  we are interested in testing the size of the effect of the first-order distances (derived in the previous section) on the pattern of the selected POIs and compare it to the size of the effect related to other relevant attributes such as the density of businesses in the areas (restaurants  clothing stores  other amusement and recreation industries  etc). Here the density for each business category was computed using CARTO’s Spatial Extension for BigQuery as the number of POIs of that category in each quadkey grid at zoom 15 (ca. 1 km)  as shown in the map below.

The pattern of POI locations can be modelled assuming that the set of locations is generated by some random process and is known as a spatial point pattern. The hypothesis that we want to test here is that the pattern of the locations of the largest U.S. restaurant brands is not random and is instead based on an underlying latent field which describes the dependence on the proximity to other POIs as well as their density and the level of urbanity.

To test the contribution of the distance-based covariates to the intensity (i.e.  the density)

of the selected POIs  we can test two different models. The baseline model is a log-Gaussian Cox process where the linear predictor only includes as covariates the level of urbanity (

By comparing the Watanabe-Akaike Information Criterion (WAIC)  which represents the fully Bayesian approach for estimating the out-of-sample expectation  we can conclude that the second model  which also includes the distance-based covariates  has a better predictive accuracy for all the urban areas tested in this study  as shown in this table (lower values indicate better accuracy).

We also plot the random effects of each covariate  starting with the smooth functions for the distance-based covariates  as shown for the New York urban area:

Finally  we can also plot both the random effects for the urbanity-related covariates and the fixed effects of the density-based covariates  as shown in these plots for the New York urban area.

These plots suggest that the density of the largest restaurant brands also depends on the level of urbanity  with larger densities associated with medium and high density urban areas  as well as to areas where there is a larger density of other restaurants and other amusement-related POIs.

In this blog post we analyzed the pattern of the locations of the largest U.S. restaurant brands and found that similar and/or competitor brands “attract” each other. First  we found that the first-order neighbor is often from the same sub-category (e.g.  the nearest business to a fast food restaurant is almost always another fast food restaurant). Secondly  when modeling the density of the selected POIs  we showed how the nearest neighbor distance-based attributes significantly improves the model's predictive accuracy compared to a model only including the level of urbanity and the density of other relevant businesses. Moreover  the density of the selected POIs is found to decrease with the distance to the closest POI of the same sub- and top-category (as well as overall with the distance from the closest POI).

This analysis was facilitated by the comprehensive data offer of CARTO’s Data Observatory  which includes not only third-party and public data but also CARTO’s Spatial Features  offering a set of spatial features in standardized formats with global coverage. Fast and scalable analytics was made possible thanks to CARTO’s Spatial Extension  which provides a suite of cloud-native geospatial functions and procedures on top of the modern cloud data warehouses  including BigQuery and Snowflake.

Given the intensity or density surface

over a study region

and a point pattern

the likelihood of an inhomogeneous Poisson process is

yields a particularly flexible class of point processes known as log-Gaussian Cox processes. These processes are typically used to model aggregation in point patterns resulting from observed or unobserved spatial variation. A common method for performing inference with log-Gaussian Cox processes is to take the observation window  construct a fine regular grid over it  and then consider the number of points observed in each cell of the lattice. These are independent Poisson random variables and can be modelled with a generalized linear model framework. However  this approximation is wasteful (the covariance matrix is dense) and cannot be applied when gridding of the model covariates is not an option  as for example in this case where we are interested in the effect of the first-order distances for each POI.

is a multivariate Gaussian random vector and

following the Stochastic Partial Differential Equation (SPDE) approach for Matérn random fields and implemented within a Bayesian framework in the inlabru R package  is a set of piecewise linear functions defined on a triangular mesh. We can construct a mesh for each urban area  as shown in this plot for the Los Angeles area where the locations of the largest restaurant brands (red dots) are overlaid on the mesh.